The US military feared that Trump would launch a nuclear attack

The head of the Joint Chiefs of Staff took measures to prevent it during the last days of the former president’s mandate, according to a journalistic investigation

The chairman of the United States Joint Chiefs of Staff, Mark Milley, took action in January and ordered to be consulted should then-US President Donald Trump lean in favor of carrying out a nuclear strike. According to excerpts from the new book by journalists Bob Woodward and Robert Costa, ‘Danger’, to which CNN has had access, Trump’s presidential powers were thus curtailed due to the possibility that he would decide to take drastic measures after the assault on the Capitol , which took place on January 6. The ‘Washington Post’ journalists have thus pointed out that Milley even contacted the Chinese authorities to avoid a large-scale armed conflict and agreed with the Speaker of the House of Representatives, Nancy Pelosi, when she referred to the president’s mental health.

We can’t know what he’s going to do. You know he’s crazy. He’s been crazy for a long time, ”Pelosi said during a January 8 phone call to Milley. The military, for his part, assured that “he agreed with everything.” Milley also held a phone call with his Chinese counterpart, Li Zuocheng, to ensure there was no danger of an attack or other unpredictable act of a military nature in Trump’s final days in the White House. “We are prepared. Everything is fine, ”Milley explained to Li. “Democracy can be a bit quirky at times,” he said.

Assault on the capitol

The book also includes more details about Trump’s efforts to sideline Vice President Mike Pence and block Congress from certifying Joe Biden’s victory in the November 2020 election. According to information from Woodward and Costa, Trump “lost his way” on January 5 trying to convince Pence to “be on his side,” even though the vice president insisted on his constitutional duty to preside over Congress. 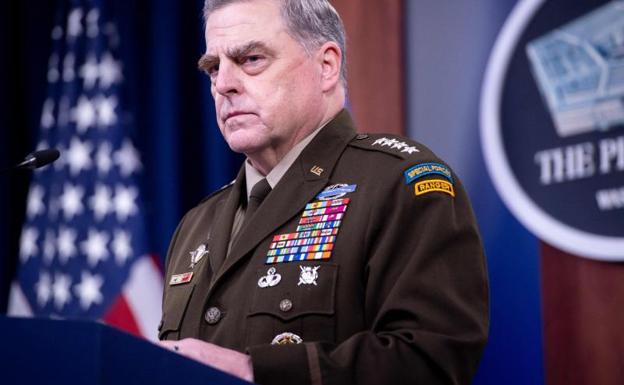 “Wouldn’t it be fun if you could do it?” Asked Trump, who threatened to stop being his friend if he didn’t. “No, it is not possible,” Pence would have answered as a mob of followers of the tycoon gathered in front of the Capitol for what would soon become an assault on the headquarters of the United States Congress.

Days before the assault, Pelosi raised concerns about Trump’s mental health and made a series of calls to the Armed Forces asking senior Army officials to conduct checks regarding possible attack orders, including nuclear strikes. However, Milley assured Pelosi that the necessary precautionary measures had been taken to prevent Trump from initiating any warfare, even if there is no evidence that this was his intention.

Milley did not inform Trump of the new protocol to follow, which involved the generals informing him of any such military decision before carrying out the president’s orders. “I can guarantee that regarding the use of military power, (…) we are not going to do anything illegal or crazy,” he stressed.

What does the Spanish team have to change to win against Georgia?