In the midst of the environmental crisis in the Mar Menor due to the death of hundreds of thousands of fish and mollusks, the average temperature reached in the middle of this month by the Mediterranean, 27.4 degrees, adds in the short term a known threat to the lagoon and its catchment basin. The danger, according to the risk calculation carried out by the State Meteorological Agency (Aemet), is called DANA. In September or autumn, severe torrential rains could cause flooding in urban centers and crops, as well as carry tons of mud and other sediments into the lagoon.

Several scientists have shown these days their fear that, as happened in 2019, when there were torrential rains in September and a massive death of fish in October (they appeared in Lo Pagán), the dragging of the ramblas and other areas would erode the farmlands . The runoff would flood inhabited areas and aggravate the pollution of the marine ecosystem, already seriously deteriorated by the entry of nutrients for decades, facilitating anoxia; that is, the lack of oxygen that kills the animals.

Study basins and their extension

In this context, and while the national and regional administrations announce projects to prevent floods in different municipalities, the Community of Irrigators of Campo de Cartagena and the Polytechnic University (UPCT) have come together to find solutions to three effects of these avenues: flooding of terraces, the erosion of agricultural soil and the arrival of sediments to the sea.

The key is to achieve “effective retention of the sediments throughout the entire watershed,” explains UPCT researcher Juan García Bermejo to LA VERDAD. This Civil Engineer has coordinated the design of a 973-kilometer long drainage network, which would allow runoff to be properly channeled and slow down the speed with which it moves through the coastal plain (a plain sloping to the southeast). In addition, the enormous accumulations of sediment in the mouths of ramblas such as those of El Albujón and La Maraña would be avoided. 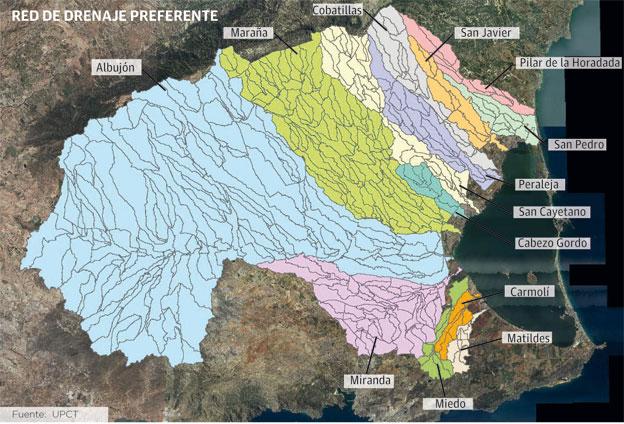 García, who belongs to the Hydraulic, Maritime and Environmental Engineering group of the Polytechnic, recalls that in June 2020 the Ministry of Water, Agriculture, Livestock, Fisheries and Environment presented the informative study to recover the drainage channels of Campo de Cartagena . In it, he analyzed the viability of recovering “those that were executed during the land consolidation work carried out in the late seventies and early eighties”; and found that “not in all sectors the land consolidation was completed, so there will be some in which the channels, even though they are publicly owned, have disappeared, and other cases in which the channels are privately owned and have also disappeared »By different land occupations.

With this work and a study of the year 2015, the community of irrigators chaired by Manuel Martínez promoted an agreement with the UPCT. The challenge was “to design and project the necessary networks” for the drainage of the waters that circulate through its 41,920 hectares.

The first was “to know how the circulating flows are distributed during rain episodes” in lands located in five municipalities: Cartagena, Torre Pacheco, Los Alcázares, San Pedro del Pinatar and Los Alcázares. With data from the National Geographic Institute and other organizations, Juan García and his team have completed a detailed description of hundreds of channels. And they have made an intervention proposal to recover old channels and enable others.

In total, the drainage area studied covers 1,145 square kilometers, with thirteen main basins and 474 sub-basins, with an average size of one square kilometer and reaching about 4 on the left bank of the Rambla de El Albujón.

The project, which would comply with the recommendations of the Ministry to adapt agricultural and livestock farms to the risk of flooding, proposes different formulas to tame the waters. These include preparing channels with gravel, placing dikes, introducing vegetation on slopes, improving agronomic practices, to ensure the impermeability of the protection hedges of the plots; and recover the use of terraced and wooded areas (planting, for example, citrus, almond and carob trees) in some boulevards and other natural waterways, such as those shown by aerial photos from the 1950s.

García pointed out that the creation of this network is compatible with the one already used by farmers. To facilitate this work, the University has classified the canals into three levels: those that would coincide with the water passages or traditional channels, which cross the irrigation community leading to external waters; those of retention of sediments; and those who collect runoff on foot from farmers’ plots. In the delimitation of the former, the Segura Hydrographic Confederation (CHS) and the Autonomous Community would have to intervene. And the ordering of the last two corresponds to the irrigators.

Manuel Martínez: “We get water from streams and urban areas”

The president of the Community of Irrigators of Campo de Cartagena, Manuel Martínez, repeats it over and over again: «We are involved in collaborating and contributing to the search for solutions to the problem of the Mar Menor, as evidenced by the agreement with the UPCT to improve the drainage system ‘. And he affirms that “you cannot blame the farmers” in his area, “who generate thousands of jobs, for the massive arrival of sediments into the sea, because the waters come from higher up, cross urban centers and public channels and flood and they devastate our plots ». For this reason, he asks for “a clear roadmap” from public administrations and to take action now. 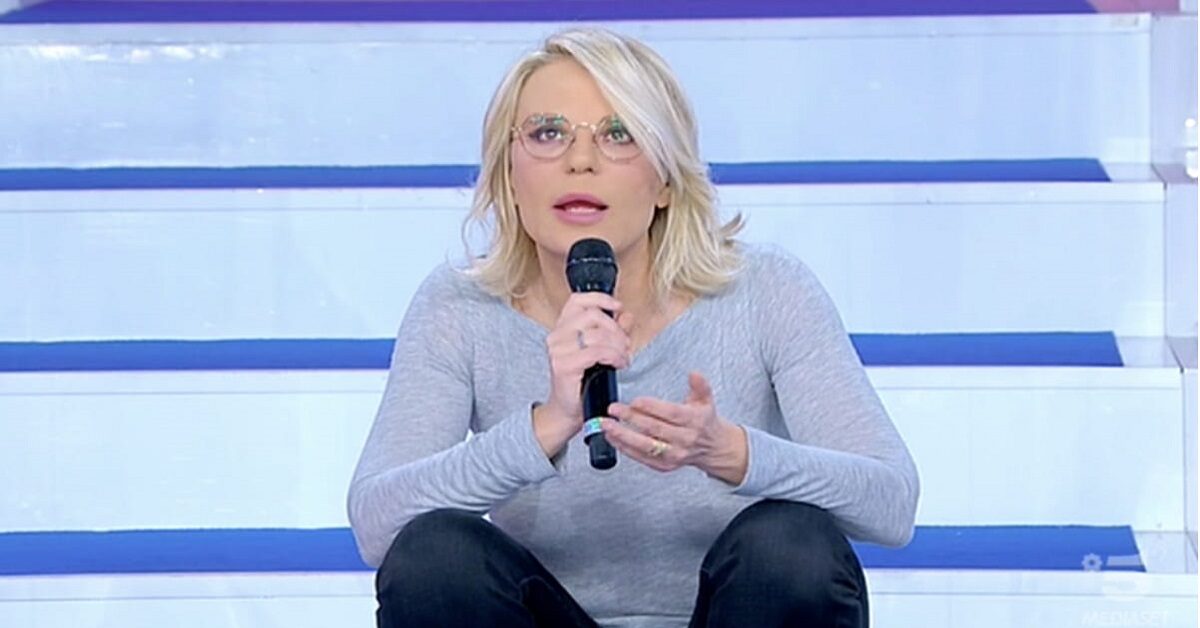 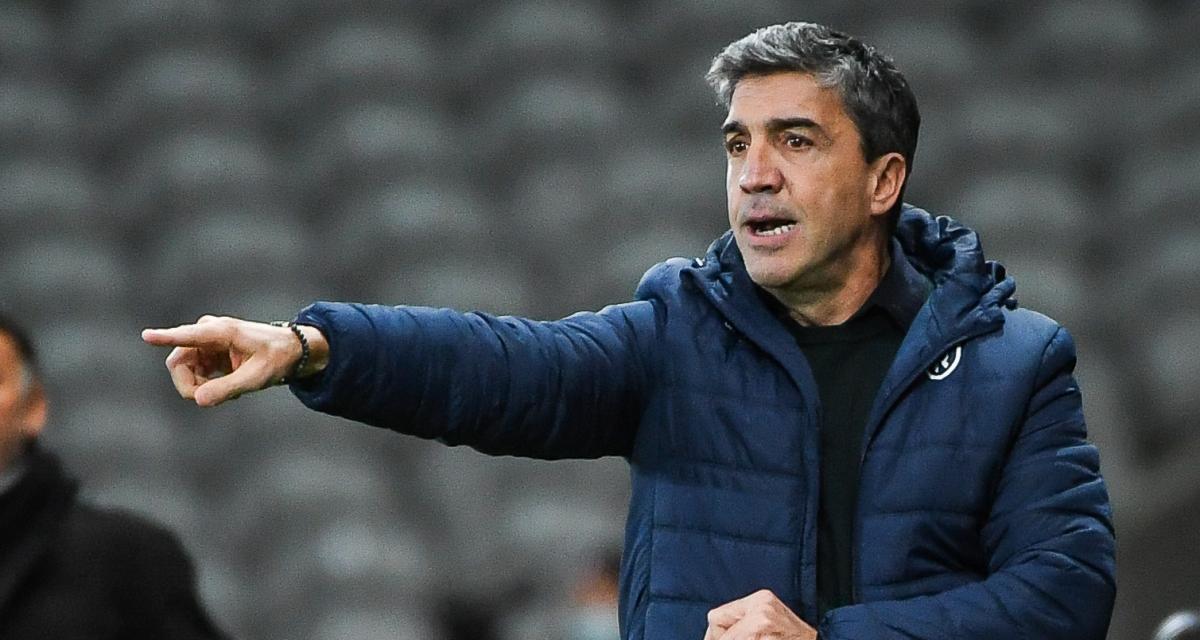