The unknown preacher Martin Luther and his planetary revolution 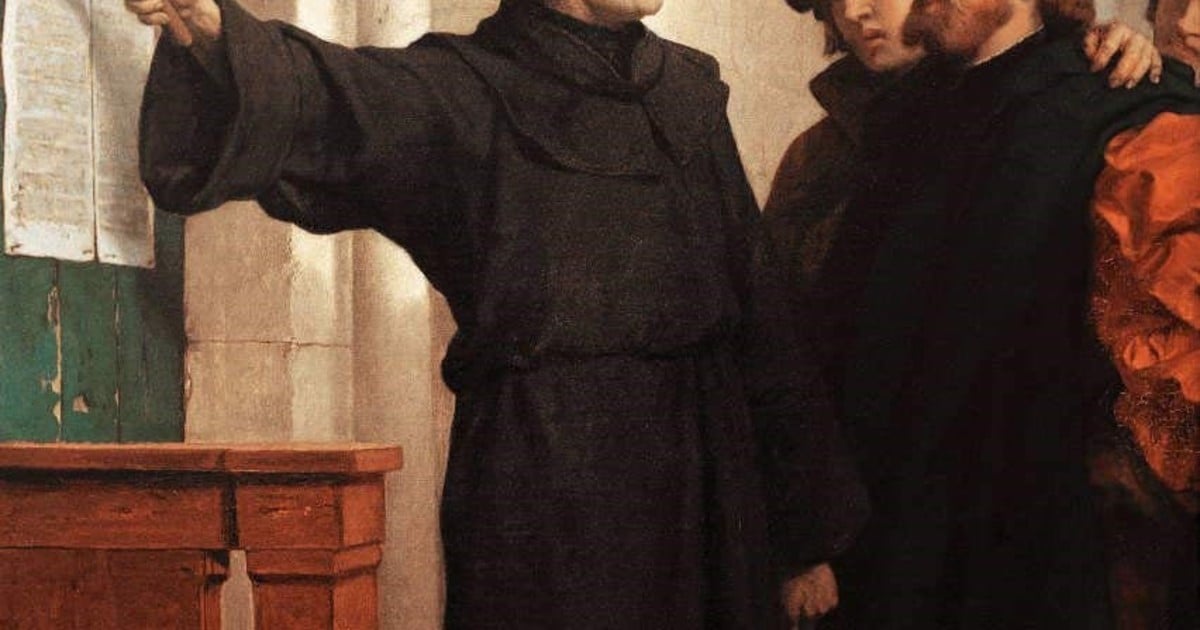 The Reformation is a central event in European history, which from the expansion of Europe over the world since the fifteenth century had and has a planetary impact. Today there are more than 800 million Protestants. And yet, when Martin Luther, an Augustinian monk and doctor of theology, preacher in the church of Santa Maria de Wittenberg (Saxony), nailed his famous 95 theses on the door of the church of the castle of the city, that October 31 of 1517, it did not pretend to create a movement that in a few years would break Latin Christianity in two and provoke armed conflicts on a European scale. His intention was to protest against the sale of indulgences (a plenary pardon for the sins of the living and the dead) made by the papal envoys seeking to finance the construction of the wonderful and very expensive Basilica of Saint Peter in Rome. From Luther’s perspective, this sale constituted a hoax, an abandonment of the pastoral mission of the Church, which was to educate believers in the Gospel and bring them closer to God.

Monument to Luther in Eisleben, the town where he lived for 35 years and where the house in which he died in 1546 is located.

But how did this protest by an unknown preacher in a medium-sized city of the Holy Roman Empire have such consequences? What was the context that led to this type of questioning of papal authority? And why did Luther not end up at the stake, but as the initiator of a movement that would be retaken by millions of people until today? Luther’s protest was not made in a vacuum, but as part of a climate that had been heating up for more than a century. A series of conflicts over the temporal sovereignty of the pope had led to the Great Western Schism in 1378, and until 1417 there were two (at one time three) popes. Requests for reform of the Church had traveled through the fifteenth century. The conciliarist movement resisted papal supremacy. Those who were considered heretics claimed that the Church lived in the poverty of Christ and abandoned earthly properties and powers.. Humanists like Erasmus of Rotterdam published treatises criticizing the clergy’s lack of training and the Church’s failure to lead souls to salvation.

By the 16th century, European society was going through a great economic expansion and the consolidation of kings and princes in larger-scale territories. These secular authorities also clashed with the Church, attempting to undermine its traditional jurisdictions and privileges. In the Holy Roman Empire, fragmented into principalities, duchies and kingdoms commanded by an elective emperor, various noble characters, and especially the Elector of Saxony, Frederick III, were encouraged to challenge the pope and the emperor in defense of Luther. In 1521 they refused to burn him to the stake when his confrontation with the papal envoys (a succession of writings, debates, requests for repentance, new writings, excommunication, and public commotion) culminated in the Diet of Worms.. There Luther appeared before the emperor and the ecclesiastical dignitaries, who demanded for the last time that he reject his books and the “errors” they contained. Legend has it that Luther refused to betray his conscience, saying “Hier stehe Ich. Ich kann nicht anders” (which translates very loosely as “This is my position. I can’t do anything else.”). The phrase, in all probability apocryphal, has a great weight in the Protestant tradition, where it embodies the primacy of the conscience of the believer in front of the powers of the world.

In Luther’s capacity to deal with the ecclesiastical hierarchy, the printing press also deserves a special mention. In the middle of the 15th century, Johannes Gutenberg had made the first print runs of his books. By 1517 Luther’s short texts circulated within a few weeks on a European scale. The reformer also headed an excellent propaganda machine that was refined over the years, producing something for every public: mocking images, political treatises, theological theses.

But What was Luther proposing that was so unacceptable to the Church? His theology started from a pessimistic concept of humanity, incapable of avoiding sin. No sacrament or good deed could compensate for the weakness of human beings, who did not deserve heaven. All they could do was trust the love of a God who had created them fallible and yet demonstrated his willingness to forgive them by sending Jesus to die for them. Passive faith in divine love, absolute surrender to God’s compassion, made human beings one with Christ, unjust by works, but just by faith.

A handwritten letter signed by Martin Luther in 1526 is displayed in the Museum of Christian Heritage in 2006. Photo: AP, Chris Gardner.

This idea had gigantic consequences. The human being faced God directly, without intermediaries, since no one else could judge whether or not his faith was sincere.. If only faith saved, then the sacraments that constituted the reason for the Church’s existence and its power in this world were useless. Nor did monastic orders where men and women pray for others and earn forgiveness for the community with their good works, nor pilgrimages, donations, nor institutions dedicated to praying for the dead, nor priestly celibacy. TLater eologists systematized Luther’s theology into a Latin list known as the Five Solas.: sola Fide (only through faith is salvation achieved), solus Christus (only Christ is the way to salvation), sola Gratia (only God’s Grace saves, not human actions or the ecclesiastical institution), sola Scriptura ( only the Scriptures can serve as a guide to the believer, not later writings, tinged with human sin), soli Dei Gloria (glory should only be for God, human actions – even those of the saints – should not be the object of worship, nor should your images be).

Luther retained only the sacraments instituted by Jesus in the Bible (baptism and eucharist). He established the obligation of every believer to read the Bible for himself to find God in it, and insisted that the Church as a temporal institution should submit to the authority of kings and princes, while the true Church (the community of all past, present, and future believers) was a spiritual reality. What’s more, He abandoned his celibate monk status to marry an exclaustrated nun, Catarina de Bora, with whom he had six children.

The delegitimization of the role of the Church as administrator of divine Grace gave rise to uprisings, revolutions and wars of religion that lasted for the next 150 years, while different sectors explored the political opportunities offered by the new situation. The unstable agreement that was reached, expressed in the formula Cuius Regius Eius Religio (according to which the peoples would follow the religion of their prince), fractured Latin Christianity into multiple parts, but did not lead directly to the general establishment of religious tolerance, far from the recognition of freedom of conscience as an individual right. It hardly implied the strategic recognition of the existence of multiple versions of Christianity endowed with political-military power.

Of many versions, because Protestantism was never (nor is) one. Luther supposed that studying the Bible would make all righteous believers agree with him in a single revelation. This did not happen. Other theologians made different interpretations and started separate churches. Protestantism then offers to this day an internal diversity that is not contained by a centralized authority, that neither exists nor could ever be accepted as superior to the conscience of the believer.

The International Monument of the Reformation, generally known as the Reformers’ Wall, is located in Geneva, Switzerland.

Also the Catholic Church changed under the influence of Luther. The need to fix the theology considered orthodox in the face of the Protestant controversy, and to build institutions that would educate the faithful in it (in addition to reinforcing the patrolling of consciences to prevent them from going to the other side) led the institution to do his own Reformation through the Council of Trent (1545-1563).

In the long term too It has been argued that the Reform had an important impact on other processes: the development of capitalism, the individual, secularization, among others.. The point is that, with the unanimity that prevented the discussion of sacred things broken, the States failed to limit the liberated consciences and imagination of Christians. This is true even for our country, which, contrary to popular belief, was never homogeneously Catholic. From the first years after the May Revolution, long before Argentina was a real political unit, already established Protestant communities questioned the idea that there was an automatic correspondence between the State and the Church. These first religious minorities have grown over time, and today it is estimated that around 15% of the national population (some have said 20%) is Protestant. Luther may seem far away, but the movement he started has a relevance that we would do well to acknowledge.

Paula Seiguer has a doctorate in History from the UBA, where she works as associate professor of General Social History at the Faculty of Philosophy and Letters. She is also visiting professor at the University of San Andrés, associate researcher at Conicet and author of I’ve never been home. The Anglican Church and the English in Argentina (2017), and Plural Experiences of the Sacred (2014) and Frontiers of the sacred (2020) the latter two together with Fabián Flores.