The United States opens vaccination against Corona to everyone 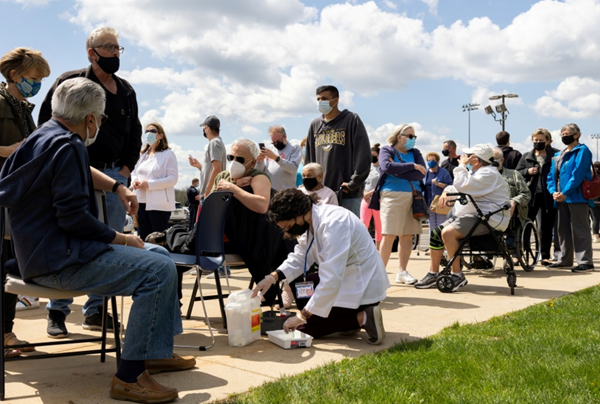 Starting today, Monday, all residents of the United States will be allowed to receive the Coronavirus vaccine, after it has vaccinated more than half of the adults in the country, at a time when several countries in Europe are preparing to ease health restrictions.
And the vaccination campaign in the United States continues very quickly, despite the suspension of the use of the Johnson & Johnson vaccine on Tuesday after the discovery of six cases of women who had dangerous blood clots, one of whom died.
About 50.4% of Americans over the age of 18 years were able to receive at least one dose of the vaccine, and 32.5% received the two doses, especially for adults over the age of 65, according to what was announced Sunday by the Federal Public Health Agency in the country.
In total, at least one dose has been given to more than 131.2 million people and the authorities intend to allow all citizens to receive the vaccine from Monday.
Suspending the use of the Johnson & Johnson vaccine will not affect the pace of the campaign, as it represents only a small fraction of the vaccines used. And US President Joe Biden said Tuesday that “there will be enough vaccines for every American. This matter is indisputable.”

Coronavirus When can the use of masks be abandoned? Experts estimate what is the most likely time for a “mask exit”

Kroos is back, but not Mendy