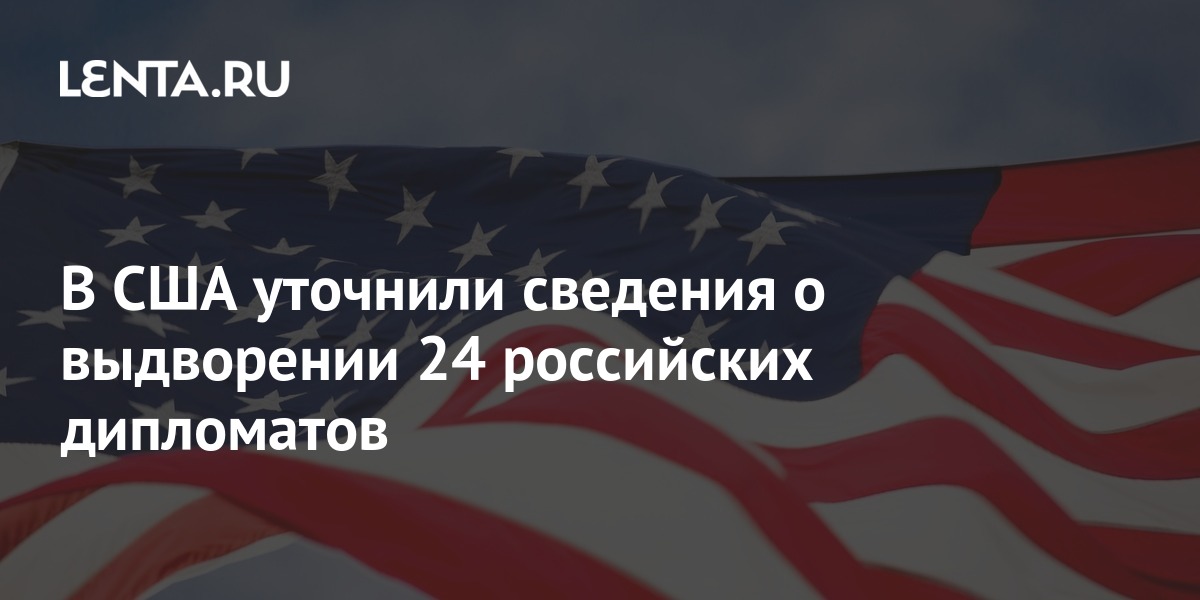 The United States clarified information about the expulsion of 24 Russian diplomats due to the fact that their visas expire. According to the head of the press service of the State Department, Ned Price, employees of the Russian embassy at the end of the three-year period of stay must leave the country or request an extension. His words lead TASS…

Let me, firstly, answer the statements of Ambassador Antonov in an interview, but his description of the situation is inaccurate, incorrect. The three-year visa validity limit is nothing new. When the visa expires, as expected, the persons concerned leave the country or request an extension

Photo: US Embassy in the Russian Federation

Price stressed that Washington is not interested in escalating diplomatic relations with Moscow. He also noted that restrictions on the duration of the business trip of employees of the Russian diplomatic mission to the United States are aimed at the balance of work.

Earlier it became known that from August 1, the United States will bring the composition of its diplomatic missions in accordance with the new requirements of the Russian government. In particular, Washington cannot hire Russians and third-country nationals to work at American embassies and consulates. Commenting on the current situation, US Ambassador to Russia John Sullivan noted that due to these measures, the number of diplomatic missions in the country will be reduced to 120 people.

US Secretary of State Anthony Blinken announced the reduction of the staff of diplomatic missions in Russia. He clarified that the American authorities were forced to lay off 182 workers. At the same time, Blinken noted that, despite the restrictions, Washington is focused on predictable and stable relations with Moscow.

Russian Ambassador to the United States Anatoly Antonov in an interview with the magazine National Interest reported that Washington gave Moscow in December 2020 a list of Russian diplomats who must leave the United States by September 3 due to a unilateral travel restriction of three years.

forced to leave Washington before September 3

According to the head of the diplomatic mission, the staff will leave the country without replacement, since the United States has tightened the procedure for issuing visas. He added that the deportation is carried out under far-fetched pretexts.

Unfortunately, the situation is not changing for the better. Russian diplomatic missions in the United States are operating under unprecedented restrictions that not only remain in effect, but are also increasing. Despite statements by the Biden administration about the important role of diplomacy and a willingness to develop stable and predictable relations with Russia, the Russian diplomatic presence is undergoing ongoing blows.

Antonov stressed that the American authorities are also canceling valid visas for the wives and children of diplomatic staff without giving any reasons. In his opinion, such a policy is aimed at squeezing Russian diplomats out of the country.

The ambassador added that Moscow showed restraint for a long time, but after the next sanctions it was forced to take measures, including a ban on hiring local personnel for the US embassies in Russia. He said that such a situation is not beneficial to anyone, parity solutions are required, one of such ways is the complete abolition of measures and countermeasures to restrict diplomatic activity.

Earlier, the Russian ambassador expressed confidence that Russian-American relations are “doomed to cooperation.” According to him, this is necessary to solve problems such as pandemic, terrorism and climate change. In such a situation, according to the diplomat, victory can only be achieved by joint efforts.