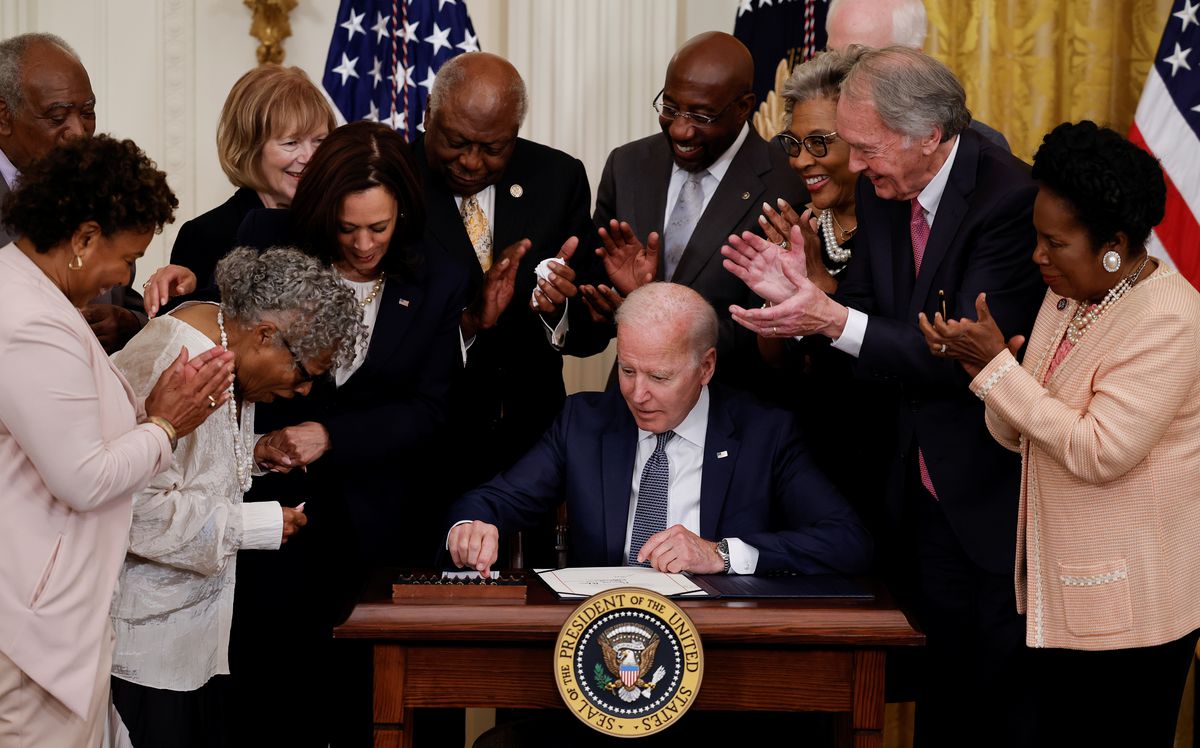 Joe Biden signed a law on Thursday that enshrines June 19 as a national holiday to commemorate the abolition of slavery in the United States. The new holiday is seen as a milestone in the recognition of the brutal history of discrimination suffered by African Americans, which, since the death of George Floyd and driven by the anti-racist movement, has been a leading issue in the national debate. The Senate approved the regulations unanimously and in the House of Representatives it had 415 votes in favor and 15 against – all Republicans. This is the twelfth national holiday on the American calendar. The last one added was Martin Luther King Jr. Day, in 1983.

The Juneteenth —Which in English mixes the word June with 19— is one of the oldest holidays in the United States. It is the date that the last African-American slaves in Galveston, Texas, learned they were free in 1865, two years after the Emancipation Proclamation signed by President Abraham Lincoln. It is “a day of profound weight and profound power,” said Biden, in which the United States remembers “the terrible price that slavery charged in the country and continues to charge.” As on other occasions, the US president affirmed that “the great nations do not ignore their past, they recognize it in order to heal.”

Although until now it was not recognized as a national holiday, the black community often gather that day in churches to remember their ancestors, pray for them, and then drink strawberry juice, which symbolizes spilled blood. Among those present at the ceremony to sign the bill at the White House, led by Biden and Vice President Kamala Harris, was Opal Lee, a 94-year-old African-American activist, who led the push to make June 19 a party national. Lee received a standing ovation from those present. “We are gathered here in a house built by enslaved people,” Harris said.

The idea of ​​making this date a federal holiday had been stuck in Congress for years. This Tuesday, Republican Senator Ron Johnson, who had been the only impediment to passing the bill, withdrew his objection. With a free pass, the Democrats presented the measure to the Senate through unanimous consent, which allows the bills to pass without debate or roll call. Once approved, it went to the House of Representatives where 14 Republicans voted against it, several of them representatives of States that were part of the Slavery Confederacy in the 19th century.

Texas Democratic Congresswoman Sheila Jackson said this week that she introduced the legilation “to commemorate the end of slavery, America’s original sin, and to carry out the celebration, crushing racial divide to a point of unity.” . Republican Matt Rosendale, one of those who voted against the law, said in a statement that the bill was an effort by the “extreme left” to “make Americans feel bad and convince them that our country is evil.” and “to enshrine the racial history of this country as the main aspect of our national history.”

Last year’s racial protests, the largest in half a century, gave new impetus to the crusade to make June 19 a day of national commemoration. Most states already recognized it as such, but only at the territorial level. Texas was the first to declare it a party in 1980. And it was there that, on June 19, 1865, two months after the end of the civil war, General Gordon Granger arrived with 2,000 Union Army soldiers on the island. of Galveston and issued the proclamation, “The people of Texas are informed,” he said, “that slaves are free.” 156 years later, the United States declares that day a federal holiday.