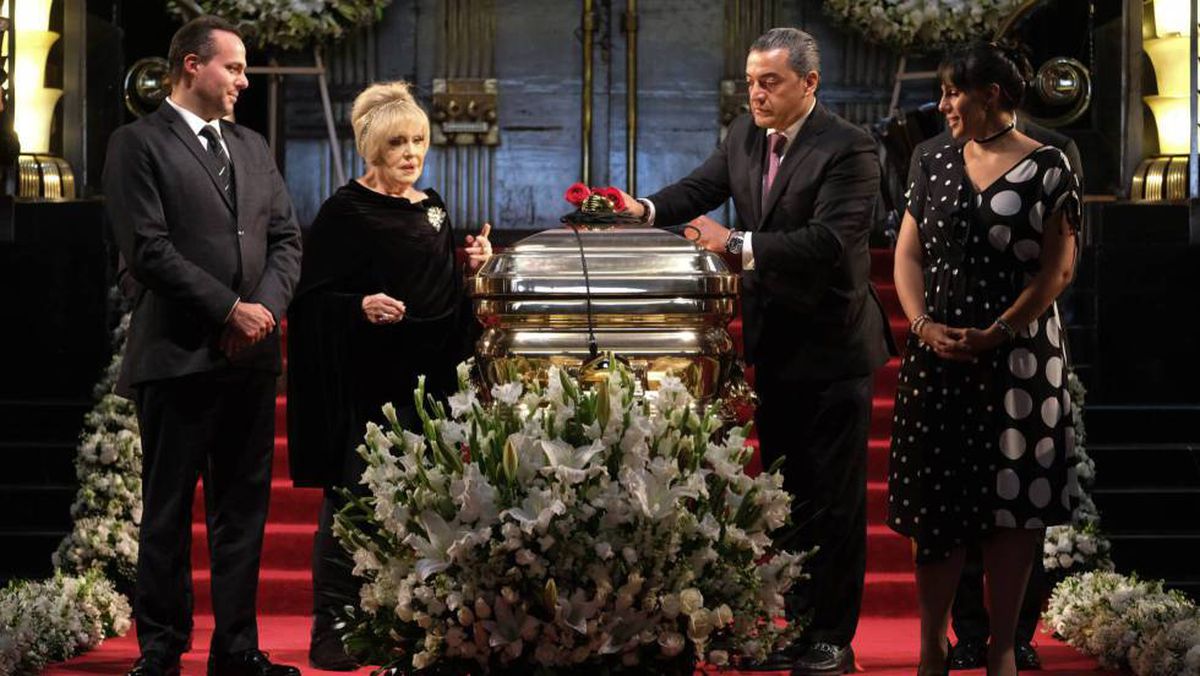 José Rómulo Sosa had a life full of ups and downs on a personal level, and his death does not seem to augur less. Since the death of José José, who was born in Mexico City in 1948 and died in September 2019, the last of his controversies has centered around the beneficiaries of his will. Although the Prince of Song He had not gone on stage for seven years and struggled with his addictions to alcohol and cocaine, he left a small fortune to distribute. This Monday, his second wife Ana Elena Noreña, known as Anel, has published on social networks that she is the beneficiary of the singer’s heritage despite the fact that José José spent his last years with Sara Salazar, his third wife, and the daughter he had with her. The children of their second nuptials confirmed at the doors of the Mexico City court where the will was read that Noreña is the favored one in the inheritance. “Today, legally and juridically, your word and your will were ruled. I am your universal heir to a legacy we build together. What happiness, what joy, what joy ”, Noreña wrote along with a photo of her with the singer in her youth. Sara Salazar and her daughter’s lawyer insists that the document is invalid.

To reaffirm the legitimacy of the singer’s last will, Noreña has used her Instagram profile as a showcase to remember her years with the artist and her wedding in 1976. The then television presenter, actress and model had known José José for six years before and started a relationship. They briefly separated for five years, the time that Rómulo Sosa’s marriage lasted with the granddaughter of former president Plutarco Elías Calles. When they returned, they soon celebrated their nuptials and had two children together: fellow singer José Joel and Marysol Estrella. They were the ones who communicated the resolution of the will in court. “We are very happy. The will was read in a legal and juridical way, where Mrs. Ana Elena Noreña Grass remains the universal heir ”, declared José Joel.

However, José José divorced Anel in 1991. He married for the third time four years later and spent the rest of his life in Miami with Sara Salazar, better known as Sarita, and the daughter he had with her, also called Sara. In 2017 he reported that he was in poor health due to pancreatic cancer. “They found me a problem in the pancreas, a tumor in the head of the organ, which is what has motivated me to be so skinny,” he explained. After two years of facing this disease after a life of alcohol and drug excesses, José José died in Florida at the age of 71. An entire country dressed in mourning and dismissed its idol in style at the temple of Mexican culture par excellence: the Palace of Fine Arts, where Octavio Paz and Juan Gabriel have also been fired. The mass was at the height of the exuberant celebration in the Basilica of Guadalupe.

The Salazars starred in the lawsuits after his death for the brief disappearance of the deceased’s body and the distribution of his ashes with his other family. José Joel and his sister claimed not to know how and where their father died or what happened to the body of the interpreter of Love ends, while he launched accusations and reproaches with his half sister. Family arguments kept an entire country in suspense for 10 days while the body was turned up, and as a result cremation had to be postponed until disputes over where the idol’s ashes would be scattered were resolved. Finally, the Consulate General of Mexico in Miami reported that the three children of the interpreter met to end the discussion and offer the Mexican singer a dignified farewell. A truce within the war caused between them by the death of the Prince of Song.

Almost three years later, tensions resume with the decree of the will. Willy Acevedo, the singer’s manager during the nineties, assured that the singer’s fortune was summed up in one and a half million dollars (almost 1.3 million euros) paid by Televisa for the production of a series about his life, the house in Miami where he lived and around 8% of the rights to his songs, a very small portion because he was not the author of any of his lyrics. In 2012, José José himself admitted that he fought every day with his health and with his voice, but that he could not afford to leave the stage. However, one of her closest friends claimed that the singer was not as broke as believed. “The last time I saw him he told me that he had four million dollars (almost 3.4 million euros). It was something that he counted on for his old age, ”Paulina Mondragón told the Mexican network TV Azteca.

Despite the fact that Anel’s family celebrates José José’s decision on social networks, the Salazar family maintains through their lawyers that the document is not valid in the United States, where the interpreter died and where he resided. “Anyone can say anything, that is not true, it is not accurate. It is a fact that it is not the law because he died in Florida. As a Florida resident, Florida law applies, not Mexico law, ”the attorneys for Sara and Sarita Salazar have insisted.