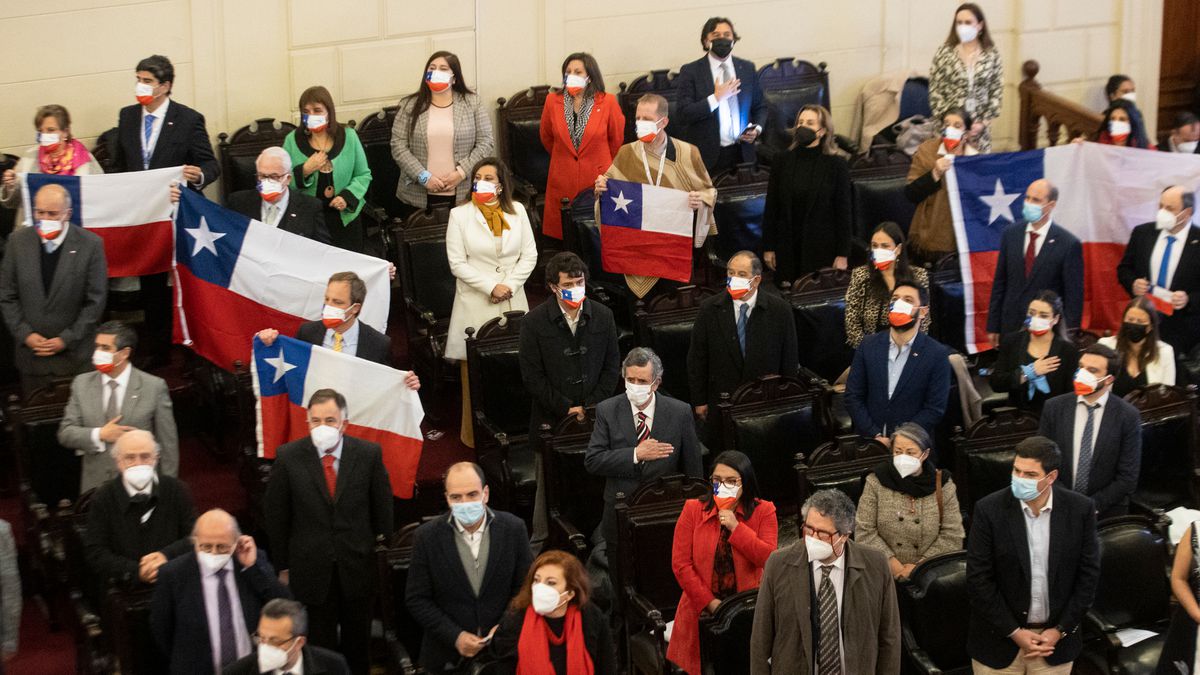 The ghosts of the chaotic start of the Chilean constitutional convention a year ago did not appear this Monday in the delivery of the proposal for the new Constitution to President Gabriel Boric. The first round of applause of the day went to the members of the Fundación de Orquestas Juveniles e Infantiles (FOJI), who in 2021 were interrupted at the opening ceremony because a group of constituents claimed that the police were repressing the protesters. The tense climate of that day was completely contrasted with the solemn closing ceremony this morning and with the festive atmosphere in the street.

The event started half an hour late and without the presence of Boric. When the president entered the hall of honor 40 minutes later, and began to advance towards the podium, the former conventional Ruth Hurtado, of the right-wing conglomerate Chile Vamos, approached him and handed him a T-shirt with the insignia “no more violence” and two passages to La Araucanía, the region affected by the conflict between the Chilean State and the Mapuche people over ancestral lands. The Chilean president has not visited the area since he arrived in La Moneda last March. Boric received the “gift” and passed it to his escort.

See also  Since February 17, 74 civilians have been killed in the LPR as a result of the actions of the Armed Forces of Ukraine

While in the former National Congress they sang the national anthem -it was sung at the beginning and at the end-, outside the building, in the midst of a large police deployment, other types of songs were heard. “We are not all here, the prisoners are missing!” Some cried out, alluding to the detainees of the 2019 social uprisings. The feminists, waving flags of approval in the referendum, shouted: “Health, housing, work and education. This September 4th we approved the new Constitution”.

In the act, copies of the constitutional proposal were distributed to the main authorities, to those who until today served as conventioneers, and to their guests. At the end of the ceremony, the clusters and teams that worked for a long year took photos together with the text and passed them to each other to be signed, evoking the images of a last day of school.

Despite the Republican atmosphere, the divisions among the constituents were evident. The 37 representatives of the right – out of a total of 154 – lamented having “lost the opportunity” to draft a fundamental Charter that would be “everyone’s home”. They made it clear that they are going to reject the proposal of the organization that, they accuse, excluded them. The bulk of the convention, mostly aligned with the ideas of the left, defended that the right “excluded itself” and called for the approval of the text on September 4.

With the polls giving advantage to the option of rejection, many made mea culpas and tried to bury the controversies -such as the resignation of a conventional for inventing cancer or changes at the last minute- to promote the text that, according to them, leads Chile towards the social changes you need.

The former conventional Manuela Royo was one of the first to leave the venue onto the street with her copy in hand. A dozen women approached her to applaud her, thank her, and asked for her book to photograph it. “We did it!” Celebrated Cecilia Oñate, 54, as she read Article 4: “People are born and remain free, interdependent, and equal in dignity and rights.” Under confetti and with live music, the atmosphere was one of celebration, although the demonstrators did not reach half a thousand.

“Today is a nice day to bury the Pinochet Constitution”, “We want a sixth retreat [de los fondos de pensiones]”, “No more AFP [sistema privado de pensiones]” read some of the banners of those who came to the Plaza de Armas, a few streets from the closing ceremony, in the center of the capital. Luis Sepúlveda, 26, approached the place with the latest version of the constitutional draft. He had it underlined and annotated. “I have dedicated myself to studying it. This is a historic moment and I think we should all take it seriously,” said the young man, who will vote along with more than 15 million Chileans on the constitutional destiny of the South American country.

subscribe here to the newsletter of EL PAÍS América and receive all the key information on current affairs in the region.