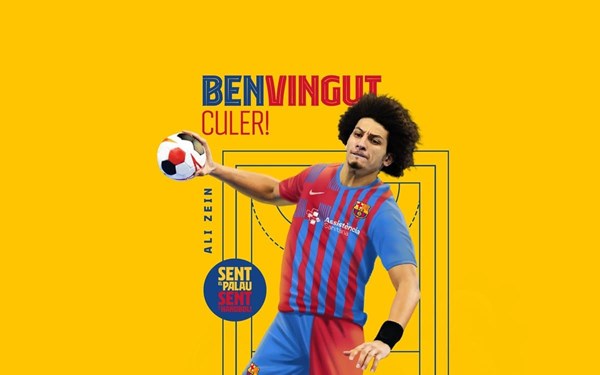 Ali Zain, the Egyptian national team player and the Sharjah handball player, entered history, after he became the first Egyptian player to play in Barcelona, ​​the European champion, and the third Arab player to represent the Catalan team in handball after the Tunisians Wael Gallouz and Walid bin Omar, the current coach of Al Jazira, after the Sharjah Club management agreed to transfer player.

Ali Zain begins his mission with the European champion last season after the end of his participation with Egypt in the Tokyo Olympics, where Zain is currently in the Egyptian team camp in France in preparation for the Olympics.

The Emirates was a turning point in Zain’s career, as he previously played with Al Jazeera and from there he moved to the French team Axe Provence, then contracted with Sharjah and was his gateway to return to Europe through Barcelona. Zain, 30, started his career with the Egyptian Al-Ahly club, and previously played for the Tunisian club Etoile du Sahel.

The Egyptian Ali Zain, player of the Barcelona handball team, thanked the management of his former club, Sharjah, and the fans of the “King” Al-Sharqawi after his departure. Zain posted tweets on his account on the social networking site “Twitter” after signing with the Catalan club, and said: I bid farewell to Sharjah Club and I would like to thank The club management, the technical and administrative staff and all my teammates to help me become a better handball player and to the club’s fans who supported me a lot during my career with the team.

He added: During the period of my contract with Sharjah, I and my family felt that I was at home, which prompted me to give everything I had to the team, and I wish success to my colleagues in the team and the technical staff led by Hani Al-Fakhrani, the hardworking and ambitious in what is to come, and also thanks to the medical staff in the club, which provides a service on the highest level.

He continued: The club’s board of directors headed by Ali Salem Al Midfa does a lot for the club’s handball system, and I thank them, as well as Muhammad Al-Hussan, head of the club’s collective games department, who supported me a lot, Jassim Muhammad, the team supervisor, Ali Al-Marzouqi, team manager, and Naji Rabea, the former supervisor of handball in the club. I wish success in the future.

According to Egyptian press reports, Sharjah agreed to Barcelona’s offer to contract with Ali Zain in return for paying the penalty clause in his contract, which amounts to 500 thousand dollars.