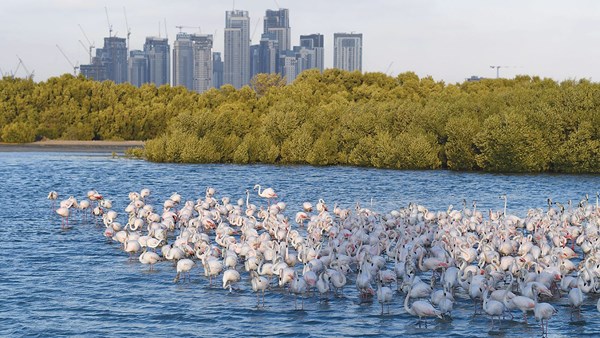 Today, the UAE participates with the world in the celebration of the World Day to Combat Desertification and Drought 2021, under the slogan “Reclamation, land, recovery.. healthy land to rebuild better.” It falls on June 17 of each year, and the participation of the UAE comes with the international community on this occasion, Emphasizing the renewal of the determination to make more efforts to confront desertification, whose repercussions may worsen, given the threats posed by the pandemic of the emerging Corona Virus (Covid-19) in particular and climate change in general, not only at the level of the Emirates, but on the countries of the world as a whole, and the subsequent consequences brief for mankind. The UAE’s serious participation and interest in this international day also comes as a unique moment to remind the international community of the possibility of halting land degradation first, and to enhance public awareness about international efforts to combat desertification by reducing the risks caused by these issues, and secondly, in order to preserve humankind and its future on this planet. and its sustainability. The UAE’s participation in the Secretariat of the United Nations Convention to Combat Desertification, which leads the celebration of this International Day, bears several indications that the country has a record and a rich history of efforts to protect lands from deterioration and desertification, which over the years have constituted an important pillar in its approach to protecting the environment, preserving its natural resources and biological diversity, and ensuring Its sustainability, which enabled it to deserve the participation of the international community in this celebration in its new session aimed at emphasizing the reclamation of lands and transforming them into sound lands, achieving five goals represented in slowing the pace of climate change, highlighting the importance of efforts to renew the fertility of arid lands and raising awareness of the importance of diversity Biological that contributes to climate recovery through the absorption of carbon whose sequestration leads to global warming, and the promotion of land restoration, which contributes to adding economic resilience, creating jobs, raising incomes, increasing food security and clarifying the current commitments made by more than 100 countries to restore nearly billion hectares of land over the next decade.

national commitment
The Emirati participation in the new session of this celebration also bears several indicators that confirm the national and moral commitment to achieving a balance between protecting land from deterioration and ensuring the sustainability of its natural resources and biodiversity to the extent that achieves development on various economic and social levels, preserves its balance and guarantees to future generations their rights. A major approach on which the state has been based since its establishment in the early seventies of the last century.
new stage
With the end of its strategy to combat desertification during the current year, the UAE is preparing itself for a new phase based on the march of the unique achievements in this field that have been achieved during the past five decades – and it will not stop there, but rather seeks to intensify its efforts to curb and neutralize desertification by launching Several new initiatives and programs in this regard – as it approved an integrated legislative system that guarantees the protection and reclamation of lands, and launched many national programmes, initiatives and strategies, and is determined today to continue to keep pace with the best future requirements for current and future generations by enhancing the quality of life on its land, with a focus On a sustainable environment that supports long-term economic growth, and in a way that supports efforts to achieve the 2030 Sustainable Development Goals, in addition to moving at an accelerated pace to achieve Goal No. 15 of the United Nations Sustainable Development Goals, which is to ensure (life on Earth), which focuses on restoring land and preserving Biodiversity.

Nature’s Challenge
Despite what some countries suffer from land degradation and desertification, especially those located in arid, semi-arid, dry and semi-humid areas, the UAE, as it includes part of the Empty Quarter and nearly 80% of its area is desert, has challenged this nature and made The desert is an attractive habitat for many organisms and crops through achieving many unique achievements such as rehabilitating ecosystems and neutralizing land degradation, employing artificial intelligence such as drones in land surveying, planting local trees and major crops such as rice, greening the land and spreading gardens and green spaces on a large scale Increasing the number of natural reserves and accessing them during the past year to about 49 reserves at the state level, representing 15.5% of the total area of ​​the country, in addition to the increasing number of palm trees, forest and fruit trees, the establishment of dams that contribute to providing irrigation water for agricultural lands, and the establishment of research centers And experiment stations concerned with research and development activities in the field of combating desertification, monitoring climate changes, and many others.

deterioration neutralization
With these achievements and while the countries of the world are trying to combat the desertification of their lands, the UAE has been able to successfully transform parts of its desert lands into green spaces despite the many difficulties represented in its essence by climatic conditions such as high temperatures, high levels of humidity, low rates of precipitation and others, and the best proof of that is its success Thanks to the efforts and initiatives since its inception in line with the definition of neutralization (land degradation neutrality) in the United Nations Convention to Combat Desertification, which describes neutralization as: “A state in which the quantity and quality of land resources needed to support ecosystem functions and services and enhance food security are stable. or increase over time and spatial scales within specific ecosystems.”

Desert Knight
Since its establishment, the UAE has lived an agricultural and environmental renaissance, which has resulted in an increase in the vegetation cover, including planted forests, farms, gardens, and millions of trees and plants that spread among the desert lands. It bears witness to the effort and the greatness of achievement that has been achieved thanks to the concern for the environment that was initiated by the late Sheikh Zayed bin Sultan Al Nahyan. May God rest his soul”, who was called “Desert Knight”, and thanks to his wise policy, large areas of arid desert were transformed into forests and green spaces spread in the midst of the deserts. These achievements are the actual translation of restoring degraded lands and combating desertification, in addition to transforming arid lands into fertile according to the Emirati style, That is, transforming areas of arid desert into green spots. Under the United Nations Convention to Combat Desertification, the adopted definition of desertification is “the deterioration of land in arid, semi-arid, dry and semi-humid areas as a result of various factors, including climatic differences and human activities”, while in the UAE we have done what is more than that.

Initiatives and plans
The state has adopted many initiatives and plans to combat desertification, including applying sustainable land management techniques, diversifying production, rehabilitating degraded lands and reducing erosion, implementing projects to protect natural vegetation cover around population centers and buildings, and establishing green belts around cities and economic facilities and on roadsides, with Making use of treated wastewater in irrigation, implementing programs that encourage efficient use of water, rationalizing its use in the cultivation of crops with low water needs and resistance to drought and salinity, and developing plans to generalize the application of modern irrigation methods and organizing irrigation to reduce evaporation processes, and promoting the use of treated wastewater In irrigation of gardens and some industrial fields.

Corona challenge
According to the UAE’s participation in this global occasion under the slogan “Reclamation, land, recovery… a sound land to rebuild better”, it carries other meanings that include the state’s superior success in dealing with and challenging the emerging corona virus (Covid-19) pandemic, and the ability to achieve balance. What is desired is between growth and preserving land from deterioration, in order to ensure a clean and safe green environment and contribute to providing prosperity, well-being, health, stability and happiness for current and future generations, and in confirmation of its leading role in addressing the problem of desertification, which was translated on the ground by practical policies and procedures that contributed during the past decades to cordoning off the effects of those problem, and reduce its harmful environmental repercussions.

legislative frameworks
The state has worked to strengthen legislative frameworks and develop plans and programs to address soil erosion, salinization, groundwater depletion, high salinity, sand encroachment, land use change, overgrazing and agricultural intensification. It issued an important set of legislation such as the Environmental Protection and Development Law, the Agricultural Quarantine Law, and the Cabinet Resolution on Community agriculture, the cultivation of local plants, nature conservation, the law on organic inputs and products, the law regulating the production, import and circulation of fertilizers and agricultural improvers, the law on new plant varieties, and the law on plant genetic resources for food and agriculture.