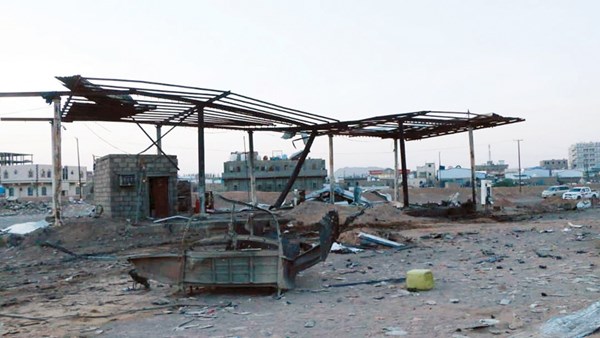 The UAE strongly condemned the Iranian-backed terrorist militia’s targeting of a fuel station in the Yemeni province of Ma’rib with a missile and a booby-trapped plane, which resulted in a number of deaths and injuries to innocent civilians, including children. In a statement, the Ministry of Foreign Affairs and International Cooperation confirmed that the UAE expresses its strong condemnation of these criminal acts that aim to destabilize security and stability, and are inconsistent with moral and humanitarian values ​​and principles.
The ministry urged the international community to take an immediate and decisive position to stop these repeated actions targeting vital and civilian facilities in Marib, stressing that the continuation of these attacks on the city of Marib, which hosts a large number of displaced and civilians fleeing from areas under the control of militias, exacerbates the humanitarian situation in Yemen.
The ministry also urged the international community to unite efforts and take a decisive stance to stop the crimes committed by the terrorist Houthi militia, to pave the way for a comprehensive ceasefire in Yemen, and a return to a political process that leads to peace, security and stability in Yemen. The Ministry also expressed its sincere condolences to the families of the victims of this heinous crime and wished a speedy recovery to all the injured.
The terrorist Houthi militia had targeted a gas station in the “Al-Rawda” neighborhood, north of the city of Ma’rib, while dozens of cars were waiting in front of the station waiting for gasoline, killing 21 civilians, injuring others, and burning 7 cars and two ambulances that rushed to help the victims after being targeted by a booby-trapped plane launched by the militia minutes after Rocket launch.
Meanwhile, Rights Radar Human Rights Organization called on the United Nations to adopt an independent international investigation to assess the continuing risks as a result of the continued targeting of civilians by the Iranian-backed terrorist Houthi militia.
In a statement carried by the official Yemeni news agency “Saba”, the organization condemned the horrific massacre committed by the Houthi militia against civilians in the city of Ma’rib.
The organization pointed out that this crime coincides with the efforts of the international community at all levels for a ceasefire in Yemen, which confirms the intransigence of the terrorist Houthi militia towards these efforts, and a clear obstruction to the peace process in Yemen.
It called on the international community to carry out its moral and legal duty to put an end to the targeting of civilians in the governorates of Marib, Hodeidah and Taiz, most of which amount to war crimes that require punishment for their perpetrators and those behind them.