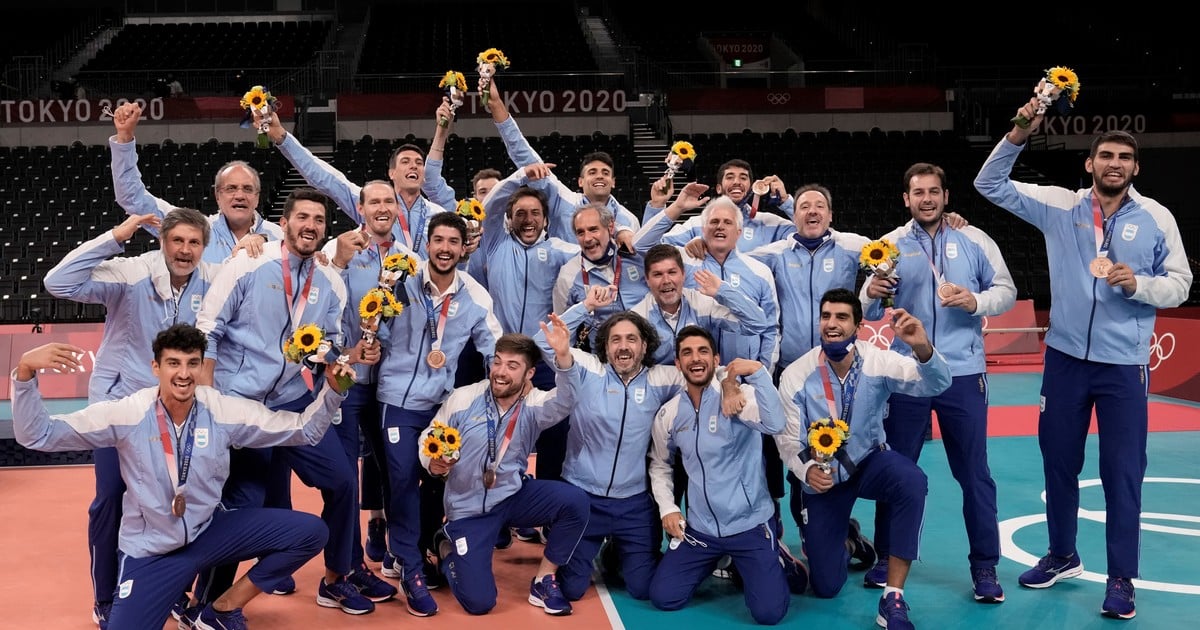 Thirty-three .. That number was reached by the number of years that passed from that Brazilian cross shot that went wide to this effective Argentine blockade. Almost an “eternity” passed between what those Seoul kids did to what these other Tokyo kids just did. And in the middle, two Olympic bronze medals for Argentine volleyball to make a strong footing again in a great international competition. As in the 1982 World Cup, as in those 1988 or 2000 Games. Time will tell what the scope of this new podium is …

Bronze brought with it another three medals. Or, better, three recognitions.

The first is for the players and the technical staff. And that leads to a technical analysis on its own. Argentina today has three top players, who are among the best in the world. They are Facundo Conte, Sebastián Sole and Luciano de Cecco.

The selected team had to find at least one more piece to accompany the trio because, for many moments, the team was “short”, with no variants. Marcelo Méndez hit the key with Santiago Danani, a libero who played a phenomenal tournament, of a very high level and who is on the way to becoming the new Jenia Grebennikov, the Frenchman who is the best in the world in his position.

Then Bruno Lima and Ezequiel Palacios appeared and, already in the decisive match against the Brazilians, Agustín Loser. The first two gave a break to the Argentine attack output that was summarized to what Conte and Solé could do. When sooner or later they found both, there were no variants.

Between the two they added 39 percent of Argentina’s points in Tokyo 2020 (Lima was the top scorer with 138), thus filling a key deficit and the team had a better performance than it had been offering.

The second point passed was that of the mental aspect. The National Team could not keep up with the rhythm of the game during an entire match against a powerhouse. They lost three points in a row and then six and then a set and then came the logical defeat. In the Games, when Argentina was two points down in a quarter, they turned and when they were two points up and they were tied, they also returned. And the same thing happened after a lost set. It always came back, came back and came back.

It should also be noted that Argentina, after losing in the first two matches to Russia and Brazil (with all that that defeat against the Brazilians meant with a match that was controlled from the result), had to play six “finals. “Back-to-back against France, Tunisia, the United States, Italy, France again in the semifinals and, of course, again Brazil for third place. All those exams gave the campus an extra quality leap.

Finally, it is worth the bet on a decision to risk more in the serve and the attack. In modern volleyball, this effectiveness in both areas determines a final result. And Argentina improved their numbers in both.

The Olympic bronze is also the merit of a process that began in 2009 when it was taken as a strategic plan to invest in the base teams. A) Yes, in the last 10 years the men’s youth teams remained in the top five of the rankings winning medals in World Cups and South America, where Brazil has already been beaten many times, for example.

That plan was maintained with a strong bet despite all the economic problems in Argentina of which volleyball, of course, was not, is not and will not be alien. And there, too, in that more than complicated context appears a League that had 16 teams at the end of the 90s, which later stabilized with between 10 and 12 protagonists and that in the last edition only had seven participants.

It is a League that must be strengthened and that needs to be more extensive so that it continues to bear fruit in a country that, already said hundreds of times, has serious structural drawbacks in its sport.

From that League, precisely, the vast majority of the bronze owners came out. Because except for Facundo Conte, who never played it since in Argentina he did it hand in hand with his father in Gymnastics and Fencing but in A2 (later Hugo Conte took his family to Italy and his son began an extraordinary career in that country ), the rest grew out of that unique hotbed that clubs continue to be. And from them all went to the world to conquer it.

A separate paragraph deserves the father of the child. Marcelo mendez, the most winning coach in the Brazilian Super League after 12 years at Cruzeiro (he competed in 55 tournaments, was a finalist in 48 and won 39, including three World Cups, seven South Americans and six Superleagues), he is also the product of a club. In your case, River.

And he himself, in his moment of greatest glory as a coach, did not forget “From the work of the grassroots and the clubs, which is very important to reach this type of instance; we have to promote in some way, to help the clubs so that they do not die. They are the base of these athletes”.

Méndez received the message from one of the heroes of Argentine sports: Julio Velasco. In an almost unprecedented event in our country, two coaches got together when the La Plata player decided to leave the team after the 2018 World Cup that ended with an opaque 14th place. And that is another example given by those who some called these days “guardians of passion”. They are none other than those who, in silence, always bet on that volleyball that the train, once again stopped at the station, is waiting to get on.