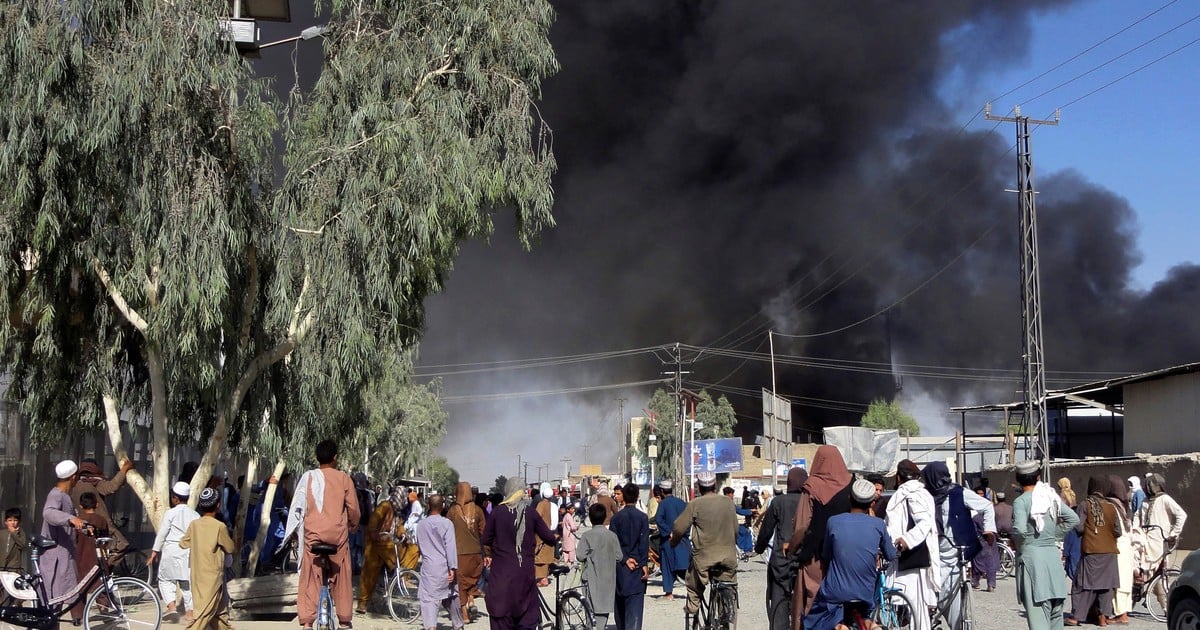 The Taliban rebels tightened their territorial siege on Kabul on Saturday, while those displaced by the relentless rebel offensive flooded the capital of Afghanistan, where US soldiers arrived to support emergency evacuations.

Amid the unstoppable and violent advance of the insurgents, the president of Afghanistan, Ashraf Ghani, pledged this Saturday to remobilize the armed forces, which were weak and battered in the face of the offensive in recent weeks.

“The remobilization of our security and defense forces is our number one priority and serious action has been taken in this regard,” Ghani declared in a televised address to the nation.

After the fall of several large cities to the Taliban, Kabul came under siege as the last defense of government positions, which elsewhere have collapsed in the face of the relentless insurgent advance.

The military situation is critical for the government. In just over a week, the Taliban seized control of most of the north, west and south of Afghanistan and reached the gates of Kabul, the capital.

The only cities of any importance that were captured by the Taliban are Jalalabad, Gardez and Khost, which they probably won’t offer much resistance either.

Rebel fighters are camped just 50 km away from the Afghan capital, forcing the United States and other countries to quickly evacuate their nationals in Kabul in fear of an all-out assault.

Passengers at Kabul International Airport this Saturday. Exodus from the capital of Afghanistan before the Taliban advance. Photo: AP

US embassy staff received orders from destroy sensitive material, while the soldiers began to arrive to guard the airport and monitor evacuations.

For this, the United States will deploy a total of 3,000 troops

Several European countries such as the United Kingdom, Germany, Denmark and Spain announced on Friday the withdrawal of staff from their respective embassies.

For the Kabul people and tens of thousands who sought refuge in the city, the atmosphere was one of confusion and fear for what is coming.

Muzhda, 35, a single woman who came to the capital with her two sisters after fleeing Parwan, claims to be terrified.

“I cry day and night,” he told the AFP agency. “I have given up several marriage proposals in the past. If the Taliban now come and force me to marry, I will commit suicide,” he says.

UN Secretary General Antonio Guterres said he was “deeply concerned” about the treatment of women in areas controlled by the Taliban, who ruled Afghanistan between 1996 and 2001 and imposed a radical version of Islam.

“It is particularly shocking and heartbreaking to see reports of how hard-won rights by girls and women are being taken away,” Guterres added.

Afghan policemen search the trunk of a car during an operation on the entrance route to Kabul. Photo: AFP

The magnitude and speed of the Taliban advance spooked the Afghans and the international alliance, which invested billions of dollars in the country after deposing the Taliban after the September 11, 2001 attacks in the United States.

Shortly before completing the US withdrawal ordered by US President Joe Biden, scheduled for late August, Afghan forces have gradually surrendered, giving the insurgents more vehicles and military equipment to fuel their advance.

Despite frenzied evacuation efforts, the Biden government insists a total Taliban victory can be avoided.

“Kabul at this time does not face an imminent threat,” Pentagon spokesman John Kirby said Friday, although he admitted that the rebels “are trying to isolate” the city.

The Taliban offensive has accelerated in recent days with the taking of cities such as Herat in the north and Kandahar, the group’s spiritual center in the south.

The building of the US embassy in Kabul (center), this Saturday. Photo: AP

Abdul Nafi, a resident of Kandahar, told AFP that the city was quiet after the departure of government forces, which were installed in nearby military bases while they negotiated their surrender.

“I went out this morning, I saw white flags of the Taliban in most of the squares of the city,” Nafi said.

The weapons of the rebels

In Herat, the Taliban captured the historic anti-Taliban fighter Ismail Khan, who helped guard the city alongside his militants.

Pul-i-Alam, the provincial capital of Loghar, was the last city to fall on Friday, an advance that left the Taliban at the gates of Kabul.

Helicopters went back and forth between Kabul airport and the area where it is the American embassy in the sheltered Green Zone, which was reminiscent of the American evacuation of Saigon 46 years ago, marking the end of the Vietnam War.

US evacuation will include thousands of people, between embassy staff and Afghans and their families who fear retaliation for working for Americans.

Kirby said that most of the troops in charge of the evacuation would be installed by Sunday and that “they will be able to remove thousands of people a day” from Afghanistan.