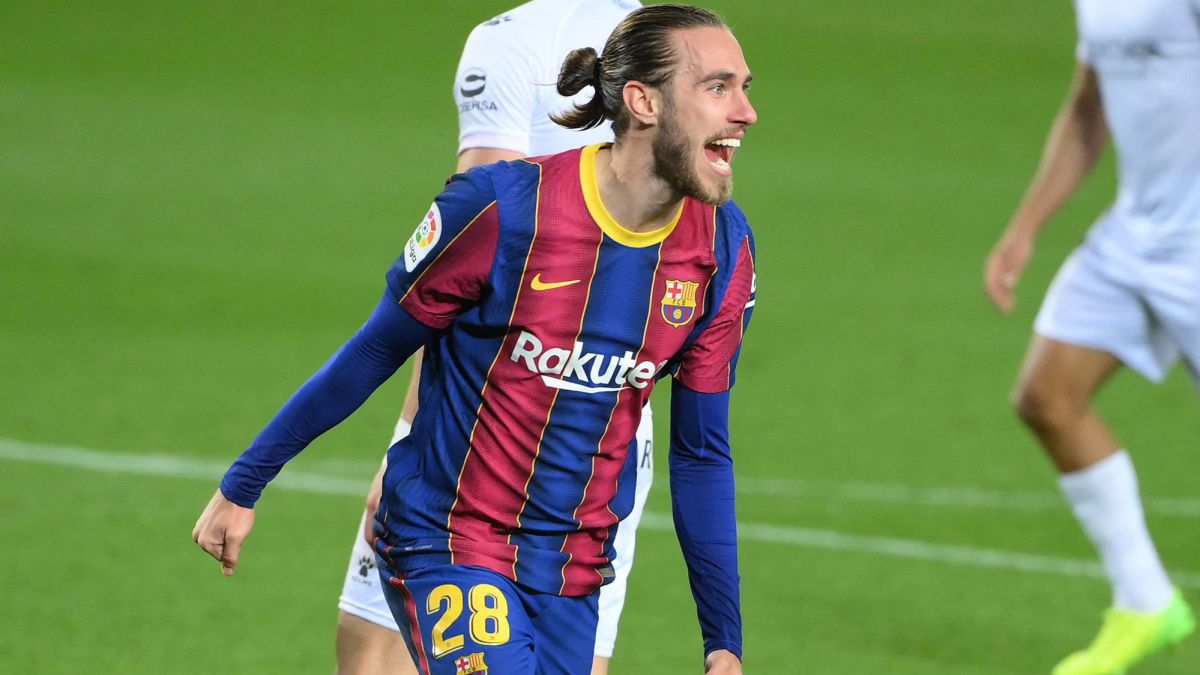 Óscar Mingueza’s flight to score his first goal with the Barça first team shirt has something symbolic. “Every game continues to grow,” praised none other than Carles Puyol, a legend. It was the final takeoff flight for this boy from Santa Perpetua (5/13/1999) who has made a hole in the Barça first team without anyone having given him anything. Mingueza debuted on November 24 in Kiev as a Barça player. That was only four months, but he seems like a regular on the first team that has been in the longest. And that’s because he has played a lot. Nothing less than 29 games. Koeman has found in him a mature player, who knows his limitations and who does what is asked of him at all times. With few exceptions (his own goal in Cádiz, the penalty against Ocampos in the Cup or the bad half hour that Mbappé gave him in Paris), he has played with trade. He recognized himself a few months ago, in an interview during confinement, as a “more done” player.

With a contract until 2021, but with an option to extend it until 2023 by the club, Mingueza has already been summoned by Luis de la Fuente and will play the European Championship, another big news to celebrate because he had not yet played with the Under-21 National Team. Winner of the Youth League in 2018 with the generation of Riqui Puig, Jandro, Miranda or Carles Pérez himself, for a moment it seemed that Mingueza could not climb the last step. Last season, García Pimienta, who has followed in his footsteps (Mingueza has been at Barça for 14 years, entered as a youngest and has played in all categories), opted for Ronald Araújo and Cuencia in the center of defense. But the departure of Jorge Cuenca to Villarreal (who yielded him to Almería) opened another door that became bigger when Piqué, his great mirror these years, was seriously injured. With Umtiti physically ill, and in the absence of centrals, Mingueza, lover of rappers’ cockfights, grabbed the opportunity of his life. And he has already played 29 games.

In love with Ronaldinho and Deco in his childhood, he remembers going to the Camp Nou when he was just nine years old to see a Barça-Lyon in the Champions League. Then he was already a boy from the ‘planter’. At La Masia they have taught him to “be humble, study and not go too far”. He began to attend INEF, although for now elite football has taken away the time to progress properly. A detail that speaks of the character of Mingueza, now that he dreams that becoming a new Puyol, big words, has to do with what he considers his true reference in football. “My cousin, who played at Santa Perpetua. I played with 20 because I wanted to be like him. I always went to see him and wanted to play like him.” You can see that soccer is a family affair for the Minguezas. Ariadna, Óscar’s sister, has already made her debut with the Barça first team when she was only 17 years old. Happy days for the Minguezas.

The United Nations appoints a new envoy to Afghanistan

Biologist dispels the myth of spiders swallowed in a dream

Space Jam: A New Legacy – The first trailer is full of furros, Pennywise and even King Kong | EarthGamer