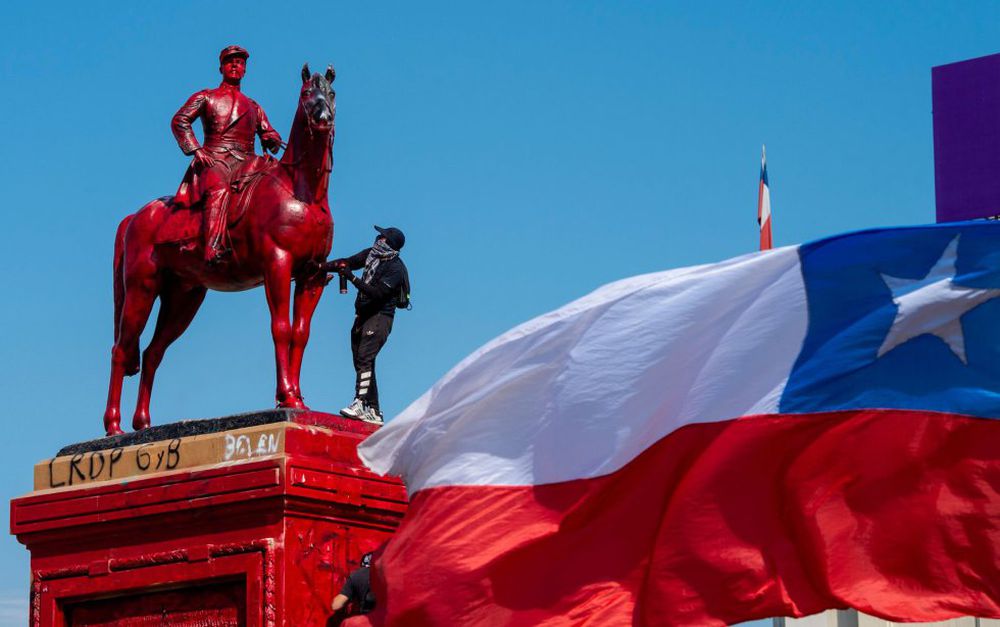 At the hours of the first anniversary of the social outbreak on October 18, 2019, in Santiago de Chile a symbolic dispute has taken place at the monument to General Manuel Baquedano, at the epicenter of the protests in the capital, the Plaza Italia area. On Friday afternoon, the day of the week when the mobilization was reactivated, a group of hooded protesters dyed the sculpture red in honor of the 19th century soldier. Hours later, the Chilean Army through a statement rejected “the vandalization” of the work, which this Saturday dawned repaired again: both the sculpture and its pedestal were painted by the mayor.

“The Chilean Army regrets and rejects the vandalization of which the figure of General Baquedano, who was a hero and a relevant actor in the definition of the territorial limits that Chile currently has, has once again been the object,” said the military institution on the sculpture by the Chilean artist Virginio Arias (1855-1941). “It is surprising and incomprehensible that the monument that the State of Chile itself erected in recognition of his exemplary military career and personal life dedicated to the Homeland and its memory, is violated by the attitude of some people who turn their resentment and frustration on symbols that represent each of the Chileans, ”the Army said last night.

Since the social outbreak of October 2019, the sculptures have become a symbol of the Chilean social outbreak. The works of streets, avenues and squares have been transformed into a large blackboard of proclamations and the most dissimilar social demands. The works practically disappear behind dozens of scratches, spray painted or adhered elements. Some have been torn off and others deformed. What has happened to monuments and public art has opened a deep debate in Chilean society. It depends on who looks at it, it is pointed out that the sculptures have been intervened, damaged or directly vandalized.

The monument to General Baquedano has been one of the works that has been affected the most, due to its location at the epicenter of protests and, for decades, the epicenter of all kinds of celebrations, including sporting triumphs. Made of bronze and green stone base, in the peak weeks of the mobilizations it was partially operated by experts to avoid fractures in some areas of the piece. When the pandemic exploded in March and the protests suddenly stopped, however, regional authorities repaired it with layers of paint.

“In fact, it was not restored: a cleaning intervention was carried out. The green stone plinth and the sculpture were covered with a layer of paint, but technically speaking it is not a restoration ”, explains Fernando Pérez Oyarzún, director of the National Museum of Fine Arts, about the state of the sculpture before it was painted yesterday in red for the protesters. “It was not in its original state either,” explains the architect.

For Pérez, “monuments embody feelings and symbols and, therefore, as they are visible, part of society is manifested in them when social tensions occur, as we have seen before in Chile and is happening in other parts of the world.” According to the director of the National Museum of Fine Arts, “it does not mean that those who intervene or react to the monuments know in detail who it represents or why it was erected.” “It is not an artistic intervention, but a social reaction that is expressed in public space.”

Few people from Santiago know that, under the monument to Baquedano, there are the remains of an unknown soldier who participated in the War of the Pacific at the end of the 19th century and who symbolizes the people, who had to go out to fight. When the demonstrations began a year ago, both the water fountain and the bronze figure of the soldier were destroyed and the municipality removed the remains.

The Municipality of Santiago some time ago hired a company to clean public spaces painted and scratched by protesters.

The Army in its statement asked the Council of National Monuments “to exhaust the measures” so that higher standards of security are provided to the monument. In the event that this cannot be guaranteed, the Army requested that a public place be transferred to another, near the central Bicentennial Army building, “so that it remains under the protection and safekeeping of the Army.” “The vast majority of Chileans value and respect the heritage of our ancestors and want to progress and develop in peace. Due to the path of violence and vandalism, the country will not achieve its aspirations for progress, ”the Army concluded.

The Council of National Monuments today at noon ruled on the matter: “The situation of national monuments that have been affected after October 18, 2019 is serious, since they are heritage assets that are part of our history, legacy and memory, and that we must protect for future generations ”. The body dependent on the Ministry of Cultures indicated that the Army’s request to transfer the monument to General Baquedano to the military institution’s premises will be analyzed.

The University of Chile academic and Doctor of Sculpture, Luis Montes Rojas, explains that “from the beginning of the social mobilization the monument was once again understood in its political dimension and the protest used it as an amplifier of demand.” “In particular, the monument to Baquedano, which could be understood as the main scenery of the revolt and territory in permanent dispute,” says the sculptor, who aims to raise a debate with high-mindedness on the matter: “What we see today it is a monument turned into a sign subjected to successive interventions, to changes, in transit. And for the same reason, perhaps we should understand it from that perspective, without fear of raising a discussion about its conservation and its future, which might not be there as the Army has proposed ”.

According to Montes, “if in Chile the monuments have been moved on innumerable occasions without consultations and by mere ornamental decision, today we have the duty to raise a discussion with high sights, which may include experts and the community, in accordance with the complexity of the nature of public monuments, which requires a multidimensional view that allows the construction of an analytical perspective and a collective vision of them ”.

Football Marcus Forss has played a strong fall, but the place has not yet opened since the Owls’ attack: “Of course the call is waiting, but its time has not yet been” 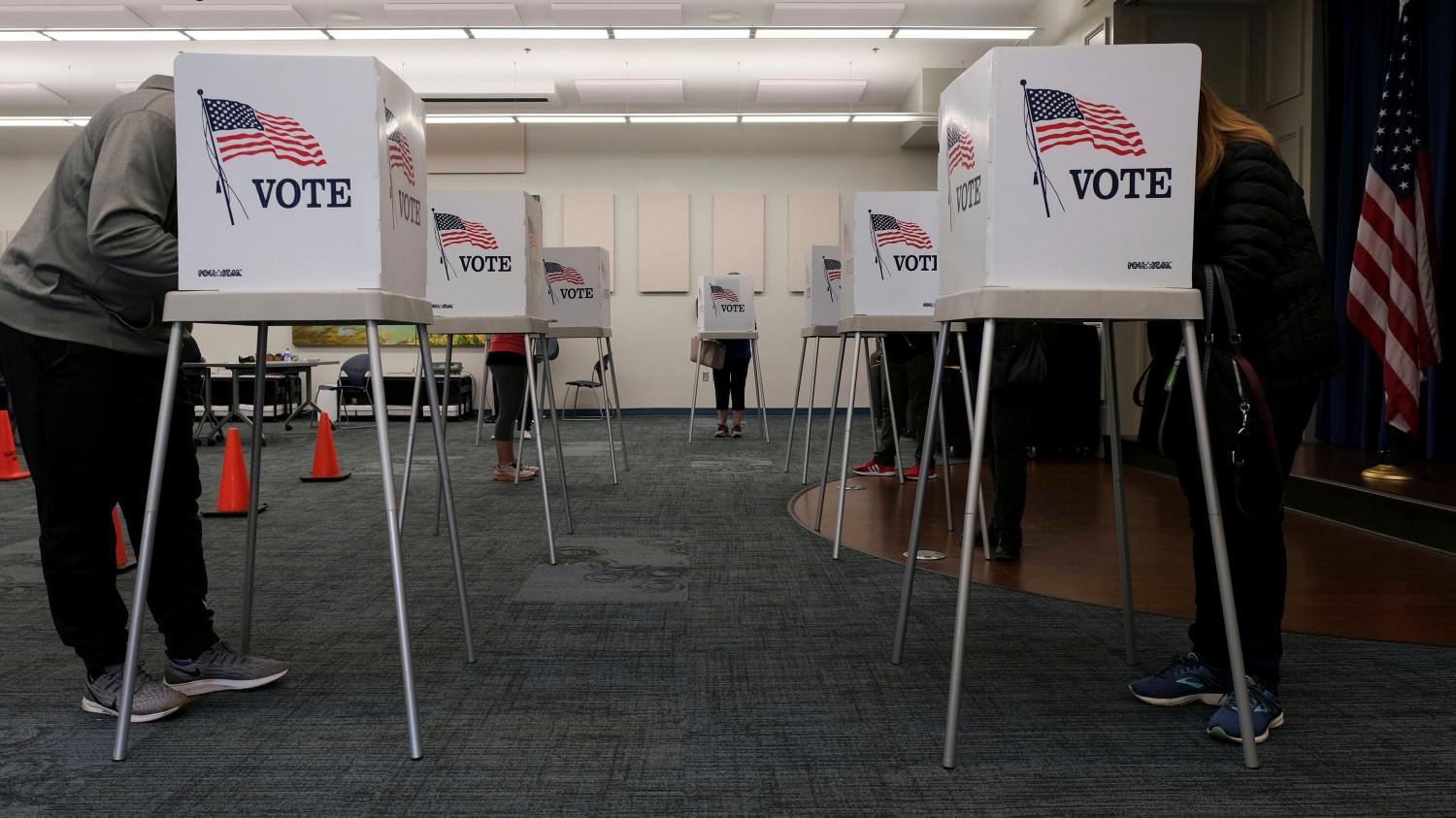 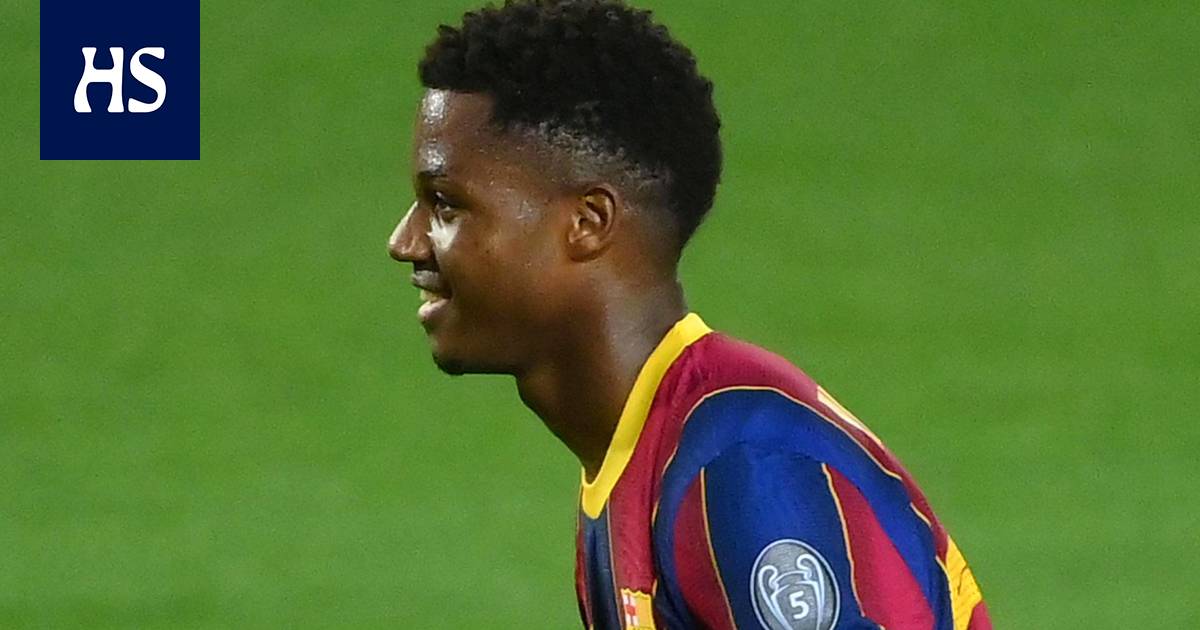 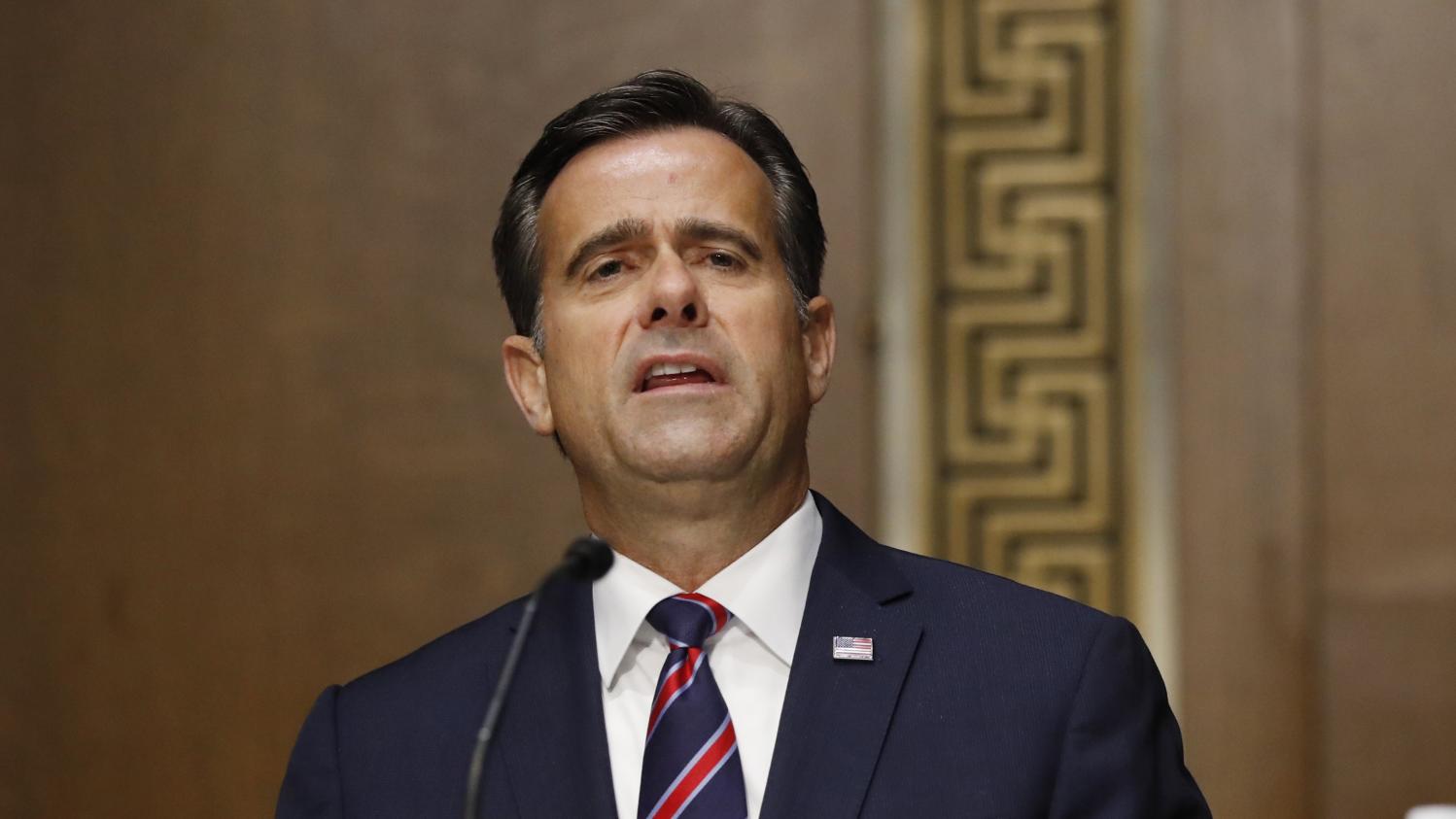 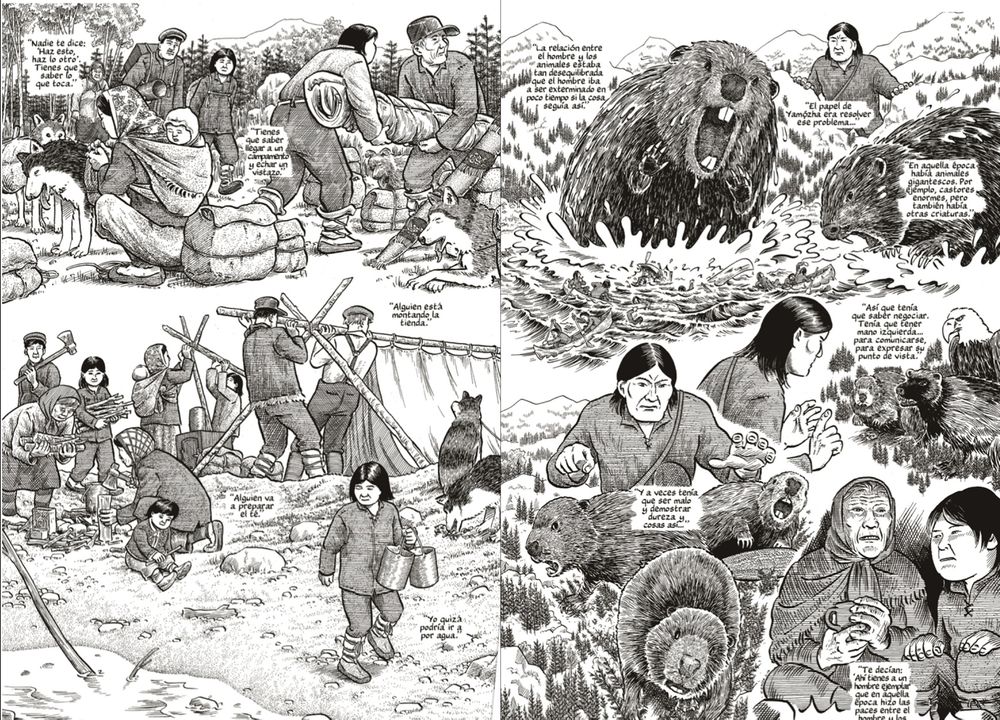 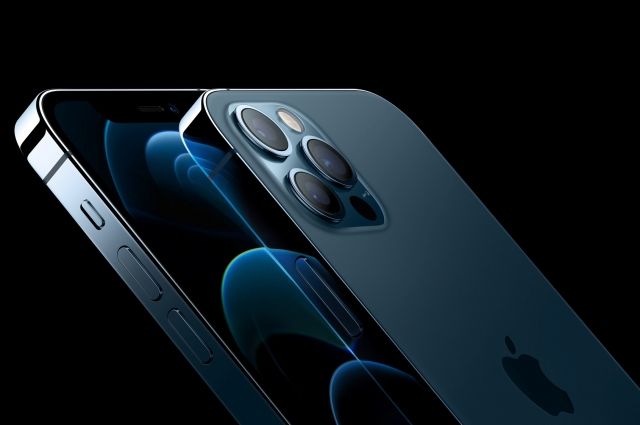