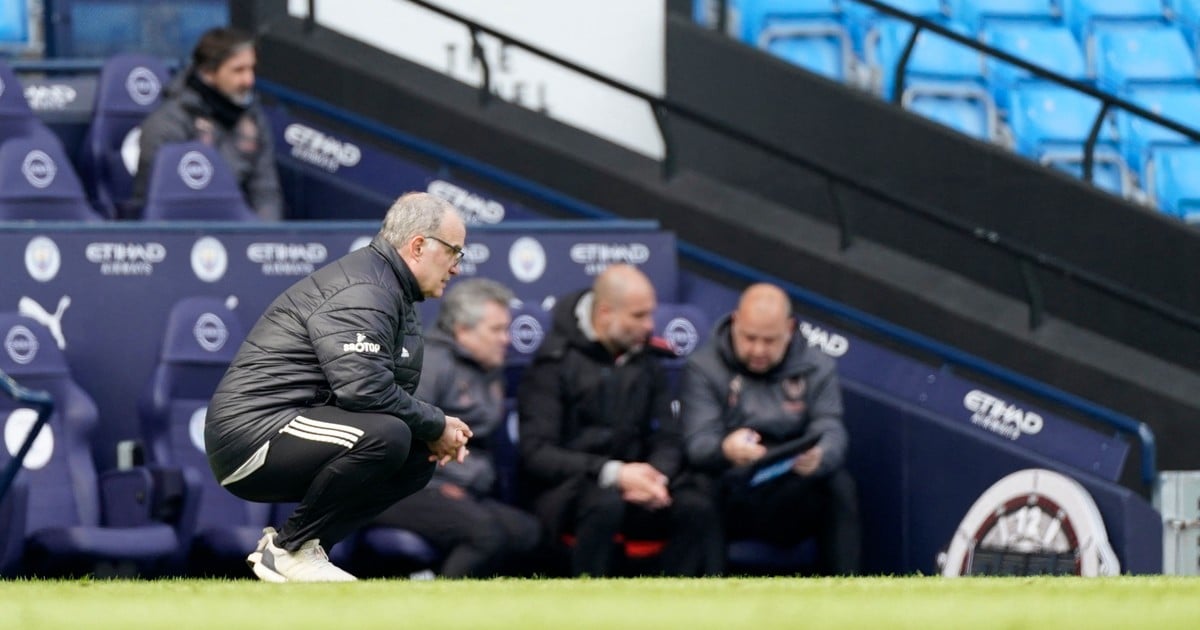 There are thousands of people in front of a television screen on a Saturday morning at 8 am watching a match in the second division of English football. There are thousands of messages on Twitter that explode at the same time with a goal on the hour against Derby County or a play that the VAR cancels when seeing that half knee of Patrick Bamford stays in the forward position. Screenshots are sent with the percentages of possession of the ball, they wait crouching for the final result to tip the balance to both sides. Marcelo Bielsa has done it again.

The Mad he is within an elite of coaches who earned the right not to go unnoticed. Whether he directs in France, in England, in Spain or in a national team, his imprint is going to provoke reactions. And fanaticisms.

With this exception, the current job in Leeds, which this Monday plays against Liverpool (from 4 p.m., ESPN), invites us to be highlighted from the two paths that usually take care of giving an opinion on Bielsa: that of obstinate results and that of irrevocable ideology. .

Marcelo Bielsa talks to Stuart Dallas, one of his key players at Leeds. Reuters photo

They are worth a couple of facts before disseminating its news: Leeds is a historic club in England that managed to ascend to the Premier League this season after 16 years of suffering in the promotion in which it came to play in the third division. From the hand of Bielsa, in the highest category, not only was continuity ensured but he never suffered from the relegation zone. He did it with the fourth lowest budget in the category and with the base of the squad that played in the Championship.

The good performance achieved with the players who came from the promotion implies a reversible issue: on the one hand, their hierarchy stands out to continue imposing conditions against much more difficult rivals but at the same time the reinforcements did not fit in as they intended.

More than $ 250 million secured Leeds by jumping to the first division and part of that income was destined to incorporations: the most resonant signing (and therefore the least fruitful) was that of the Spanish Rodrigo Moreno, for whom Leeds paid $ 36 million to Valencia, a record for the club. It was also added Robin koch, German defender who arrived with the curriculum of having been summoned to the German youth, and for whom they paid 17 million dollars. For Diego Llorente, a defender who came from Real Sociedad, paid out around 23 million dollars. And by Raphinha paid Rennes about 20 million.

The Brazilian Raphinha, the reinforcement that performed the most for Bielsa in the Premier League. Photo: Reuters

Rodrigo started in just 12 of the 21 games in which he was available. He scored three goals. And he already warned that he will not continue in the team. Koch suffered the start of the tournament, was responsible for many goals that Leeds received and then suffered a knee injury that sidelined him for three months: he only played 11 of the 31 Premier matches. Llorente, with three injuries throughout the tournament, only played 9. And the only one who could meet expectations was Raphinha: with six goals and six assists in 26 games, 23 as a starter.

At the time of the game, the idea of ​​the Loco was translated, as expected, in a performance without half measures: three draws in 31 games, 14 wins and 14 victories, 49 goals for and 49 against.

In this dynamic, you can miss an incredible game against a weak opponent or you can force an unexpected victory against anyone who gets in front of you. His merit was not to suffer in the table the irregularity of the results. He did not have streaks of three consecutive losses. And he did now string together, for the first time, three wins in a row: 2-1 against Fulham, Sheffield United and Manchester City.

From the results that leave him tenth in the table with 45 points, closer to the cup zone (9 to Chelsea, fifth) than to the descent (19 to Fulham, 18 °), the conditions arise, the nuances presented by each game and the famous resources used that Bielsa ponders at the time of the final balance.

At this point both extremes are worth: the defeat in the debut against Liverpool and the victory in the last game against Manchester City. Two games that, in the previous one, a team recently promoted to the Premier could consider discarded in its plan of points to be added. “We deserved to win, but it would have been fair for City to win,” the Rosario said with laughter after the agonizing 2-1 in which Leeds, who played the whole complement with one less man, suffered against the Premier’s leader and enjoyed of the effectiveness that he lacked so many times: two shots on goal paid back three points.

The debut against Jürgen Klopp’s team had been the reverse side: Bielsa’s team had managed to sustain the round trip against the English giant, deserved to have won a prize and was left with nothing.

“We have not managed to close the gap with the most important teams in the Premier League, but we must also not forget that we drew with City and Arsenal. With Liverpool we went back three times. But it is true that our level is below the powers “, admitted Bielsa after the fall in London against Arsenal at the end of February.

Seven dates from the end and with the aim of remaining in the category practically buckled, the next two commitments show two games with a very high bar: this Monday against Liverpool and Manchester United, both at home.

But the championship that Leeds had to play was not against the six giants. And there is his other great portion of the merit in this successful campaign: against rivals of similar forces he imposed his offensive vocation and was left with the three points beyond the useless fight in social networks between beltsistas and anti-belistas by the percentages of possession of the ball. or the shots on goal as appropriate according to the final score.

The ability to convince and improve footballers is perhaps Bielsa’s most remarkable virtue as a coach. So there are almost no directed people who speak ill of him.

The face of Marcelo Bielsa on the wall of a market on Hyde Park Road in Leeds. Photo: EFE

In Leeds there is a base that stands: the spine is made up of the goalkeeper Ilan Meslier; Liam cooper, the captain, who in the second division tournament shared behind with Ben white; Kalvin phillips, stopper steering wheel that plays ahead of the line of four and allows the constant projection of the two sides and Patrick Bamford (when he seemed relegated, he responded with 14 goals) as an attacking beacon.

To these are added several pieces that Bielsa can use in different sectors and that facilitated the constant replacement of the equipment. Stuart dallas, who was a left-back in the Championship but then went on to midfield as an insider: that’s how he scored both goals against City. Luke Ayling, who in his genes is a right back, but who at the time of the game can appear as a central or extreme marker with impressive dynamics. Jack Harrison, whom he also Mad He rotated through various positions in the midfield, with a lot of arrival at goal (he has 7). Plus Pascal Struijk, Mateusz Klich and Hélder Costa who are an active part of the rotation. And they relegated Pablo Hernández, the skilled Spaniard who had been decisive with his brushstrokes for promotion, in that area.

A fact is worth it: the other two teams that rose to the Premier with Leeds this season, West Bromwich Albion and Fulham, are in relegation places, along with Sheffield United, in the bottom three steps.

West Bromwich lost 17 games and Fulham 16. The difference to Leeds is small as Bielsa’s team was beaten 14 times. But the distance is marked by the triumphs and there the ambition of the Rosario team, who by going to the front has already reaped 14 victories against 5 of the other two promoted.

“I always think that I am going to stay forever in all the jobs that I accept and I go from one day to the next thinking ‘I will be here the rest of my life’. At the same time, it is a profession that usually has interruptions. It is much more common that a technician is fired from what remains in the same place for a long time, “said the Mad that at 65 he enjoys the club where he spent the longest time directing.

Five kilometers separate his home from the Leeds training center. Bielsa is walking. On his return, he usually stops by Morrisons or Sainsbury’s supermarkets to do the shopping. Take your notebook and read at Costa Coffee and enjoy the pastries of the Italian restaurant Sant Angelo, where there are usually musical shows accompanying the evening.

From these everyday details to the crosses with your interpreter or the effective shots on goal. Every seasoning that surrounds Bielsa generates repercussions.

“I admire him, although I have never really got to know him at all. I have seen his teams play, but the rest of the things I have heard about him have been in the newspapers and such. I like it even without knowing it. He is probably the hardest working coach. We all try very hard, but I don’t think anyone can compete with him in that area. I really want to meet you. He is an inspiration to all coaches for what he is doing. You have an idea, you stick with it, you don’t let go of it, and you end up succeeding. That makes him a very interesting character in this business, ”Klopp praised him.

“I am overwhelmed, I feel weird, he is a great competitor. I will try not to be weak after these words because he can do whatever he wants. I am overwhelmed. I do not know if it is because he is the most honest. When I have the opportunity to talk to him, I’m sure what he says is what he believes. He does not say or do anything for the media or for the repercussions for himself. That is why I am overwhelmed, because everyone of admiration and respect, of the way it helped me in my early days and will always be in my heart, that’s why I always say wow“Guardiola praised him.

The greeting between Bielsa and Guardiola after the clash between Leeds and Manchester City. Photo: Reuters

Beyond the crack caused by fanaticism for DT, Leeds plays in the image and likeness of Bielsa. Without half measures, with an undeniable offensive stamp of play that can only give in when the one in front is a team of the stature of City and twists the wrist.

For the results, it more than met its goal of stabilizing in the top flight with a team almost identical to the one that had been promoted. For the Conceptualists, it did so without needing to change its commandments.

"Anne Will": A lot of noise, no strategy - and Lauterbach interferes himself from home: "Embarrassment"