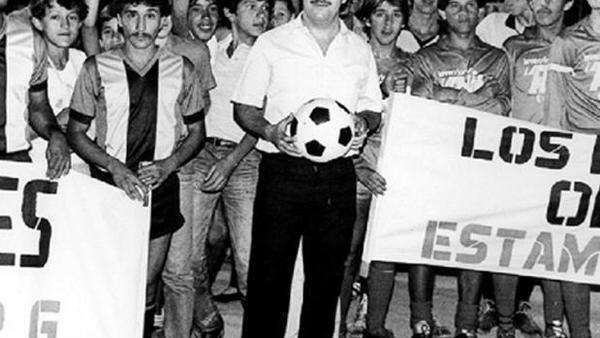 Pablo Escobar, the most emblematic name in the history of drug trafficking and criminality in Colombia and one of the richest men in the world thanks to his cocaine business, took on June 19, 1991 a coldly calculated decision: surrender to the Justice of Colombia.

But, of course, spending his days in jail was not a hasty attitude but an oiled negotiation to protect his life. He went to a jail with all the luxuries, just for himself and his henchmen. And he did it no less than the same day that the Colombian government vote no extradition of drug traffickers to the United States.

The entire delivery process for Pablo Escobar was like a movie. That June 19 at noon, the National Constituent Assembly had approved non-extradition for Colombians. Fifty-one delegates voted yes; 13, no, and 4 abstained.

DEA file photo, when it seized a drug shipment labeled with a photo of Pablo Escobar. The United States sought to extradite him in 1991 but could not.

At four o’clock in the afternoon, in a jeep and with their faces covered, four of the lieutenants of the drug trafficking chief entered the Envigado prison, including John Jairo Velázquez, considered the third man of the Medellín cartel, recalls the chronicle of the daily The country.

Shortly after, the great news was known: Pablo Escobar Gaviria had surrendered to the Colombian justice system. A helicopter picked him up in a mountainous and jungle place and transported him to the Envigado prison, according to the priest. Rafael Garcia Herreros, a key man in this whole plot.

There was another version of how the head of the Medellin cartel and the man most wanted in recent years by Colombian security agencies: the one who says that since eight in the morning, Pablo Escobar was in the Interior. There he would have met with Father Rafael García Herreros, with the Attorney General of the Nation, Carlos Arrieta, with Governor Iván Echevarri and with the Director of Criminal Investigation, Marta Hurtado.

They say that from the official office, Pablo Escobar lived step by step the debate and voting process that eliminated extradition from Colombian legislation. This is how the sentence awarded to the drug traffickers was fulfilled: “We prefer a grave in Colombia to a cell in the United States“.

November 21, 2018, Colombia, Medellin: A gigantic and colorful mural with the face of “El Patron” and the legend “Welcome to the Pablo Escobar neighborhood” presides over the entrance to the “Pablo Escobar” neighborhood. Photo: Daniel Romero / dpa

“Pablo is tired of his irregular life. He is a cornered man who wants to change his life. That is why he is determined to surrender to justice,” the priest Rafael García Herreros had said two months earlier when, to the surprise of Colombians, this religious began a process of rapprochement with the man designated as one of the great criminals in the history of Colombia.

In exchange for your voluntary surrender, Pablo Escobar He demanded respectful treatment and guarantees for his life during the time of imprisonment. Go if he had: armed in the Envigado jail, called “Cathedral”, his bunker where he and his henchmen continued to run their criminal businesses.

In the 2004 biography of Pablo Escobar (Ruiza, Fernández and Tamaro), those years of lead and death that Colombia suffered at the hands of the Medellín Cartel are remembered. It is that the United States saw how more and more drug lords wanted to take more and more participation in politics, and exerted pressure on the Colombian government to force the extradition of the leaders. Among them, Pablo Escobar.

But the reaction of the mafia was in its own way, criminal, sowing death and violence in its wake. There was a list called “The Extraditables“, which included Escobar, who played all or nothing and embarked the country in a spiral of violence, with attacks on politicians and a spiraling wave of violence. Until that June 19, 1991, Congress gave him the safe conduct , voting on the law that prevented their delivery to the United States.

The role of Father García Herreros

The Colombian priest Rafael García Herreros was not only known for creating the oldest television program in Colombia (God’s minute), but rather that name went around the world because it was key for Escobar to surrender to justice. There were rumors and criticism for the closeness of Father García with Escobar.

García Herreros, founder of the Minuto de Dios Corporation, was characterized as a man of dialogue, and his last years of life gave them to seek a way out of the war that the Medellín Cartel waged and that left hundreds of deaths in the country. .

The relationship between the priest and Escobar was surrounded by mysticism, they even said that it was a friendship. In fact, the same Colombian Episcopal Conference came to criticize the strange rapprochement between García Herreros and Escobar: “One thing is conversion and repentance, and quite another to present a criminal as an example,” the Catholic authority reminded him, according to Axis 21 site counts.

The Colombian priest Rafael García Herreros, founder of the Corporation of God and key in the delivery of Palo Escobar. Photo: Week.

García Herreros founded the Minuto de Dios neighborhood in Bogotá and a non-profit entity that bears the same name. He was known in Colombia for the television space ‘El Minute de Dios’, which was broadcast before the newscast on the main channels. And it was in one of those buses in which he told that Pablo Escobar “wants to talk to me, a humble priest.”

It was in April 1991 that García issued a strange message in ‘El Minute de Dios’. He said he was willing to talk with Pablo Escobar on a Caribbean beach, even at the risk of dying in a possible shooting. The intervention noted the following: “They have told me that he wants to surrender. They told me that you want to talk to me, Oh sea, oh sea of ​​Coveñas! At five in the afternoon, when the sun is setting. What should I do? They tell me that he is tired of his life and his struggles, and I can’t tell anyone, my secret. However, it is drowning me inside ”.

The priest also said: “They tell me that he wants to speak to me, a humble priest, that I am not a bishop, nor canonist, nor even episcopal vicar. He tells me to believe in him, that he is a man of his word. I asked him if he would run away from me, from my side, he said no ”.

At the end of the speech broadcast throughout the country, the father acknowledged that he did not know what to do, and closed with the popular phrase: “My God, in your hands we place this day that is past, and the night that is coming.” García Herreros managed to get Pablo Escobar to surrender, but the drug trafficker and criminal continued to commit crimes in “La Catedral.”

Photograph from 2012 of “La Catedral” in Envigado, the luxurious prison that was built for the Colombian drug trafficker Pablo Escobar when he turned himself in to the authorities in 1991. EFE / LUIS EDUARDO NORI

Comor was it “The Cathedral”

“Cathedral”, the exclusive prison to which Pablo Andrés Escobar Gaviria entered, was in a village in the Envigado municipality, neighboring the city of Medellín. And the reality is that behind the mask of “maximum security prison” they were hiding luxurious rooms, game rooms, gym, a natural waterfall, and even a soccer field, and had the doors open without restrictions to relatives, friends and associates of the drug trafficker. It is even said that Pablo Escobar himself repaired it. In those days, the media called it “Maximum Comfort Prison.”

With privileged views of Medellín, Escobar controlled his gangster businesses, ordered assassinations and held parties in which he wasted alcohol, drugs and women along with his henchmen, some of them also “detained” in that jail.

“La Catedral”, the luxurious prison that was built for the Colombian drug trafficker Pablo Escobar, was ceded to the Benedictine monks. (EFE)

When these activities came to light through the press, President Gaviria was forced to transfer Escobar to a real prison, but “The Cocaine Czar” learned of that decision and on the night of July 21 1992 “ran away.” He left for the jail funds, open and without security. He always did what he wanted. And that day he decided to flee.

With Escobar on the run, “La Catedral” was left empty and the residents of Envigado, convinced that its walls hid a fortune, looted the building stone by stone for months. They never found anything.