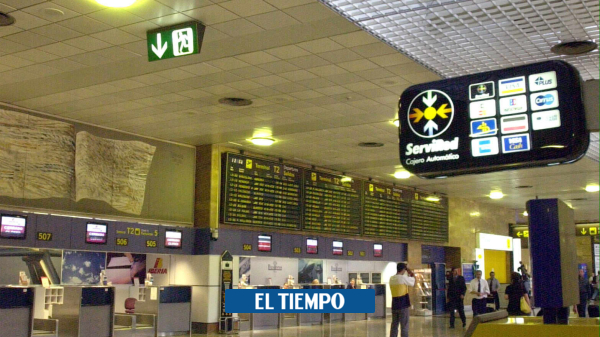 The story of Daniel Valencia, a 26-year-old Colombian, looks like something out of a movie. But not from any movie but from one very similar to that of The terminalthe film starring Tom Hanks in 2004 and which tells the case of Mehran Karimi Nasserian Iranian refugee who lived for 18 years at the Charles de Gaulle airport in Paris.

Daniel had to sleep for a week at the Barajas airport in Madrid. He traveled to Spain, like many Colombians, hoping to build a better future. “Many said it was easy, that it was getting to Spain and finding work. As soon as you landed, your life changed instantly. But it’s not how they paint it, the reality is very different… At first you have to suffer and cry” , tells the young man to the newspaper The worldwho made his story known.

This young Colombian, in his words, from the “lower class”, landed in Madrid on October 25. In his mind, there was only one goal: help his mother and three brothers financiallywho had stayed in Colombia.

(Also: Walmart massacre: the ‘death note’ left by the killer before the crime)

Getting to Spain was not easy. Daniel invested the vast majority of his savings in the plane ticket, which was round trip to enter Spanish territory. According to his account, he had about 400 euros left (just over 2 million Colombian pesos), which he had earmarked for his stay in Madrid.

“I planned to spend 100 euros a day (about 500,000 Colombian pesos), including food, transportation, and a hostel. I had calculated that in those four days I would find a job,” the young man told the Spanish outlet.

(You can read: Why Canada wants to receive 1.5 million immigrants by 2025)

I planned to spend 100 euros a day, between food, transportation and a hostel. He had calculated that in those four days he would find a job.

However, the plan did not turn out as expected. Daniel went to bars, visited all kinds of stores and even applied to work in construction. But no one hired him. He even speaks of feeling “humiliated” and of having been mistreated in the places he went.

Thus, he ran out of money.

Daniel was in another country without his family, without a place to spend the night, and without sufficient resources.

(Keep reading: Four women tried to murder a 5-year-old boy while they were abusing him)

In his testimony to The world, the young Colombian recounted that on his first night without accommodation he spent it, suitcase in hand, going up and down the Gran Vía, one of the most famous roads in Madrid. That night he could not sleep because he felt very cold.

Then came the second night. Since early in the afternoon she suspected that it would be the same as before, so she decided to go to the airport. Ultimately, it was perhaps the place he knew best and where he could protect himself from the cold of the night and feel safer.

And so the airport became a kind of home.

(Also: A cardinal tried for fraud records Pope Francis without his consent)

The Colombian who slept for a week at the Barajas airport after running out of money: “They said that when you arrived in Spain your life changed instantly” https://t.co/h5nF6i4OjS

“I ate once a day, the airport machines are very expensive. But after the second day I calmed down a lot. I believe in God a lot and I knew that at some point my luck would change,” he said.

(See also: Passenger who would have fallen from a cruise ship was found in the Gulf of Mexico)

Fate changed him on the night of November 5. It was Saturday. A man, also Colombian, arrived at the airport and recorded a video of Daniel. He posted it on Facebook and it immediately went viral.

(Keep reading: Disney clothes for children are removed from the market due to risk of poisoning)

The bathrooms where Daniel had to sleep at the airport.

What came next was a wave of solidarity. Daniel began to receive hundreds of messages and calls to his cell phone. In these they offered him bed, food and toilet. According to his account, this reaction surprised him.

“I didn’t know what my life was going to be like. And, suddenly, people I didn’t know at all wanted to help me, many of them had gone through the same thing,” said the young Colombian.

(You can read: 13-year sentence for Chinese-Canadian singer Kris Wu for rape)

Residents of Madrid contacted him, but also from other cities, such as Valencia and Barcelona. Even the video of him crossed borders and he reached Italy and Switzerland, where several people offered him help.

“A woman who worked in Terminal 4 told me to go to her terminal. There I was able to shower and eat. She even gave me some money to take the Metro,” she said.

(You may be interested in: Mexico: a “pizza delivery man” enters a hotel and murders two guests)

I didn’t know what was going to become of my life. And, suddenly, people I didn’t know at all wanted to help me, many of them had been through the same thing.

According to his account, that night he no longer had to stay at the airport and slept in a house in the Opañel neighborhood.

The following night was spent in another house, located in Plaza Elíptica. And the following where she currently lives: in the Canillas neighborhood, in an apartment that he shares with six people. There, Daniel assures, they let him stay “without paying until the end of the month.”

“I am improving little by little, and I really like Madrid. I have only worked twice, for hours. One, washing a kitchen; the other, unloading trucks. Although I would like something more stable, as a waiter or a gym trainer, to be able to subsist on my own,” added the young man, who clings to hope, although he acknowledges that the lack of papers is an obstacle for him to find a job.

(We recommend: Mexico: the fine that a tourist who climbed the pyramid of Chichén Itzá had to pay)

Nonetheless, Daniel says he does not regret having traveled. “I want to fulfill the goal of helping my family.”

According to figures from the Spanish authorities, between January and June of this year the number of foreign inhabitants in that country reached 172,456 people, which represents 11.7% of the total population.

World Cup, betting is already booming: 150 million bet in the first round