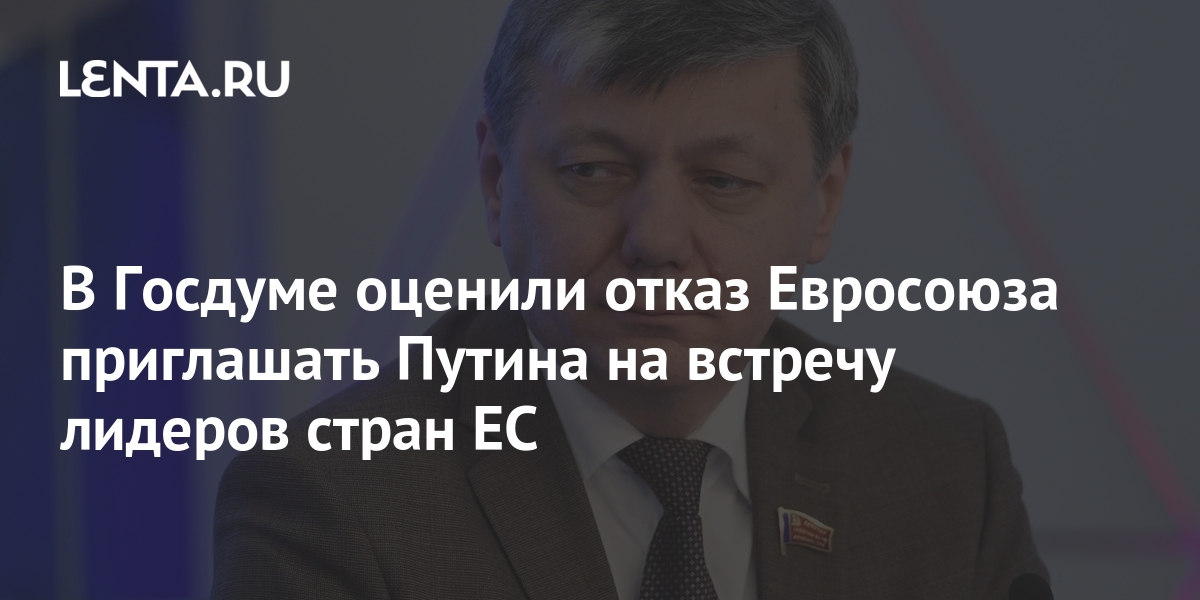 First Deputy Chairman of the State Duma Committee on International Affairs Dmitry Novikov in a conversation with “Lenta.ru” assessed the refusal of the heads of state and government of the European Union to invite Russian President Vladimir Putin to a meeting of the leaders of the EU countries. According to him, “this confrontational style does not meet the fundamental interests of these countries themselves and their peoples.”

“The topic of attempts to put pressure on Russia is not new at all. There were already many tensions. If the European Union does not take advantage of the opportunities provided by the meeting between Putin and [президента США Джо] Biden, and will try, on the contrary, to reformat the agenda in the direction of further deterioration of our relations, then I can say one thing – this confrontational style does not meet the fundamental interests of these countries themselves and their peoples. One thing is the political games of people burdened with powers in the government, and another thing is the real needs of the people of these states, ”Novikov said.

The deputy drew attention to the fact that any belligerent rhetoric, whether in relation to Russia, China or someone else, always has a downside associated with serious security spending. Such decisions lead to the emergence of tasks that “would not be actualized in the event of the development of normal good-neighborly relations”.

According to Novikov, the current situation naturally serves someone’s interests. “This is in the interests of the military-industrial groups. Even not so much to the interests of the generals, some of whom also do not mind sometimes flapping their weapons, but to a greater extent those who enrich themselves on military orders, ”he summed up.

According to Novikov, what to do in this situation is “completely understandable.”

“In this case, highly professional diplomats are needed,” the politician noted. – But this is only the second task after solving the first. No strong diplomat compensates for the weakness of his country if it does not develop, does not advance, but degrades. If the economy and social sphere of the country are weak, if the problems associated with the scientific and technical equipment of production are accumulating, plus culture does not offer attractive models, samples to which representatives of the intelligentsia and culture of other countries will reach, and thereby will affect the social climate and the climate of interstate relationships. Today Russia has only one way out – to start getting stronger. Stronger, above all, economically. “

The politician stressed that a strong economy is the only solid foundation to prevent any threats. According to him, “practice shows that contracts, sealed by even the” largest “signatures, are sometimes broken and sent to the scrap.”

Earlier, the participants in the EU summit held in Brussels decided to extend the anti-Russian economic sanctions imposed due to the situation with Ukraine. In addition, the heads of state and government of the European Union instructed the EU foreign policy service under the leadership of Josep Borrell to study the possibility of introducing new sanctions against Russia.