The South American Club League, that Angelici attempt to put together a ‘parallel Conmebol’ that vanished 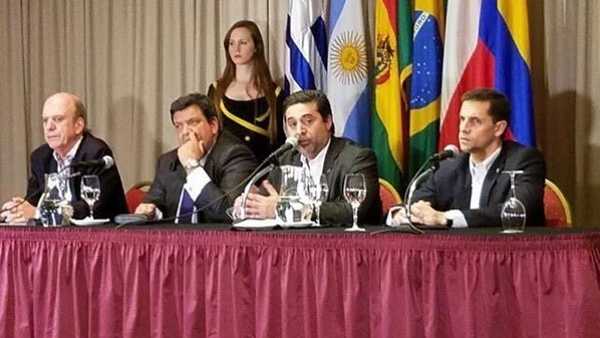 The earthquake that was unleashed in Europe as a result of the creation of the Super League with 12 of the most important clubs of the Old Continent as founders triggered a movement of plaques among the organizations that make up world football. And while FIFA, UEFA, Florentino Pérez and company resolve their issues, in Conmebol they remember that five years ago that could have happened under their noses, when they sought to impose a South American League of Clubs that made up 15 clubs but that dismembered soon after.

In 2015, the FIFAGate scandal had led to arrests for corruption of the entire leadership of world football that completely dismantled the leadership of the continental entity. From Juan Ángel Napout (sentenced to 9 years in prison) to José María Marín (Brazil) or José Luis Meiszner, the explosion of the South American soccer house invited a bid for the new power in Conmebol, the one that already had to Alejandro Domínguez as its president.

However, with various clubs spearheading and driving new political and economic agreements for the region, an attempt was made to create a Parallel Conmebol. On January 12, 2016, in Montevideo, a new leadership structure was founded and Daniel Angelici (Boca), Rodolfo D’Onofrio (River), Matías Lammens (San Lorenzo) and Víctor Blanco (Racing) participated as representatives. of Argentine soccer. But there, Peñarol, Nacional, Colo Colo, Universidad de Chile, Universidad Católica and Liga de Quito were grouped. It was the kickoff.

Months later, in Buenos Aires (the meeting was held at the hotel owned by Víctor Blanco) and with Angelici (then president of Boca) positioned as the leader in charge of the fight against Conmebol, the team base expanded : Olimpia, Cerro Porteño, groups from Venezuela, Peru and Colombia arrived. But the heaviest blow occurred with the irruption of Gremio, Corinthians, Inter de Porto Alegre and San Pablo. With the traction of the Brazilian powers, the threat became serious against the entity with series in Asunción. There were 15 historical teams behind the same idea.

The initial objective of better discussing the economic income from the transmission of the matches (something that finally happened, because it went from 7 million dollars in prizes to 20 in this last edition), sponsorship and form of dispute grew in interest: the League Sudamericana de Clubes aimed to organize its own competitions, with the powerful teams of the region at the forefront. A photocopy of what is posed and I push now from the other side of the ocean. But…

Already in March of that year, in São Paulo, the adhesions had begun to diminish in the internal politics that had already been generated among the managers themselves who were looking for a continental schism. Among those who decided to continue participating under the orbit of Conmebol and those willing to go for everyone. For some the limit was economic. Others wanted to run Alejandro Domínguez from the presidency.

The leaders of 15 clubs met in Montevideo and created the South American League. (EFE)

In July of that year the positions of the nascent League were voted. Y Angelici was elected its president, with Romildo Bazán Jr. (Guild of Brazil) as 1st vice president; Álvaro Martínez (Deportivo Cali from Colombia) as 2nd vice president; and Freddy Tellez Claros (The Strongest of Bolivia) as 3rd vice president. A detail: in those elections the River relationship was fractured, which voted against Angelici and approached the leadership of Conmebol.

The momentum of the South American League was reduced, over the months, to motions for increases in sponsorship and prizes. The constant leadership changes in the main teams and the political crossroads in the bowels of an intervened AFA weakened everything. Even in 2017, FIFA and CONMEBOL vetoed the suitability and transparency test that allowed Angelici hold a position in the house of South American football. A marked bill pass.

After that, the “allies” of Brazil clung to the command of Asunción. The same did the Pacific bloc (Colombia, Ecuador and Peru). At that point, Angelici had been left alone and although the owner of Conmebol tried to get rid of that idea, the relationship with Boca could never be corrected until the last day from Angelici’s leadership, when he lost the elections to Jorge Amor Ameal and Juan Román Riquelme in December 2019.

From that booming start to the year to the present, the South American Club League has been reduced to nothing. Conmebol, yes, extended its meetings to the clubs and not only to the Federations of the countries and quintupled the awards ceremony in addition to adopting new ideas such as the unique finals of the Libertadores, the South American and even arranged changes in calendars, quantities of teams and expanded qualification quotas to the strongest countries.

The earthquake in South America it was hardly a shock.