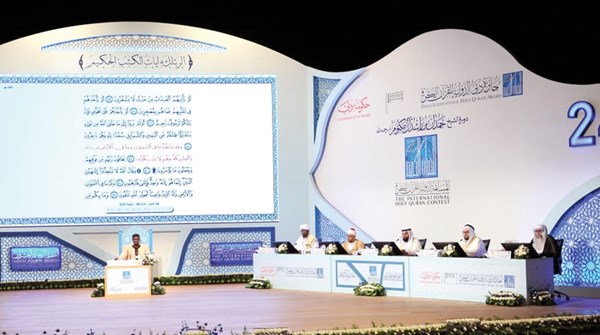 Followers of the tournament of Sheikh Hamdan bin Rashid (may God have mercy on him) described the Dubai International Prize for the Holy Qur’an, that the fifth day of the session was the day of the greatest surprise, because of the performance presented by the representative of Somalia, Muhammad Hassan Hussein, which made him join the list of competitors in the first place in the competition.
The performance of this contestant was characterized by calmness, mastery, and a wonderful ability to vary the pitch of the voice, without causing a cacophony, so that he was moving between the maqamat of reading in a professional manner that made him not busy with memorization, and the focus on diversifying the reading volumes in a smooth and beautiful way, as Hussain has A long breath for reading, and a voice is the best so far among the contestants who took the tests, and thus the Somali contestant came from afar towards the front, especially since he was only given one warning because of a mistake in reading.
Expectations indicate that there is a great and unprecedented competition among the contestants participating in the current session of the competition, and some of them obtained almost complete grades due to the strength of memorization and the application of the provisions of intonation and good performance, which are the three criteria on which the grades are distributed, where the first constitutes 70%, the second 25%, and the third 5%.
The jury of the Dubai International Competition for the Holy Quran continued yesterday evening «Sunday» to listen to a new group of contestants applying to compete in the preservation, intonation and recitation of the Book of God, and they are: Muhammad Hassan Hussein from Somalia, Mohsen Yahya Ahmed Shaafel from Yemen, and Abd al-Bar Sadisu from Al-Banin, and Luqman Yunus, from Ghana, at the Culture and Science Symposium Hall in Dubai. In a meeting with the Somali contestant, Al-Hafiz Muhammad Hassan Hussain, he said: “I came to the UAE with a scholarship from the University of Sharjah to complete my studies. I am a student in the College of Pharmacy in the third year, and at the age of six my family moved from the village to the city, and there I started my journey of memorizing the Holy Qur’an at the age of seven, and I sealed it at the age of tenth”.
He added: “My father memorizes the Qur’an, and he is the one who encouraged me to memorize, and I have four of the brothers who have memorized.”

Emirates scholarships
The contestant, Hafiz Mohsen Yahya Ahmed Shaafal, representative of Yemen, who performed excellently on that day, and only 3 warnings were given to him, stated that he is studying in the eleventh grade, that he began memorizing the Noble Qur’an at the age of nine first at home and then moved to one of the memorization centers in the Emirate of Ajman. Then at the Maktoum Memorization Centers in Dubai, pointing out that he is the son of a family who has memorized the Book of God, as his father and mother memorize the Qur’an, as well as all three of his brothers, participated in the Sharjah competition, the Ajman competition, and the Sheikha Hind contest, indicating that this is the first international competition in which he participates. He said: “When I was memorizing, I used to see the Dubai competition and follow it, and I wished to conclude that I would participate in it. I even intensified my review when my registration was confirmed for participation. I used to review five parts a day, and because of the competition, as it approached, I began reviewing fifteen parts per day.” As for the contestant, Abd al-Bar Sadisu, a representative for boys, he said: “I started memorizing the Qur’an from childhood and sealed it at the age of twelve. I came to the UAE with a scholarship from Al-Qasimia University, and I am currently in the third year majoring in Sharia.” He added: “My parents encouraged me to memorize, and I have three brothers, all of whom memorize the Qur’an, so that the youngest, who is fifteen years old, is preparing from now to participate in the next rounds of this important Qur’anic competition. I participated in the year 2017 AD in the competition in Indonesia, and in many local competitions. In my country », pointing out that the one who encouraged him to memorize in the beginning was his father’s love for Sheikh Al Hosari, who he used to hear a lot, so that he was greatly affected by the way he read it, and from here his story began with the Qur’an. He said: “I had a brother who would encourage me a lot, give me advice, and always remind me that the Qur’an is everything in life, and that it must be memorized, because the Qur’an is life.”
The contestant, Luqman Yunus, the representative of Ghana, who went to the United Arab Emirates a year and a half ago to lead the worshipers in Ras Al Khaimah, and aspired to complete his studies at Al Qasimia University, said, “He began memorizing the Noble Qur’an at the age of sixteen and completed his memorization in about two years. He was encouraged by his big brother who used to memorize the Noble Qur’an. Also, his parents supported him. ”

Mauricio Macri crossed Axel Kicillof and the teachers' unions for face-to-face classes: 'They make political use of the situation'