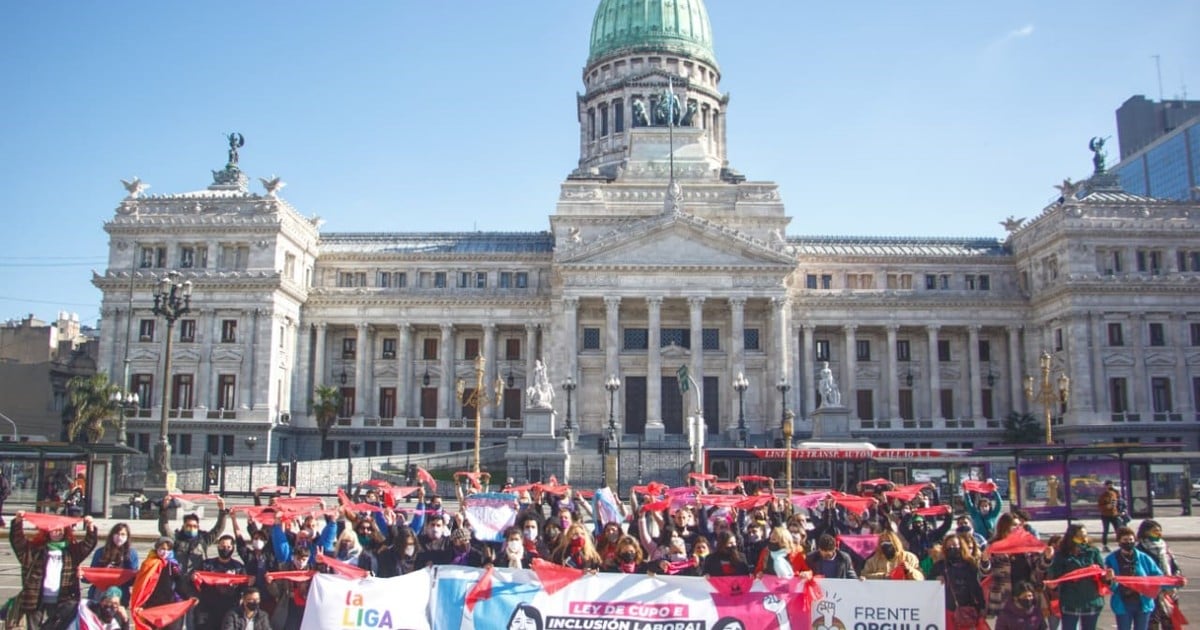 After more than two hours of debate with emotional speeches, the Senate almost unanimously signed into law the bill that creates a 1% job quota for transvestites, transsexuals and transgender people in the public administration. In addition, it provides incentives for hiring this group in the private sector and preferential credit lines for their ventures.

The so-called Diana Sacayán – Lohana Berkins Law, in honor of the deceased activists for the labor rights of this community, was approved by 55 affirmative votes, 1 negative (from Ernesto Martínez del PRO) and 6 abstentions Together for Change (by Julio Cobos, Roberto Basualdo, Silvia Elías de Pérez, Laura Rodríguez Machado, Belén Tapia and Humberto Schiavoni).

“This law compensates a little for so much pain and helplessness suffered for decades. It is a positive action of inclusion. We discuss more than a quota law, we discuss whether this group is going to begin to obtain the rights that correspond to it, “said the official senator and president of the Women’s Bank, Norma Durango, who recalled the case of Tehuel de La Torre who disappeared looking for a job.

Senator Gladys González (PRO) surprised with an honest speech, in which she was sorry for her vote against equal marriage in 2010.

“I did not understand equal marriage. That made him vote with a partial, conditioned gaze, full of prejudice and ignorance. Today I don’t want the same to happen to me. I want to vote seeing with a capital letter, recognize and value the other. Do not look the other way by denying, “he said.

In turn, he responded to criticism from those who believe that it is not a priority law now: “Perhaps this is not the time, but when was it? How much more time does it take for them to have a decent life? How much more violence, suffering and death? “, added.

Throughout the debate it was reiterated on several occasions that the life expectancy of transvestites, transsexuals and transgender people is between 35 and 41 years.

“The objective of this law is that this population that has been invisible for so long can access a decent job that makes it possible to improve their quality of life“Said Carlos Lovera, president of the Labor Commission. Lovera and the radical Luis Naidenoff were the only male speakers in the debate, in which 13 senators participated.
.

“When Congress deals with the enactment of these types of laws, which attempt to turn the page in a history of discrimination against vulnerable sectors, it is always progress,” said the head of the Juntos por el Cambio interblock.

So far, the transvestite-trans labor quota was established by decree by President Alberto Fernández in 2020, but the fact that it becomes law is a significant step towards its consolidation.

The initiative was promoted by the Pride and Struggle Front, the LGBTIQ + League of the Provinces and the Federal Trans and Travesti Argentina Convocation, together with the deputies Gabriela Estévez, Mónica Macha, Vanesa Siley and Cristina Álvarez Rodríguez.

“This achievement is the continuation of the progress we have made with decree 721/2020 of the Transvestite Labor Quota in the National Public Sector,” the President wrote.

I celebrate the sanction of the Law for the Promotion of Access to Formal Employment for Transvestites, Transsexuals and Transgender people 🏳️‍⚧️

This achievement is the continuation of the advances that we have made with decree 721/2020 of the Transvestite Labor Quota in the National Public Sector. pic.twitter.com/YAo4fkEZ3g

What the law stipulates

– That the national State, its three powers, its companies and societies must occupy a proportion of not less than 1% of all its personnel with transvestite, transsexual and transgender people, in all contracting modalities.

– Clarifies that this provision “in no case should imply the cessation of existing labor relations at the time of its sanction.”

– It establishes that the educational completion requirement is not an obstacle to hiring. On the contrary, their admission will be allowed with the condition of taking the required educational levels.

– The “irrelevant” criminal record will not be an obstacle either, considering the particular situation of vulnerability of this group.

– Those companies that comply with the trans quota will have priority in the contracting of the State.

– Incentives for the private sector: employer contributions generated by hiring the beneficiaries of the law may be taken as payment on account of national taxes for one year and, in the case of micro and SMEs, two years.