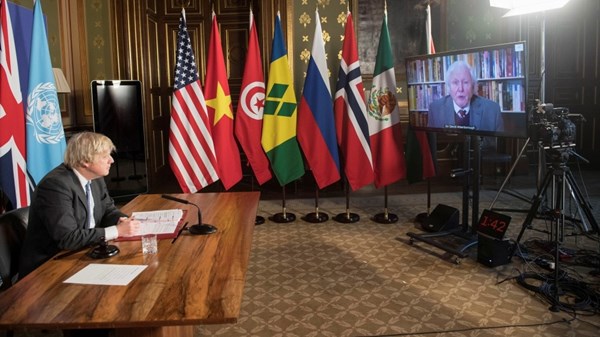 Today, Tuesday, the United Nations Security Council held a rare session devoted to the impact of climate change on world peace.
The meeting marks a departure from the traditional Security Council meetings that focus on avoiding conflict or establishing peace-keeping operations.
British Prime Minister Boris Johnson said the climate crisis was exacerbating instability in the world.
“It is absolutely clear that climate change poses a threat to our collective security and the security of our nations,” Johnson stressed, while presiding over a virtual session of the council.
“I know there are people all over the world who will say, this … is nothing but green notes from a bunch of tree-hugging tofu lovers that do not fit with international diplomacy and international politics … but I can only disagree with them,” the British prime minister added More and in depth ».
Johnson emphasized that helping vulnerable countries adapt to climate change and reduce global emissions to net zero will help protect biodiversity as well as prosperity and security.
He cited, for example, how farmers become vulnerable to extreme stances when their crops dry up, or how girls fall prey to human trafficking when they move away from home during their daily search for water.
He asked, “When can we do something to move now?” He concluded his speech by saying, “Whether you like it or not, the issue is when and not whether your country and your people will have to deal with the security implications of climate change.”
For his part, the veteran British naturalist Sir David Attenborough likened the threat to human civilization to the threat presented by World War II in his youth.
But he said that the new threats “do not separate us … They are threats that must unite us, regardless of which part of the world we come from, because they confront us all.”
“The change required in and of itself seems enormous, which of course it is, but we already have many techniques needed, at least for the initial changes,” he said. Perhaps most importantly, we also have a level of public support and a demand for action like that I have personally not seen before.
UN Secretary-General Antonio Guterres cited a study by the Stockholm International Peace Research Institute that found that eight of the 10 countries that hosted the largest multilateral peace operations in 2018 were in regions highly vulnerable to the impacts of climate change.

Queues for vaccination at Son Dureta