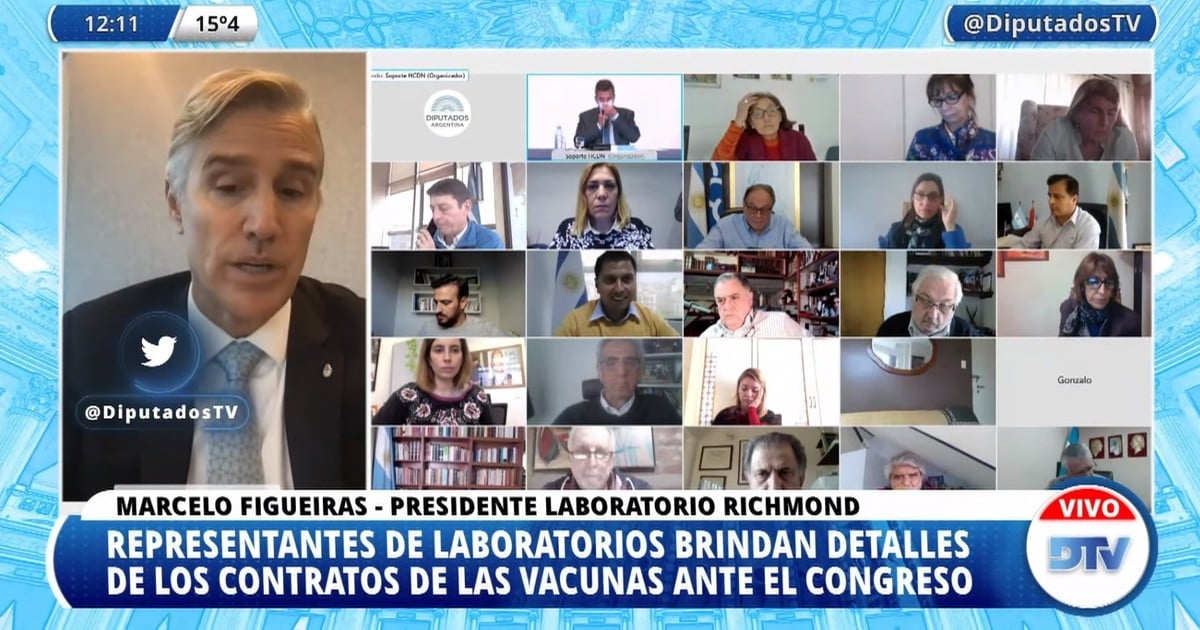 They were not the delivery of the glaciers, the Iguazu falls, or the frigate Libertad. It was a word. In the original vaccine bill of the ruling party the word negligence was not included to give a legal framework to the contracts that were to be signed with the producing laboratories, but it was added in the Chamber of Deputies.

This is the key definition because according to what the manager of Pfizer in Argentina, Nicolás Blaquer, said yesterday in Congress was the main disagreement with the government for a contract that was to supply almost 13 million vaccines to the country last March.

Vaquer explained that the development of a normal vaccine takes between 7 and 10 years development and that Pfizer “assumed the risk of speeding up processes.”

“This speed required by everyone brought with it the unusual risk of unprecedented demand. Therefore, Pfizer asks for immunity clauses and other protections. They are consistent in 116 countries that we have already signed an agreement, “detailed Vaquer.

That is, an immunity coverage for in this emergency not being able to be accused of negligence before the Justice if the vaccines failed or produced collateral effects.

The sequence was the following of these urgent meetings. September 29, 2020 Parliamentary Procedure No. 137 was published on the Deputies website.

On Wednesday, September 30, 2020, the deputy of the Frente de Todos Cecilia Moreau, asked the Secretary of Administrative Management of Health, Mauricio Monsalvo, si the word negligence was included in the bill (Watch video).

Specifically, he asked Monsalvo: “Are the proposed clauses regarding indemnity do they include indemnity for the “negligence” of the developers?“

And Monsalvo replied that not. Three days later, the president of the Social Action and Public Health commission, Deputy K Pablo Yedlin sent a document to his peers entitled “vac covid definivo.docx”.

In that document, he indicated that there were several contributions from “Tonelli, Cano, Najul including Moreau and things that emerged from today’s questions.” There for the first Once the word “negligence” appears written in Article 4, precisely as an exception to “the clauses that establish conditions of patrimonial indemnity”.

This article of Law 27.573 allows the Government to incorporate in the contracts “clauses that establish conditions of patrimonial indemnity with respect to compensation and other pecuniary claims related to and in favor of those who participate in the research, development, manufacture, supply and supply of vaccines, with the exception of those originated in fraudulent maneuvers, malicious conduct or negligence on the part of the aforementioned subjects ”.

On October 1, an email is received from that committee of Deputies called “Work Material” where documents for today’s meeting are attached.

Vaquer said that that same day, October 1, negotiated with Monsalvo and the negotiation failed due to the inclusion of the word negligence and its legal implications for Argentine and North American laws.

The vice president of the Commission for Social Action and Public Health, Carmen Polledo, endorsed this sequence and criticized Governor Axel Kicillof for attributing the legal bar “to a member of the opposition”, alluding to Graciela Ocaña.

CM stands for Cecilia Moreau who is politically linked to the Buenos Aires Vice Minister of Health, Nicolás Kreplak, one of the toughest officials against laboratories.

At the meeting of the Social Action and Public Health Commission on that day, the committee’s opinion with modifications (OD No. 124/2020, printed on October 2, 2020) with the new wording of Article 4 is signed. It was voted with the support of all the blocks.

In radio statements, Moreau admitted that she pushed for the inclusion of the word “negligence” based on that consultation he made to the secretary Monsalvo and that later “the advisers of the Commission for Social Action and Public Health incorporated the text into the bill.”

“The truth is that negligence, fraudulent, malicious behavior is something that we incorporate all. Let’s see, if I had to incorporate it, I would incorporate it. It was raised by the deputy (Claudia) Najul (UCR), the deputy (Graciela) Ocaña (PRO) at the time, I raised it, it was done in the work of drafting the project as a whole, “he said.

Actually, Ocaña remembered Clarion who asked that a constitutionalist be summoned to testify and asked about international ethics conventions that conflict with the use of the laboratories of compensation requests as heard in the audio but did not ask for its inclusion. In addition, he did make five written requests to include and all were rejected.

For Ocaña, the then Minister of Health Ginés Gonzalez García “I did not intend to give the contract to Pfizer, but to AstraZéneca. “In addition, the project was modified in the venue to specify that if the ANMAT did not approve a vaccine in 30 days, the Ministry of Health could do it directly and thus began to negotiate with Russia for Sputnik V, which is another story.