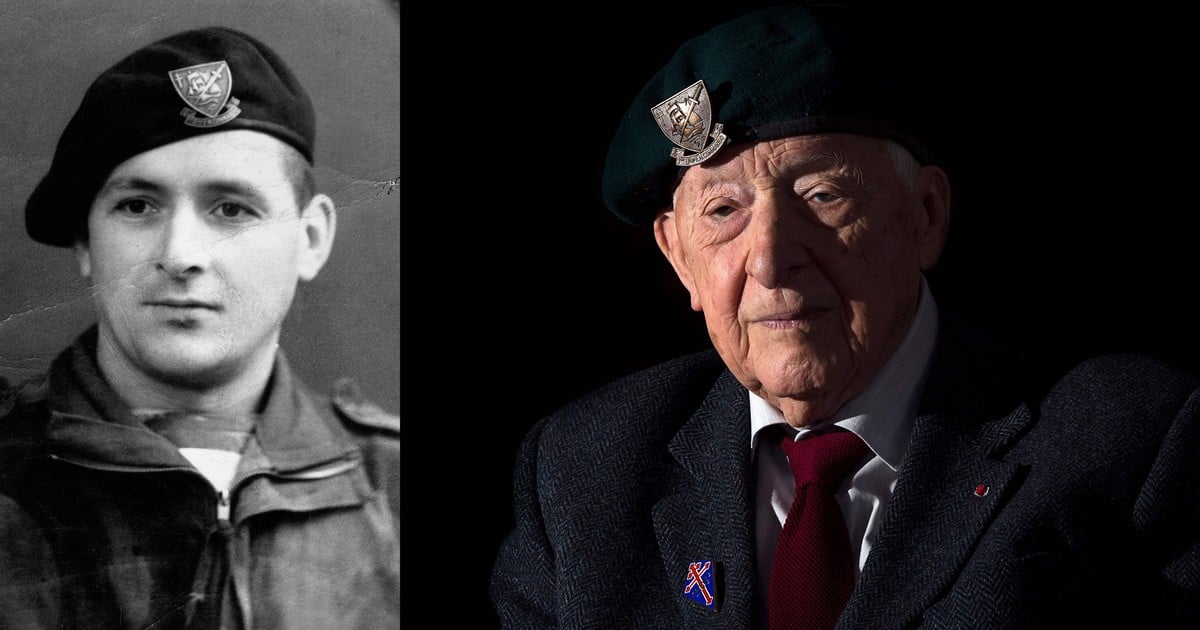 “The future passes through the past. The youth of today must know what happened to learn and continue. Without achieving what was achieved in that landing today we would still be under the german boot“. The reflection belongs to Hubert faure, the penultimate survivor of the French command that participated in the Normandy landing, who died this Saturday, at the age of 106.

The French Defense Ministry was the entity in charge of announcing his death, remembered as “Hero of the ‘Free France‘”for being part of one of 177 French D-Day who landed in Normandy on June 6, 1944.

Faure’s story is worthy of a movie, like the many that were made around that day when, for many, the history of World War II changed.

Faure was captured twice before D-Day, but both times he managed to escape. AFP photo.

The French soldier had been captured in his country by the Germans in June 1940, but months later managed to escape to Spain, where the Francoists captured him again. Hubert managed to flee once more and he went walking to Portugal.

There, as it was a neutral country, he obtained help to reach England, where he joined the Kieffer command, a Battalion of Marine Riflemen Led by Marine Lieutenant Philippe Kieffer.

“On May 25, 1942, they told us to prepare to liberate Europe from the Nazis. The commander told us that it would be a very tough battle, which they calculated a loss of 50% of the troops. He also told us that those of us who wanted to leave could do so and no grudge would be held against them. But nobody gave up“, Faure said in different interviews.

The arrival of soldiers during the Normandy landings on June 6, 1944. EFE / British Ministry of Defense

Commander Kieffer was right. Of the 177 who landed on June 6, 1944, 10 were killed on the same day and 10 during the following days. Only 24 men finished the Normandy campaign without being injured.

“We spent 15 days preparing the operation in a secret camp in Southampton. It was there that we found out that due to the weather the operation had been completed. postponed until June 6“he recalled in different interviews.

Faure recounted in great detail how those days of war were like: “We embarked in the afternoon, to travel all night and arrive early the next day to the shores of France. During the journey we heard the English planes overhead, who were heading to bomb the German positions“.

German prisoners captured after the D-Day landings in Normandy. / US. National Archives via The New York Times

What struck Faure the most was the arrival, the famous Normandy landing: “When we arrived there were battleships, torpedo boats, tanks that were beginning to descend. It was formidable to see that scene“.

When the ship in which he was traveling went down the ramps to be able to step on the sand at the bottom of the sea, the place was already packed with bodies of dead and wounded soldiers, “so the captain decided that the only option was jump into the water from above the boat“.

This Saturday, the 106-year-old man passed away. And his death leaves Léon Gautier, 98, as the only survivor French of the Kieffer command in that operation.

Rifles crossed in the sand in tribute to a soldier killed after the landing, in Normandy. / US Coast Guard via The New York Times

“A handful of brave men of the army of liberty. Stepping on the sand of Colleville-sur-Orne and Ouistreham, they embodied France, they were the soul of our nation“said the statement from the Ministry of Defense released after Faure’s death.

“On June 6, 1944, despite the shooting and stiff resistance, they lived up to the hopes and they achieved their goals. In the forests of Normandy, despite German tenacity, the marine riflemen managed to hold their positions for weeks“continued the text.

“Grand Cross of the Legion of Honor, Huber Faure is an example of those French combatants who, by embracing the cause of their homeland, defended the honor of our country and allowed him to sit at the table of the victors“.

Defense Minister Florence Parly and Deputy Minister Geneviève Darrieussecq expressed their “deep sadness” and “accompanied their family and relatives in their sentiment.”

Tunisia imposes a lockdown before Eid

Jovic does not avoid the shipwreck and gives hope to Haaland