The search for the origin of the coronavirus pandemic is “paralyzed”, denounce the WHO scientists 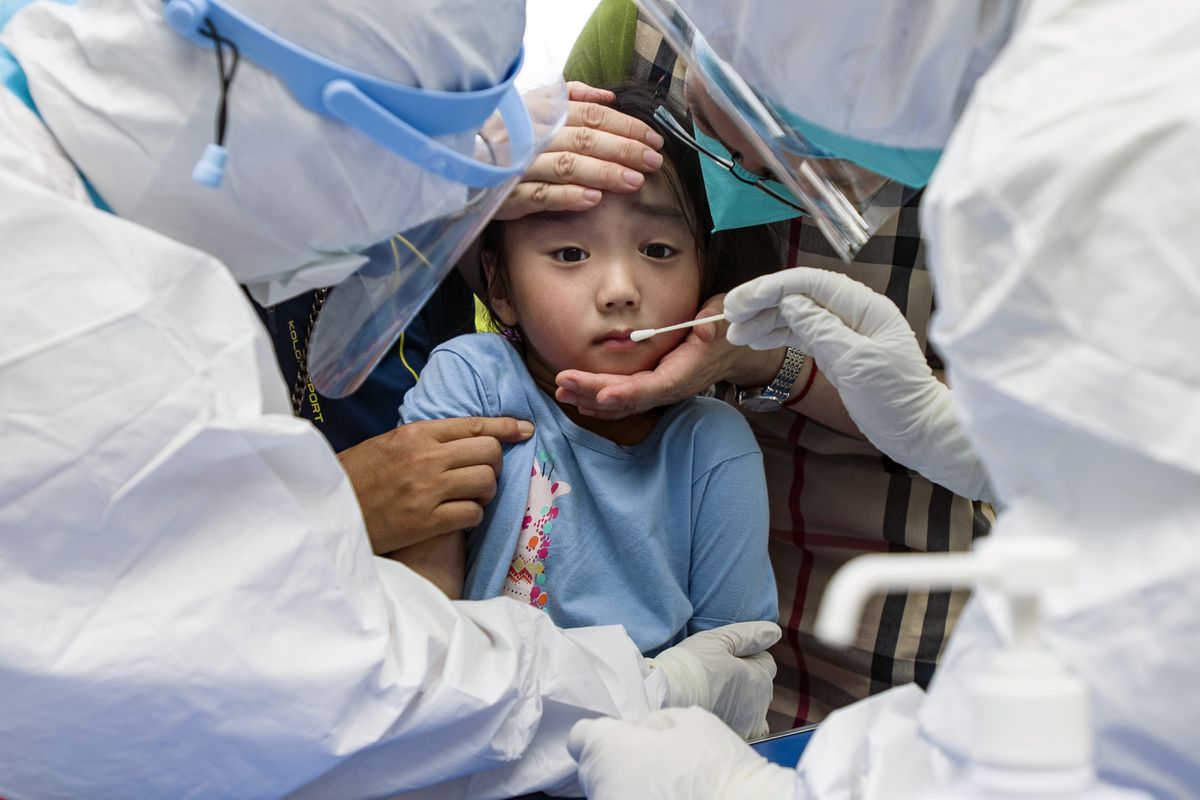 A panel of scientists denounces today in a letter published in Nature that the international investigation into the origin of the coronavirus pandemic is “paralyzed.” And the time to find conclusive evidence on where and how the virus that has killed more than 4.5 million people worldwide emerged “is running out,” they say.

“We want to make a call to action”, explains to this newspaper the Dutch virologist Marion Koopmans, member of the panel of scientists gathered by the World Health Organization (WHO) who traveled to China in January to clarify the origin of SARS-CoV -2. Koopmans signs the letter with the rest of his colleagues in which they demand that a second investigation be carried out as soon as possible in the Asian country that allows free access to scientists to all data on the first cases detected in this country and also the study from farms where the pathogen was able to jump from animals to humans for the first time.

Almost two years later, the origin of the pandemic remains a mystery. It is unknown who was the zero patient, how long there have been specific infections between people and which animals acted as a vehicle for the first infections. This investigation has been weighed down since its inception by political controversy, the competing interests of the great powers, and the difficulties in conducting an exhaustive investigation. A few weeks ago, the Asian country flatly rejected a second international investigation on this matter.

The president of the United States, Joe Biden, just received today, precisely, the report that he commissioned from his intelligence services three months ago due to the apparent lack of transparency from China. The details of the document have not yet been released, but it appears that US espionage has not been able to determine how the pandemic began, according to reports. The New York Times.

WHO wants to create a new permanent panel of scientists to investigate the matter. Member States can propose their constituents. These can be those that were already part of the previous panel or others. It will be a process that all the organization’s countries must discuss and agree with China, which “probably” will take too long for the second investigation to arrive in time, warns Koopmans.

The final report of the WHO panel of scientists, released in March, received harsh criticism. It was also signed by Chinese researchers who carried out almost all the collection of samples and information. Several European countries and the United States denounced that China had withheld information during the four weeks in which Koopmans and the rest of the panel visited the markets of Wuhan – a possible first focus of the pandemic – and research centers from which the virus was able to escape. another possible start of the plague. The document did not provide conclusive data on where the coronavirus arose, but it did ensure that the animal origin was much more plausible.

“The Chinese team has not wanted to share raw data, for example on the 174 cases of infection detected in December 2019 [los primeros de los que hay constancia en teoría], because they say that there are problems of confidentiality of the patients “, write the scientists of the sanitary arm of United Nations in your letter, published in Nature. But experts now say that this is a secondary issue, because “it is clear” that those 174 cases were not the first, but that the coronavirus had probably been spreading for days or weeks before the authorities detected the first infections.

One of the most pressing targets for a second inspection is to go to farms where live wild animals were stored and then sold in markets in Wuhan and other cities, Koopmans says.

In June, a study warned that the illegal sale of live animals in Wuhan markets was widespread. Among them were mammals like the raccoon dog that can catch coronavirus and potentially pass it on to humans. “China has closed these farms, but we do not know what happened to the animals, if they are still alive or have been slaughtered,” warns Koopmans. “Nor do we know who works in these facilities and if we can find them to carry out the necessary tests,” he adds.

It is also urgent to look for antibodies against the coronavirus in banks with blood samples from inhabitants of the Hubei region, of which Wuhan is the capital, and other neighboring regions taken in the second half of 2019. “Normally the samples from these serological surveys are preserved two years and then they are destroyed. The deadline is about to expire ”, warns Koopmans.

Another objective would be to carry out a study of four new viruses isolated in March 2019 from the droppings of bats related to SARS-CoV-2. The samples came from just 400 specimens from a tiny area of ​​Yunnan, about 1,800 kilometers from Wuhan. Six miners from this exploitation suffered severe pneumonia after entering the mine to clean the feces of these animals. Three of them died. The Chinese health authorities then suspected that the culprit would be an unknown virus and organized scientific sampling campaigns. The lead author of the research, Australian virologist Edward Holmes, summed it up like this: this area is a “coronavirus soup” where the cause of a future pandemic could well be developing.

Holmes has just published together with other prestigious experts a review on the most probable origin of the pandemic. The work highlights that there is not a single proof that the virus came out of a laboratory, especially from the Wuhan Institute of Virology, where some bat coronaviruses were being studied. The work – which is based on the information on first infections from the UN report – shows that there are no cases registered in the laboratory facilities or its surroundings. Most of the earliest known infections between December 8-16, 2019 and beyond appeared near various Wuhan live animal markets. The work also emphasizes that there is no evidence that SARS-CoV-2 has been modified in a laboratory.

That work explains that “although the possibility of a laboratory escape cannot be completely ruled out and it may never be possible to do so, it is a highly unlikely hypothesis compared to the frequent contacts between wild animals and people that occur in this country. If the animal origin of this virus is not seriously investigated in a collaborative and exhaustive way, the world will remain vulnerable to future pandemics caused by these human activities ”. The clearest antecedent is the SARS virus that emerged in China in 2002 and killed nearly 800 people. Its most likely origin was civets and raccoons raised on farms to sell their skins.

“In this digital age in which almost everything is recorded, knowing the origin of the virus is only a matter of time. The only question is how long it will take to do it “

Alina Chan is one of the main defenders that the virus could leave a laboratory, a hypothesis that gives equal or more credibility than that of animal origin. In May, after the publication of the failed UN report, Chan signed a letter with other prestigious researchers attacking his colleagues and demanding “a real investigation” that takes all possibilities seriously.

Chan explains to this newspaper that the UN panel of scientists has lost its credibility and should not be part of a second investigation. He also questions its urgency to do it as soon as possible. “Contact tracing of the first cases, investigation of commercial distribution chains and serosurveys are an obvious priority,” he explains. “Does this panel really think that China, which two decades ago managed to determine the origin of the first SARS with much more limited technology, has not already done this type of research to protect its own national interests?”

This 32-year-old scientist who works at the prestigious Broad Institute of Harvard and MIT has parked her research in cell engineering and gene therapy to focus on the origin of SARS-CoV-2 and create a public website that follows its genetic evolution. “I’m sure there will be a serious investigation with or without the WHO,” he says. “In this digital age in which almost everything is recorded, knowing the origin of the virus is only a matter of time. The only question is how long it will take to do it, ”he adds.

No conclusions in the US report

Not even one of the most powerful intelligence services in the world has been able to conclusively point to an origin of the coronavirus that has shaken the world since the end of 2019. Almost at the same time as the letter published by ‘Nature’, the group named By the United States espionage agencies, it delivered to the president, Joe Biden, the report that he had commissioned them three months ago, just on May 25.
According to ‘The New York Times’ today, the work had not reached a definitive conclusion. To do this, agents have reviewed data from the virology laboratory in Wuhan, the city where the pandemic began. The underlying idea was to find evidence that SARS-CoV-2 originated, or at least escaped, from that institution. Already the previous US Administration, being President Donald Trump, had directed the spotlight in that direction, and Secretary of State Mike Pompeo had created an investigation group. But he also failed to confirm that theory.
The EU also supported this investigation, it is not known if because of loyalty to the North American ally or because there were doubts about it. For the other party involved, Chimn, it is more of a political issue than a scientific debate. Beijing, for its part, counterattacks and affirms that the virus could have originated in the United States, and that it arrived in the country by some visitors. / E. DE B.