The “scorers race” ignites early in the “League 21” 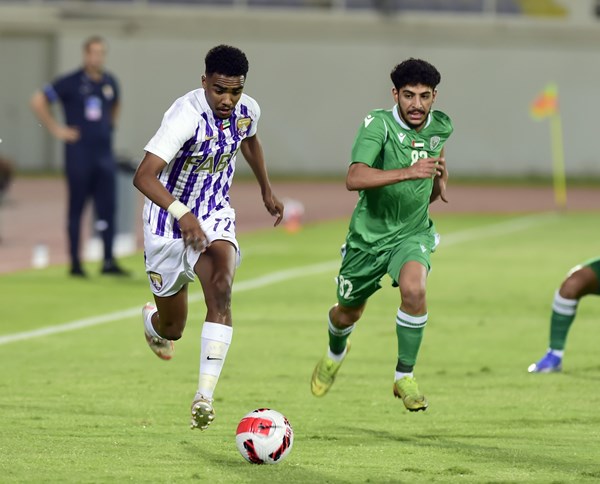 Mutasem Abdullah (Dubai)
The competition for the title of “Professional Under-21 League” began early, with the beginning of the first round, which witnessed the scoring of 19 goals, and the “duo” Saeed Al Kaabi, Sharjah striker, and Sudanese Mohamed Awad, Al Ain “resident” striker, topped the list, with two goals for each player at the end of the round. .
Saeed Al Kaabi scored a “double” in his team’s match against its host, Ittihad Kalba, 2-2, while Muhammad Awad contributed to the broad “leader” victory over his guest Khorfakkan 5-0, by scoring a “double” in the 25th and 75th minutes, respectively, to launch the competition for the title. The top scorer who was crowned last season was Sayed Khamis, the “resident” Bani Yas player, with 22 goals.
12 players were among the top scorers in the “League 21”, over the past seasons in professionalism, and Ali Eid, the player of Al Ain and Fujairah, is the only one who competed for the top scorer in two seasons, after winning the title in 2017-2018 with 20 goals, and ascending to the top of the list In the “cancelled” season 2019-2020, he scored 17 goals.
On the other hand, the name of the current Bani Yas striker Ahmed Shehda emerged, after he was crowned – as the first player from the category born in the state – with the title of top scorer in the 2018-2019 season with 18 goals, before the award went last season to his colleague Sayed Khamis, who wrote his name as the first “resident” player. He is the top scorer with 22 goals.
The start of the second round of the 21st League will witness the establishment of four matches tomorrow evening (Thursday), with Khorfakkan and Al-Wasl, Ajman and Al-Ahly youth, the Emirates and Al-Ain, Al-Jazira and the Kalba Union, to be completed next Friday evening with the confrontations of Bani Yas and Al-Wahda, Al-Uruba and Al-Nasr, Sharjah and Al-Dhafra, and it will start All matches are at 7:15 pm.
It will be a favorable opportunity for Al Ain to consolidate its current lead in the standings against its host “Al-Suqur”, after the latter’s loss in the first round against Al-Ahly Youth 0-3, while Khorfakkan and Al-Wasl raise the slogan of compensation, in light of the loss of “Al-Nours” in the first round against Al-Ain 0-5 , and “The Emperor” in front of his guest Bani Yas 0-2.
The match between Ajman and Al-Ahly youth is characterized by the nature of rivalry, after the “orange” won outside its bases over Al-Nasr 1-0 in the first round, and the “Knights” outperformed the “Falcons” by three clean, on the other hand, Al-Jazira and Al-Ittihad Kalba want to achieve the first victory, after a tie ” Abu Dhabi pride” with Al Dhafra 0-0 in the first round, and “Tigers” with Sharjah 2-2 in the same round.