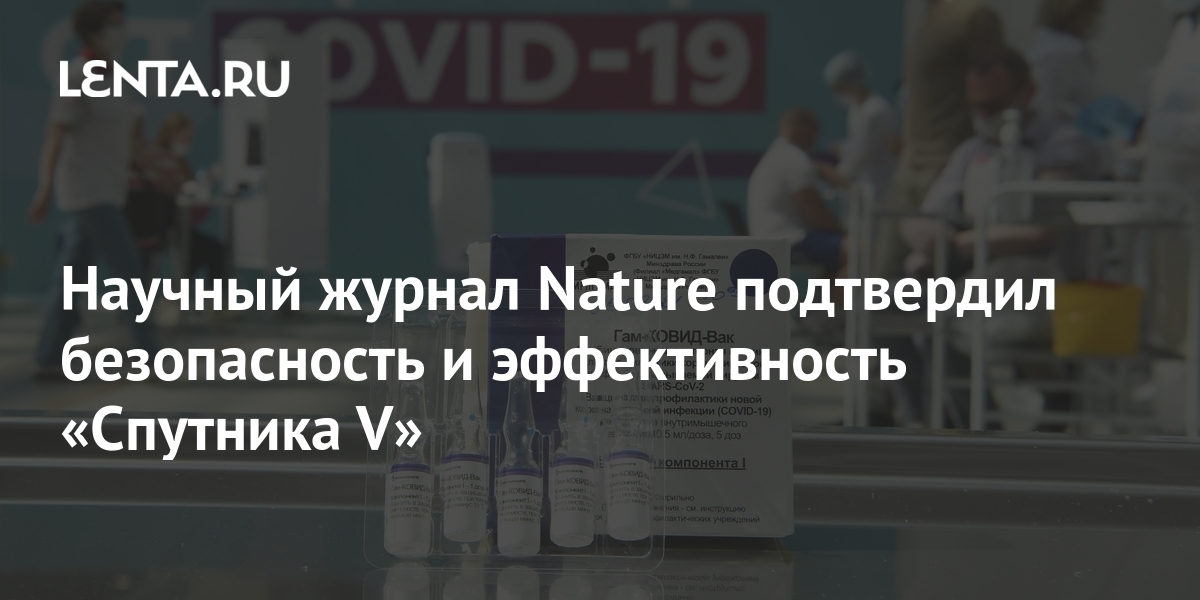 The scientific journal Nature has confirmed the effectiveness of the Russian vaccine against coronavirus “Sputnik V”. This is stated in the article on the drug.

protection from the severe form of COVID-19 gives “Sputnik V”

Nature notes that Sputnik V has been successfully used in 67 countries, and “data from Russia and many other countries now show that this vaccine is safe and effective.” In particular, the publication cites figures according to which the Russian drug is 91.6 percent effective in preventing COVID-19.

The author of the material points out that “Sputnik V” is similar in principle to similar vaccines from AstraZeneca and Johnson & Johnson. The drug works on the basis of an adenovirus, that is, it uses a constructed adenovirus as a mechanism for delivering the genetic code of the SARS-CoV-2 spike protein into human cells. But instead of using one engineered adenovirus, as in foreign vaccines, Sputnik V uses different adenoviruses, called rAd26 and rAd5, for the first and second doses, respectively.

The decision to use the two adenoviruses stems from their differing methods of introducing their genetic material into the host cell. Such a “double blow” increases the likelihood of successful delivery of the virus to where it should be, explained Dmitry Kulish, a biotechnology researcher from Skolkovo.

Now in Russia, in addition to Sputnik V, three more vaccines against coronavirus have been registered. “EpiVacCorona” from the Novosibirsk State Scientific Center of Virology and Biotechnology “Vector” was registered in Russia in October 2020. It was created on the basis of artificially synthesized fragments of the S-protein of the coronavirus. Later, on its basis, the updated “EpiVacCorona-N” was developed: it differs from the previous version in the technological features of production. The active ingredients are the same for both drugs.

The vaccine “KoviVac” appeared in the civil circulation in the capital at the beginning of the summer. According to the director general of the Chumakov Center, Aydar Ishmukhametov, immunity to coronavirus after vaccination lasts for about eight months.

Also in Russia there is a vaccination campaign with a single-component vaccine “Sputnik Light”. This drug is used to vaccinate migrant workers, and it can also be used to re-vaccinate citizens who have already been vaccinated against coronavirus.

Foreign vaccines are not yet supplied to Russia. At the same time, a number of foreign manufacturers have already either submitted relevant requests or are preparing to do so. In particular, Johnson & Johnson indicated that the launch of its vaccine on the Russian market is expected “after the completion of all the necessary stages, including the passage of local clinical trials and registration procedures.”

Nature notes that Russians are skeptical about vaccinations. The magazine cites a March poll in which 62 percent of citizens did not plan to be vaccinated. And as of the end of June, only about 15 percent of the Russian population received at least one dose of the drug.

As a result, a number of Russian regions have introduced compulsory vaccination of some employees from the trade and service sectors. So, in Moscow, 60 percent of employees are prescribed to be vaccinated against coronavirus: by July 15, they must receive the first component of the vaccine, and by August 15, the second. However, retail warned that it does not meet the deadline. Currently, in some companies, the number of vaccinated workers does not exceed 17 percent.

According to the latest survey, among the working population, 32 percent of those surveyed do not plan to get a vaccine at all, and 10 percent are ready to quit if the employer demands to undergo compulsory vaccination. Moreover, the most categorical in this matter were young employees (up to 24 years old): 38 percent of them are ready to lose their jobs if they are forced to vaccinate.

24 percent of Russians do not want to be vaccinated due to possible side effects, 15 percent do not trust Russian medicine, 13 percent said that vaccinated people can also get sick, another 9 percent are sure that the drug’s duration is too short, 7 percent are generally against any compulsion. Another 2 percent of respondents said that they are not afraid of getting sick, and if this happens, they will be able to cope on their own.

On June 30, Russian President Vladimir Putin urged fellow citizens to go to the vaccination station. He drew attention to the fact that there have always been opponents of vaccinations, “but we must listen not to people who understand little about this and use some rumors, but to specialists.”

Coronavirus is life-threatening, vaccination is not

The head of state also compared Russian and foreign vaccines. According to him, domestic drugs are high-tech, safe and effective. “As you can see, everything is in order and, thank God, we do not have such tragic situations after vaccinations as after the use of AstraZeneca, Pfizer and so on,” the president said.

Putin himself took root in “Sputnik V”. “The first hours I didn’t feel anything, after four hours sensitivity appeared at the injection site. After the second injection, the temperature is 37.2. I went to bed, woke up – 36.6, ”he shared.