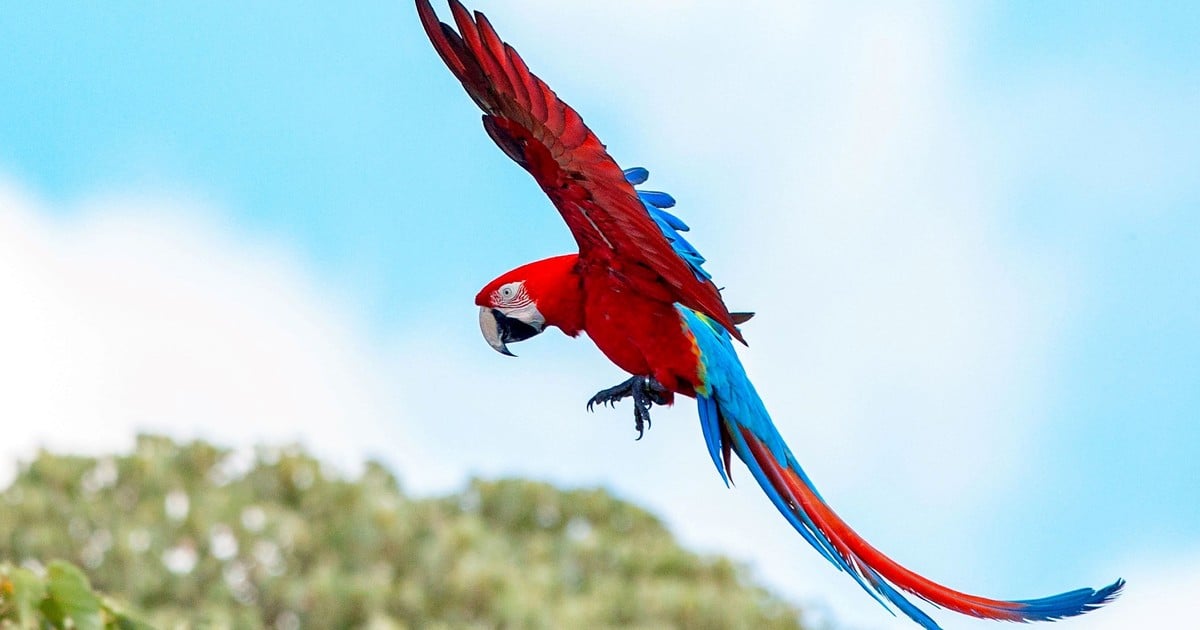 They came to Corrientes from different places. Some left captivity, had to change their diet and train their skills. In the last hours, after a long work, almost a score of scarlet macaws returned to fly through the Esteros del Iberá, an image that had not been recorded for more than 170 years.

The birds were reinserted into the area thanks to a program that brought together the Rewilding Argentina Foundation and the Government of Corrientes through the Aguará Wildlife Conservation Center. The initiative recently held the birth of the first two scarlet macaws in the wild.

The work to return the birds to their ecosystem was led by the biologist Talía Zamboni, from Rewilding Argentina, and the veterinarian from the Aguará Conservation Center, Jorge Gómez-

Before being released, the macaws had to adapt their diet and undergo flight training. Photo: Télam

The work of specialists includes from diet changes to flight training, since the birds that came to Corrientes come from different places: some arrived after being in captivity, while others arrived from the Buenos Aires Temaiken Biopark and the Buenos Aires Ecopark. All are followed up to study their adaptation.

Biologist Zamboni explained to Telam that “the records maintain that the scarlet macaws were seen for the last time, before becoming extinct, back 1850“.

“They disappeared because many took the species as a petThey also suffered persecution due to the traffic of feathers and another factor was the felling of trees, because they inhabit wooded areas and they were losing territory and disappearing, “he said.

He told that already there are 17 macaws that fly freeTwo of them a pair of “Tuco” and “Puré” pigeons, which were born in freedom and walk through the reserve area, together with their parents.

As part of the reintegration program, in October of last year two scarlet macaw chicks were born in the Iberá National Park. EFE

“Its habitat is the forests on the banks of the Paraná river,” the biologist explained, adding that “the experience of reintroduction of the species led to two birds being born in the wild.”

He rescued that macaws, which consume wild fruits, “help to regenerate native forests, when they evacuate the seeds.”

“This is a challenging project and a great achievement that these pigeons are flying. We look forward to this very much,” he proudly stated.

For his part, Jorge Gómez, reported that the birds normally “fly in the Cambiretá area in the vicinity of Ituzaingó, a property of the Iberá National Park, one of the portals of the estuaries.”

“It is an extinct series that is reintroduced, a project without antecedents, in some aspects it works by trial and error, for example, the first release was made in 2015, without training and was not very successful. We are learning from mistakes, “he said.

In this sense, he explained that “now we train them to develop their ability to fly and endurance and we begin with a change in diet, an adaptation, to what will be their food, which are native fruits.”

“The release is gradual and in combination with the diet,” remarked the veterinarian and added that “it is also carried out an anti-predatory training, so that they recognize the danger“.

After training the birds at the Aguará Center, Gómez explained that once they are released, they are monitored through collars that depend on an antenna and are viewed on foot or horseback, and on some occasions, by plane.

“Sometimes the people who see them send us photos or videos, because the antenna only records them in a radius of 8 kilometers and that is a great contribution,” he mentioned and added that red macaws are usually seen in the Yerbalito area. Villa Olivari and Loreto, to the northeast and center of Corrientes.

Snowboarding Rene Rinnekangas, who failed twice in the descent, was ninth in the big Air final

“Protecting Children from Abuse” at the “Himma Coffee” Forum