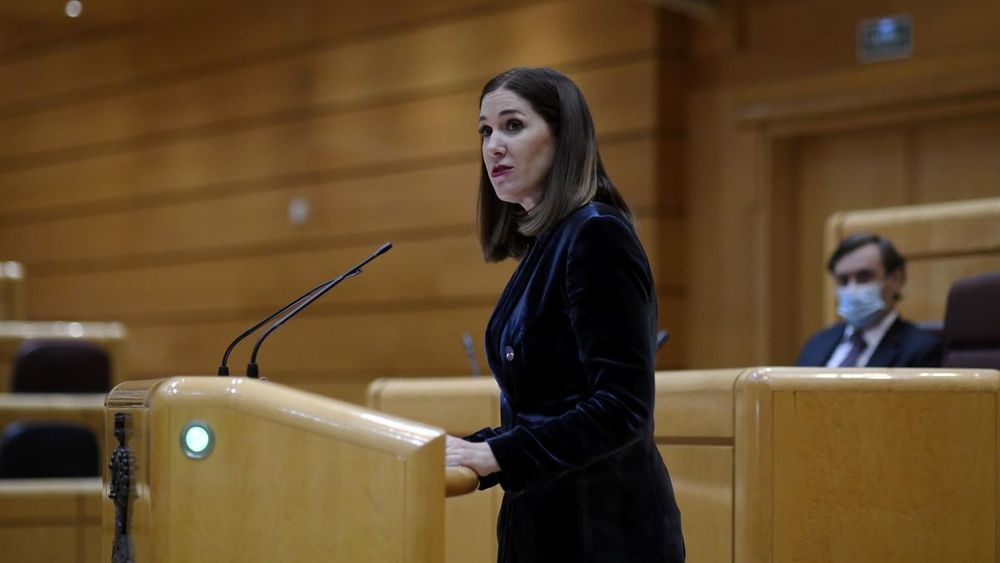 The deep crisis that Ciudadanos is going through has ended up breaking the parliamentary groups in Congress and the Senate. The party, in fact, will lose its own group in the upper house, because with the last two defections it remains below the six senators that are needed, when Ruth Goñi from Navarra leaves this Wednesday night, who does not renounce her minutes. In the lower house, the deputy Marta Martín announced her departure this Thursday morning, and there are already two resignations, after Pablo Cambronero’s on Wednesday. Unlike the deputy for Seville, she does deliver the minutes, so Cs will be able to keep nine deputies by replacing her with the lawyer Juan Ignacio López Bas, according to parliamentary sources. The management of Inés Arrimadas is shocked by a rupture that is not expected to stop being painful and that makes it very difficult for the brand to overcome the campaign of the next elections in Madrid, where survival is practically at stake.

It is a slow but incessant trickle of casualties. In Ciudadanos they believe that this cadence is orchestrated from the PP, so that every day there is a new news of abandonment and that the image is that of a decomposing party. The exits in the Senate – of two senators, and a third probably in the coming days – are all related to Fran Hervías, former secretary of Organization of the party with Albert Rivera, who has just signed for the PP, and some information suggests that His incorporation to the popular ones is to help them disintegrate Cs with signings in exchange for positions and salaries.

The latest dropouts will leave the party without its own group in the Senate. Senator Ruth Goñi communicated on Wednesday night on her social networks that she is leaving Cs but that she does not renounce her act, so she will join the Mixed Group. His departure, together with that of Senator Emilio Argüeso, who was expelled on Wednesday by Cs due to accusations of offering privileges to positions of Cs so that they go to the PP, leaves the formation with four senators, two less than the regulations of the Senate demands to have its own group. The group will be dissolved at the end of the session, that is, next June. This will mean a significant economic decline for the party, due to the subsidies that it will no longer receive, which amount to 387,600 euros per year.

In Congress, Arrimadas will retain nine deputies, because Marta Martín, the last one, has resigned from the act and can be replaced. Martín was the most veteran deputy of Cs, the only one who followed from the first parliamentary group of Cs that entered with Albert Rivera, and she was the expert on education issues. In the Madrid Assembly, deputy Juan Rubio has dropped the party, although he has alleged that he does so for personal reasons and has said that he will collaborate in the May regional campaign, as Telemadrid has advanced and has been confirmed by Europa Press.

Turn to the center

The desertions all have the same common element: the problem with the turn to the center of Inés Arrimadas, who tried to agree with the PSOE on a failed motion of censure in Murcia. A wide internal current considers that the formation, although it defines itself as centrist, should not reach agreements with the socialists, but only with the PP. “Citizens have changed their ideology,” says Goñi in his farewell letter. The party, considers the senator, “has buried its liberal values ​​to continue embracing sanchismo.”

Deputy Pablo Cambronero, who announced his departure this Wednesday, expresses himself in his farewell letter in very similar terms. The parliamentarian alludes in his letter to the Citizens of 2019, then led by Albert Rivera, who undertook a turn to the right approving a veto of any pact with the PSOE. Rivera ended up resigning after sinking from 57 to 10 deputies in the general elections in November of that year. “That party, led by Albert Rivera, promised citizens to get their support that they would never agree with Sánchez, partner of Podemos, ERC and Bildu,” emphasizes the deputy.

The spokesperson for the Cs executive, Edmundo Bal, has answered both of them this morning from Congress: “They are making it up. They are making excuses that are lies ”. “We have been consistent. We are the bridge between the PP and the PSOE, we have been demonstrating it since November 10; they have not understood anything. And it’s a shame ”, he complained. Bal has made a strong defense of the political center, which has as one of its main characteristics being able to agree to the left and right. “Those who are betting on one of the two Spains are not understanding what the political center is,” reflected Bal, who has also reaffirmed that Cs will stay the course: “We are on the right path and from here we are not going to move ”.

The Citizens’ leadership denounces an “offensive by the PP to try to destroy Cs” with all kinds of promises of positions and perks so that they can jump from one party to another. Bal has criticized what he has defined as the PP’s “open day for the defectors” and has defended that the popular ones do not represent a center project, although they claim as such. As an example of their differences, he has alluded to his party’s support for the euthanasia law, which the PP opposes.

The management endures the type and tries to achieve a closing of the ranks of those who remain. “The important thing is that what we keep we really believe. Just that ”, says a source close to the leader. Arrimadas has tried to turn Ciudadanos towards its vocation as an original center, after the right-wing of Rivera’s project in 2019, but an important part of the party is not willing to follow it on that path.

Honduras denies the “American Olympic” from the Tokyo Games!