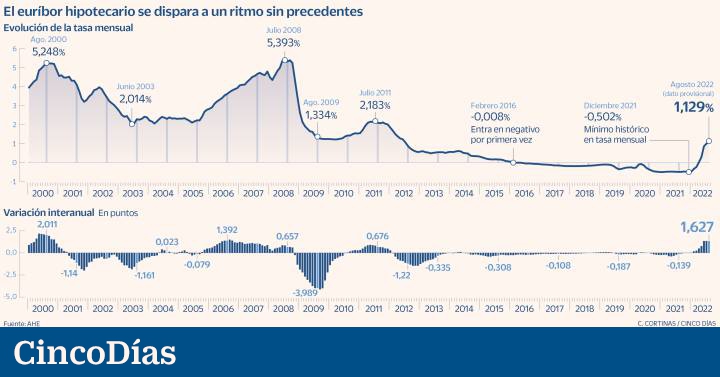 The mortgage Euribor flies. Its price is skyrocketing at a frantic pace in August and is going to leave a historical rise in mortgages that are reviewed with this month’s data. The 12-month Euribor – dominant reference in variable-rate mortgages – rose yesterday to 1.398%, a new maximum since April 2012. And its explosive advance so far this month, from 0.921% at the end of July, leaves a provisional average for August of 1.129%.

The figure contrasts with the -0.498% monthly average of a year ago. In short, those who review their mortgage with the August Euribor will add 1,627 points to the interest they pay to the bank, in what will be the highest increase since October 2000 and the highest in the historical series of the index. If the review of the mortgage is semi-annual, the increase will be a record, of almost 1.5 points.

The calculation is provisional, with five sessions still to go before the end of August, but there is nothing to suggest that the Euribor will weaken in the little that remains of the month. Moreover, its rise is expected to continue in the coming months, as the ECB continues to raise interest rates. The acceleration of this index in August is due precisely to the perspective that has arisen in recent days that the ECB will raise rates again at the beginning of September by 50 basis points, in response to inflation that does not let up in the euro zone.

The jump in the interannual variation of the Euribor is going to exceed even that registered in 2006, when it touched 1.5 points and triggered the alarms in the domestic economies, shortly before the real estate bubble that was forged those years punctured.

The increase in mortgage payments that will leave the month of August is added to the general increase in the cost of living, with an inflation rate that reached 10.8% in July, a maximum of 1984. Although in absolute terms the payment of interest on mortgages is much lower than that of other episodes in the past in which the Euribor tightened sharply. In fact, in 2006 the 12-month Euribor ended the year at the edge of 4% and in 2000 it was trading above 5%.

Mortgage loans have never been as cheap as they were last year, before the ECB made the sharp turn in its monetary policy that has been imposed by the war in Ukraine and the outbreak of inflation. And although the long policy of zero interest rates has prompted banks to give priority to fixed rates –which have left a greater margin of business and account for 72.8% of new production–, the outstanding mortgage balance in Spain remains being mostly variable rate. According to data from the Spanish Mortgage Association (AHE), three quarters of mortgages are signed at variable interest at the end of 2021.

The perspective in the coming months is that the rise in the Euribor will continue to make all those mortgages more expensive – more than 4 million – in their annual review. At CaixaBank, the entity with the largest mortgage quota in the country, they expect the one-year Euribor to rise to 1.48% at the end of 2022 and 1.8% at the end of 2023, an estimate released in July – with the Euribor below 1% – and conservative compared to the consensus that now drives the market. In iAhorro they calculate that the Euribor could end this year around 1.9%, from -0.5% at the beginning of the year. “This is something totally anomalous for the Euribor, which normally does not usually vary by half a point in a full year,” they say.