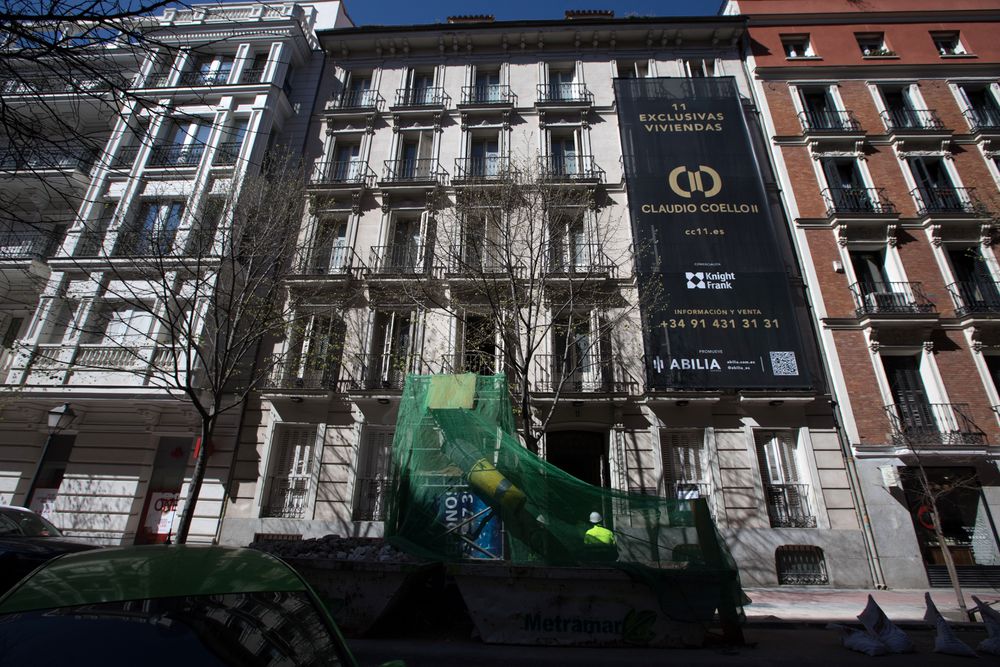 A new wave of Latin American fortunes will disembark throughout the year in the exclusive Salamanca district of Madrid to buy homes that do not fall below one million euros and that can reach up to 7.5 million that a penthouse costs on Recoletos street , number 8. Or the 9.1 million of the penthouse that is sold in General Oráa, 9.

They will follow the same roadmap as the great Venezuelan fortunes seven or eight years ago, when they colonized and transformed Madrid’s distinguished and very expensive Golden Mile, unleashing a clear calling effect in the area. “The best-known restaurant groups continue to open new restaurants and the best fashion firms fight to rent the best places in the area,” says Ignacio Calzada, director of the Promora office in Madrid Centro. They have also been the reason why some of the most expensive homes in Spain are sold here.

Real estate consultants hope that the Latin phenomenon will be repeated in intensity, but this time led by the Mexican buyer with high purchasing power. Although Colombians, Peruvians and Venezuelans will continue to be great clients. Their main motivation is the situation of political instability in their country and the financial fear of many families, who prefer to have their capital outside of Mexico. Also “due to the current scenario of low interest rates and the forecast of recovery in Spain”, adds Carlos Zamora, partner and director of residential at Knight Frank. In addition, Madrid is very competitive compared to other European capitals in the luxury residential area.

They do not take their eyes off, even remotely, the possible opportunities that may arise. “They are waiting to be able to travel to Spain when the health situation allows it. Even so, in recent months we have closed several operations by videoconference. Being near the Retiro park, surrounded by the capital’s most luxurious and exclusive fashion stores, jewelers, hairdressers and the most important banks make this neighborhood so attractive and in demand by this investor ”, argues Calzada. As long as they cannot move, “they buy through lawyers to whom they had left powers and trusted persons in Spain,” says Mercedes Pulido, director of sales at Lucas Fox Madrid. In fact, “the Latin American investor accounts for more than 70% of the sales of new construction in the Salamanca district”, completes Luis Valdés, director of Residential Sales Advisory at Colliers.

It is the advance party. As uncertainty dissipates and vaccination gains ground against the coronavirus, “investment activity is going to play a major role. There is greater liquidity than in 2008, so it is expected that investment in this new stage may be higher, although many investors are waiting to see how prices evolve during the second half of 2021 ”, believes Zamora. At the moment, the Golden Mile, which has the highest average value in the capital (about 9,000 euros per square meter), barely registered a decrease of 1% in 2020, according to Knight Frank. The adjustment is being more accused in second hand.

Rehabilitated flats in stately buildings, with generous dimensions – from 150 square meters – and the highest quality are their preferences, although the shortage of product has displaced part of the demand towards Chamberí, with much more supply and more affordable prices. “There are more than 30 rehabilitation projects in Chamberí at prices between 7,000 and 9,000 euros per square meter,” says Samuel Population, national director of Residential and Land at CBRE Spain.

Behind the hundreds of flats that Latin Americans have acquired in recent years there is a lot of investment funds or family office with Latin American capital, especially Venezuelan. This is the case of Lemon Prime, Grupo Impar or Gran Roque, the Capriles family company with nine super-luxury projects in Madrid. The large Latin American operations in the Salamanca district began in 2013. They took the opportunity to buy numerous residential buildings at very attractive prices for their subsequent rehabilitation. “Your optimal investment is to try to buy at 5,000 euros per square meter and sell at 10,000 euros,” says Pulido. And, sometimes, at 12,000 euros.

More than 500 million euros invested in the purchase and rehabilitation of residential buildings in the last seven years in the districts of Salamanca and Chamberí, calculates Samuel Population. “They decided to change the purchases in Miami and come to Madrid. There are groups that have come to invest 120 million euros in various buildings, ”says Mercedes Pulido. They were the drivers of new luxury real estate developments. This rain of millions contributed to the rise in prices in the area: “From 2015 to 2018 the impact per square meter rose between 20% and 30%, from 6,000 to 10,000 euros. The Latin American bought everything at whatever price it was, ”recalls Miguel Ángel Fernández, Engel & Völkers sales director in Salamanca.

Mexican capital is now the protagonist of the most notorious building purchase operations. The fund participated by Mexican capital Terralpa has been made with Marqués de Salamanca, 11. It has three other projects in Chamberí. They are also positioned, and not only in residential, Lasuto, the Díaz Estrada family and Abilia, one of the largest developers in Mexico. At the head of Abilia is María Asunción Aramburuzabala, the richest woman in Mexico according to the list of Forbes in 2019, which last year, in the midst of a pandemic, bought a building at Claudio Coello, 11, in the Salamanca district, from a group of investors including the Lemon Prime company, controlled by the Venezuelan brothers Manuel and Federico González Weil. The 11 luxury homes are already for sale. The two-bedroom apartments start at € 1.95 million. The jewel, the attic, costs 2.79 million. There are four homes sold, according to its website.

Some of the funds with Latin American capital, especially Venezuelan, that began to invest at the end of the financial crisis decided to put some of their assets up for sale in 2019 and not develop them, says Luis Valdés. “They tried to liquidate the least profitable projects before the pandemic in the face of a foreseeable change in the market cycle that had already been appreciating a lot in previous years, more than 10% in 2018,” explains Carlos Zamora. They did so by selling the building with the building license and the approved project.

Some continue to divest, although at the same time “they are analyzing other investment options,” says Population. “Some are being reserved for sale and others are becoming a residential product for rent,” adds Pulido.

Arteta: “I see Odegaard’s face, I talk to him and here he is happy”