The reopening of schools in Campeche: “We were urged to open, the children are lagging behind” 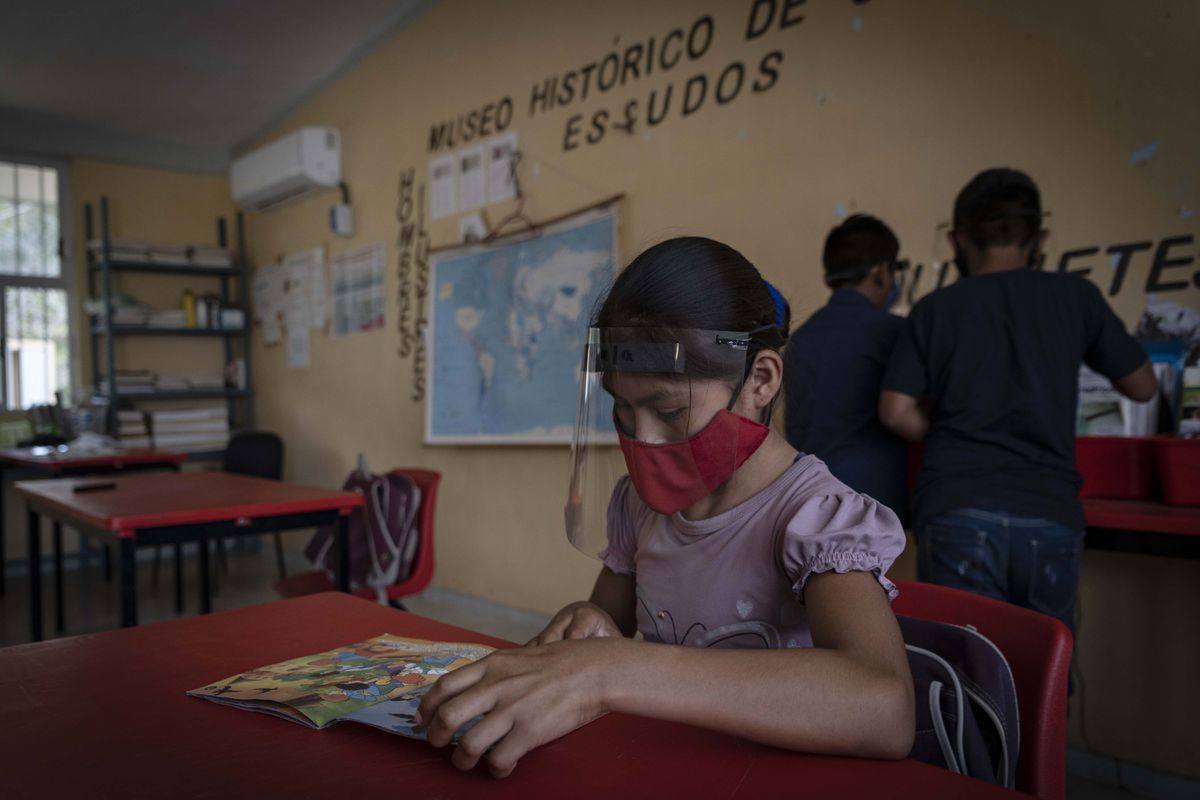 The State of Campeche has become this Monday the laboratory where the Mexican education authorities will measure the risks and advantages of opening schools throughout the country after a year of closure due to the covid-19 pandemic. In Campeche they have opened 137 schools in rural areas, with populations that do not exceed 500 inhabitants and where children do not have connectivity to follow the courses at a distance. One of these schools, the Emiliano Zapata, is located in the Pimental II community, belonging to the municipality of Candelaria, where about thirty children timidly waited for their reunion with their teachers. “I am very happy and excited after spending a year without working directly with the children, because it is important to attend to them in this face-to-face way,” says Yolanda Trujeque, 58 years old and 30 of them as a teacher.

If it is missing, in Pimentel there is a lack of everything: the families are poor, emigrants from other states who came to this region in search of land to farm or raise livestock. Here the internet is a luxury, television is rare and mobile connectivity is a fantasy: the telephones do not have a signal, which practically keeps its inhabitants isolated. Under a scorching sun and suffocating temperatures, the residents of this lost village, located in a municipality adjacent to Guatemala, prepared their children early and some dressed them on Sunday for what they consider a momentous event. There were no cases of covid patients here, so most do not see it as a risk. What does matter for them is that the children return to class and learn, because many of these adults are illiterate and others, due to the strenuous days in the fields, do not have time to dedicate to education.

Trujeque knows that well, also decked out this Monday for the occasion. The teacher shows concern about the delay she sees in her students due to the year that they have passed without stepping on the school. Although the teachers came once a week to drop off assignments, Trujeque says that was not enough to avoid the backlog they now have to deal with. “We were urged to open the school,” says the teacher during a break in her class, dedicated this morning to teaching students to form a prayer. They have on their desk a mountain of letters and Trujeque is indicating to them the sound of each one so that they can place them and form the sentence “I am happy to go back to school.” Some confuse the ‘c’ with the ‘s’; others can’t find the ‘r’ or don’t understand where the ‘e’ goes. “I find myself with a learning level of 65%, when by this date, which is about to end the school year, it should be 80% or 85%,” says the teacher. “These communities do not have resources and if we do not bring school notebooks to the children they do not learn and they cannot advance,” adds Trujeque.

Pimental was chosen by the education authorities of Campeche to inaugurate the return to face-to-face classes. The community was attended by Ricardo Koh Cambranis, the local Secretary of Education, who supervised the start of the day: the children entering in order, wearing face masks and applying antibacterial gel to their hands. Koh Cambranis says that in the previous months they made an assessment of the situation of the schools and invested in the ones they were chosen to open. In the Emiliano Zapata, the three rooms shine this morning from cleaning, there are fans on the ceiling to alleviate the death heat and new lamps to guarantee lighting in the afternoons. The bathrooms are newly renovated and, although toilet paper was lacking, there is a drinking fountain for the boys and hand soap in the two sinks in the center. “Everything was fine, there were no setbacks,” explains Koh Cambranis about the reopening of schools in the state.

The official says that one of the priority measures to guarantee the opening was the vaccination of the 5,072 teachers who work in the 137 schools that opened in this first stage. Now, he details, they will observe for three or four weeks how the return develops in these schools, to make the decision to open another 292 schools in towns with more than 2,000 inhabitants.

José Dionisio Cahuich is the director of the Pimentel school. This morning he is sweaty, after organizing the reopening, welcoming his boss Koh Cambranis, whose presence never ceases to amaze him – “A Secretary of Education had never come to this area,” he assures – and giving classes to his students, because he He is a fifth and sixth grade teacher. “The enthusiasm is great, we expected this reunion,” says the teacher, who earns a basic salary of 10,000 pesos a month (about $ 500). “The delay that we see is important and it is explained because it is not the same to give face-to-face classes than to expect children to learn at home and more in communities like this one,” he explains. Cahuich cites as an example of the tragedy the fact that at the beginning of the pandemic they sent the children, as recommended by the educational authorities, the tasks for WhatsApp and the parents were outraged, the normal thing in a community without a telephone signal, without Internet or other technologies. “The parents asked for the opening of the school. They told us to go back, that they were going to guarantee us food ”, he says.

Both Cahuich, Trujeque and Victor Soza, the three teachers of the school, are originally from other communities in Campeche and travel every Monday to spend the whole week with their students. They live in a wooden house built next to the school. The building so battered, sad and wrinkled by inclement weather, contrasts with the gleaming little school with three rooms and a sports field. The rehabilitation was done with funds from the program “The School is ours”From the Ministry of Public Education (SEP), which transfers the money to parents and teachers to be in charge of improving the conditions of the centers. “Before there was no electricity, the plumbing was broken, the bathrooms were damaged,” says Cahuich. Now the parents, who are fully involved in the maintenance of the building, are waiting for new funds to finish placing the roof of the court, where the children will exercise and enjoy their recess.

For parents like Nélida Hernández, it is a relief that the school reopens. She says she has had to overcome a “difficult” situation with Amando, her seven-year-old son who attends second grade. “He was not used to being locked up for so long, he became very hyperactive,” says the mother. Teaching at home also became difficult, especially since Nélida had to take care of her third daughter, still a baby. “The closing of the school did affect his learning. I tried to help him as much as I could, but I am not a teacher. Teachers have their methods ”, he explains. Her eldest daughter, Mitzy, is in the third year of high school and has been able to continue her studies at a distance alone, a respite for her mother. “It is good that the school opens, so the children can go out, interact,” adds Nélida, but she does not hide her nerves: “I am afraid of the pandemic, because it has not happened here, there were no cases.”

First estimate: they foresee that the wheat area will remain at 6.5 million hectares

Best action plan for losing a ticket to Turkey revealed