Collapse in the hermitage of La Luz. / Firefighters of Murcia

The heavy rainfall recorded in the Region of Murcia since early Sunday morning has caused damage to some buildings, including the historic hermitage of La Luz, declared a Site of Cultural Interest and located in the district of Santo Ángel. Urbanism technicians from the Murcia City Council and the municipal archaeologist traveled to the complex, where part of a façade collapsed, after being affected by the rains, as well as the floor of the room where a kitchen is installed.

The hermitage of La Luz is one of the places with the longest history in the municipality, and for years there have been various warnings that it is in danger of ruin. The BIC includes the monastery and the nearby Iberian sanctuary of La Luz, dating from between the 3rd and 2nd centuries BC, the only part that has been recovered and converted into a museum. One of the first documents on the existence of the hermitage dates back to 1429.

The Huermur conservationist association recalled that “for years” it has denounced the “poor state of this protected Cultural Asset, requesting items in the municipal budgets to rehabilitate this property of the Murcia City Council.” He also accused the Consistory of having “denied” funds to rehabilitate the property “year after year”, “tortically rejecting our claims. The last time in plenary last Friday. 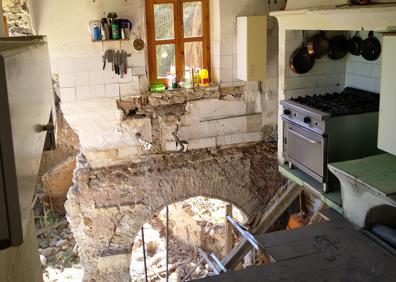 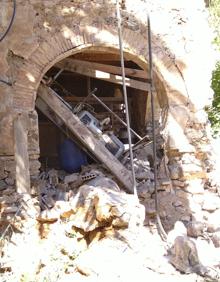 Huermur assured that he will file a complaint for these landslides in the Ministry of Culture and in the Murcia City Council, “since it is a protected monument in the PGOU and also included in the BIC de La Luz historical site. Urgent measures will also be requested.

Damages in the municipality of Murcia

Among other incidents recorded in the municipality of Murcia, there are numerous damages in the district of Javalí Viejo, where a man died, blackouts in lighting, flooded streets that require bilge of water, cleaning of mud, removal of branches, as well as various damage to local and municipal buildings. Likewise, the Local Police keeps the tunnel and the Rincón del Gallego de Beniaján and the Torre Abellán de Avileses road closed.

Murcia firefighters also had to clean up a cornice in the vicinity of the church of San Bartolomé, in Murcia, due to the risk of collapse. There were also falls of power poles in El Puntal, in the urbanization of Los Rectores, in Espinardo and in the Murcian district of Puente Tocinos. On the other hand, the fall of a palm tree in Espinardo caused cables to come down on the Torre Falcó road.

Murcia City Council continues to act with cleaning teams in various streets of districts to drain water, such as Javalí Nuevo, Espinardo, Guadalupe, Los Ramos, Alquerías, Los Garres, Algezares, La Alberca, Gea and Truyols and Sucina. In addition, incidents that are being recorded in districts such as Los Ramos are still being assessed.