The Pumas, historical: the seven got the bronze in Tokyo 2020 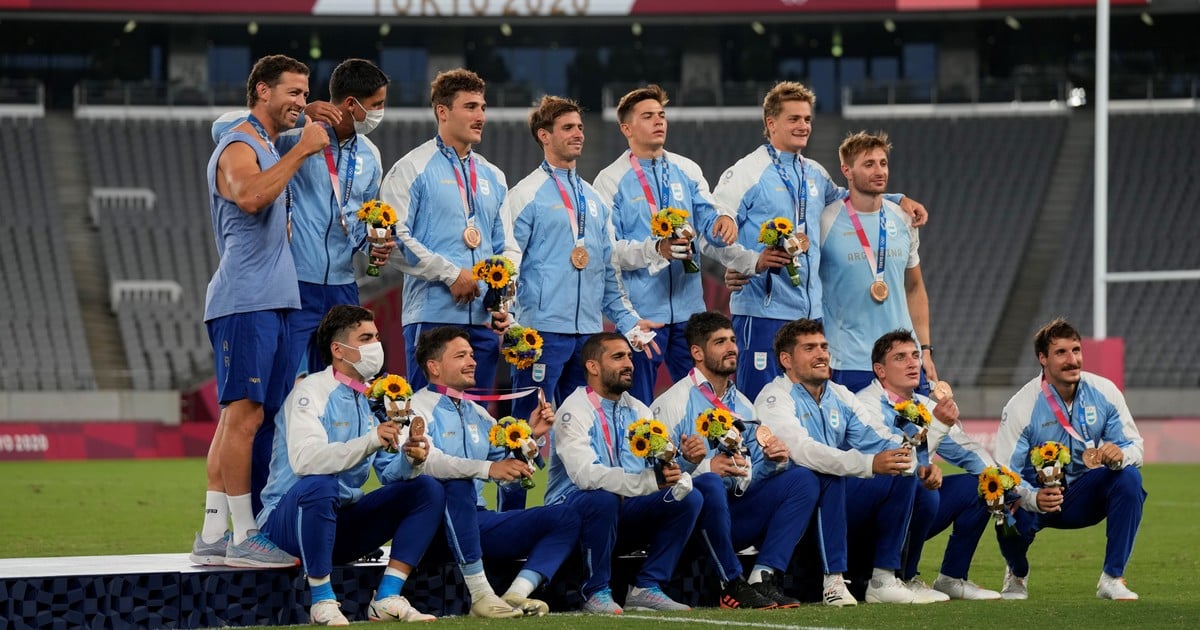 The Pumas wrote a page in the history of rugby in Tokyo 2020. After that elimination in the quarterfinals in Rio 2016 against Great Britain, in Tokyo 2020 they were made of bronze by winning 17-12 to that rival of the painful defeat.

It was a smart performance by a mental team that never lost the game plan despite the fatigue that the semi-final had demanded against Fiji, a world power that beat them 26-14 despite Argentina’s advantage at halftime.

But against Fiji, five hours before this match for the Olympic podium, the Argentines had run out of physique in the complement, which relegated them to play for the bronze medal versus Great Britain.

This time, the story was different. Although it had not started well because at the start Ben Harris reached the Argentine ingoal and Great Britain was 5-0 up. But the reaction of Los Pumas, who raised the same team in the semifinal, was not long in coming.

Lautaro Bazán Vera escaped on the left and tied the match, while before the end of the first half Marcos Moneta reappeared for his sixth try. This time, the Argentine striker stepped on and faked on the right to outwit the British defense and support the second try for Santiago Gómez Cora’s team. The difference, this time, was widened by Mare’s conversion and the selected one went to rest 12-5.

With the boys’ tries that were silver and gold at the Youth Olympic Games in Nanjing and Buenos Aires, respectively, Argentina took a necessary advantage but took a risk in the second half. Is that Great Britain recovered a ball inches from the ingoal and Ollie Lindsay Hague scored the try that equalized the score

But again Cougar courage and self-love appeared. The answer was an Ignacio Mendy escaping from Alex Davis to run down the left wing and sentenced the 17-12 to two minutes from the end that gave the bronze to rugby seven and the first medal to the Argentine delegation.

“We went through very ugly things, we went through many things to be here. It cannot be put into words, the immense joy cannot be described,” said Santiago Álvarez on TyC Sports moments after the victory.

The captain of Los Pumas 7, surviving that fall in the quarterfinals of Rio de Janeiro 2016, when the United Kingdom won 5-0 in overtime and eliminated the Albicelestes, remarked: “The medal belongs to everyone. No We play to win, we play for the one next door, for the one who is not there, for Negro (Gastón Revol, who has three games left on suspension), for Tute (Matías Osadczuk, who tore his ligaments), for Franco ( Sábato, reserve in Tokyo) and the players who stayed in Argentina.

“I feel blessed. Fulfilling a dream and doing what one loves is not easy. I have not slept or enjoyed for three days. Now I am happy. There is a lot of suffering and a lot of work in these boys, that’s why they get excited. These boys were one year locked up so as not to get infected. But they wanted this and when something is wanted, it is achieved “, summed up coach Santiago Gómez Cora, the father of the child who in Tokyo was awarded a medal.

A tough but logical defeat against Fiji

The team led by Santiago Gomez Cora He showed good intentions but was overtaken by a weight rival who is coming to be Olympic champion in Rio de Janeiro 2016 and who revalidated the title in Tokyo, by winning the duel for the gold medal against New Zealand 27-12.

In the previous one it was known that Fiji was a rival that could do a lot of damage when he had the ball and the game plan of Los Pumas 7 went through try to get it out and control its dynamics.

During some sections of the first half the national team succeeded and in others they did not, but they also managed to go to rest 14-12 up thanks to the tries Marcos Moneta, one of the tournament’s sensation players, and Ignacio Mendy who scored on time while playing “De Música Ligera” on the stadium speakers.

Already in the complement Los Pumas tried to do damage, but in the only dangerous play that they generated near the rival ingoal the referee charged them Penalty against for offside.

A couple of plays later the Fijians capitalized on a good backlash that Wainiqolo turned into try under the ax and that turned Tuwai to come forward 19-14.

Fiji was too much for Los Pumas, who were left without legs in the complement. AFP photo

By that time the national team looked lacking rhythm and with great physical fatigue product of the wear and tear he made in the previous matches of the contest.

A later mistake in a line made it possible for Fiji to end up liquidating the shares through a world-class player such as it. Semi Radradra, who at sheer power scored the last try of the match, also converted by Tuwai.

Despite the defeat, Los Pumas had little time to mourn because they still had a chance to fight for a medal Against a rival who had just lost in the other semifinal against New Zealand by 29-7. And they do it like that.