The prosecutor launches his latest plea to convict police officer Chauvin of Floyd’s death: “Believe what your eyes saw. It was murder “ 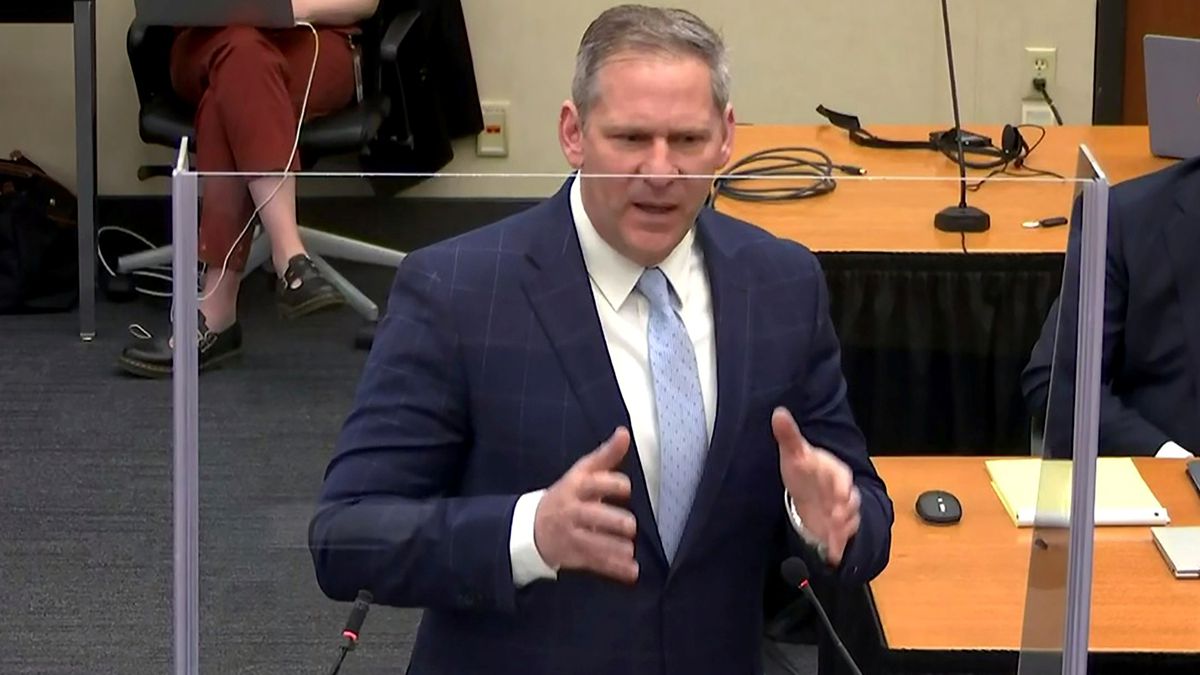 The trial against police officer Derek Chauvin for the death of African American George Floyd has ended this Monday and awaits a verdict in a climate of high tension in Minneapolis, with public schools closed as a precaution and the military of the National Guard deployed in the streets. In his final argument, prosecutor Steve Schleicher has asked the jury to believe “what their eyes saw” and “what they felt in their guts.” “This was not a police operation, it was murder,” he stressed. That deadly May 25 arrest, recorded on video, sparked the largest wave of anti-racism protests in 50 years, and the United States looks to this 6th Street courthouse as a place to deliver a message to the world.

“I can’t breathe.” George Floyd’s last words before he died, turned into a national cry against racism, these days appear everywhere one steps in Minneapolis, written on cars, on T-shirts, in windows or on the cash register of any store . This rich city in the State of Minnesota, an icy piece of the United States attached to Canada, has seen its history change with the death of Floyd and is now about to illuminate the final moral. Famous civil rights activists, such as the Reverend Jesse Jackson and Al Sharpton, have arrived in court amid light snowflakes to accompany the family on the final day of trial.

“Use common sense, believe what your eyes saw, you have seen what you have seen,” Schleicher, Minnesota’s special assistant prosecutor, told the jury on Monday. This process, he stressed, “is not against the police, it is a process in favor of the police.” Chauvin, 45, “betrayed his badge, abandoned his values ​​and his training and killed a man,” he added. Schleicher has spent about two hours in an exhibition in which he has tried to humanize Floyd, talk about his problems to emphasize that, although at first he did not collaborate with the agents who wanted to arrest him, “he was not a threat” and Such use of force was not justified.

The trial began three weeks ago with the viewing of Floyd’s arrest and death, a nine-minute, 29-second video in which a 46-year-old black man is seen lying on the ground, with the knee of a policeman in the neck, while claiming that he cannot breathe, he begs to be left, he ends up delirious and invokes his deceased mother to end up immobile, unconscious, dead, without the knee of the uniformed man moving from there. Two other officers (who are awaiting trial) help him retain him. The episode corresponds to May 25 of last year. That day, a patrol responded to a call from a store, Cup Foods, who reported that someone had paid them with a false $ 20 bill and brutally arrested Floyd while passers-by videotaped him and asked Chauvin to stop. Then he was silent and shortly after his heart stopped due to suffocation, according to the coroner and medical experts provided by the prosecution.

During three weeks of hearings, the defense attorney, Eric Nelson, has tried to counter the force of such images and tried to create a reasonable doubt in the jury, putting the accent on Floyd’s drug use to argue that he did not die of guilt. of an immobilization maneuver that, he maintains, was necessary because of the resistance he was putting up. The latter has been contested at trial by Minneapolis Police Chief Medaria Arradondo himself. In an unusual testimony, against a member of the body, Arradondo accused the agent of violating the rules of the department, because, although the immobilization maneuver with the knee in the neck is authorized, “once Floyd stopped resisting, [Chauvin] it should have stopped ”. The agent also breached his duty to provide medical help when he was shown unconscious.

“Those nine minutes and 29 seconds [del vídeo que ha dado la vuelta al mundo] they ignore the previous 16 minutes and 59 seconds, ”the defense attorney stressed on Monday. Nelson stressed that Floyd resisted early in the arrest: “Three police officers were unable to get him into the patrol car.”

Chauvin, who declined to testify, is charged with reckless manslaughter, second-degree murder (involves instant intent, but not premeditation), and third-degree murder (defined in Minnesota as that committed by someone who, while not seeking the objective of killing, causes death by acting dangerously, with a “depraved mentality” and without care for human life).

The jury, made up of a dozen men and women from the county, will now lock themselves in and isolate themselves in a hotel until they decide a verdict unanimously on each of those charges.

This is the trial of a man for the death of another man and that is what the jury must decide on, but something very similar to an episode in history weighs on his shoulders. The judge, Peter Cahill, reminded them that “their sole responsibility” is “to decide on factual issues.” Deliberations can take hours, days, or weeks. “Hope it will take a short time and get used to the idea that it will take a long time,” the judge warned last week. Outside, in the streets, in the concentrations and vigils that began that May 25 and are repeated these days, the sentence seems irrevocable. Also the conviction that the outcome of that cursed episode would have turned out differently if Floyd was a white man.