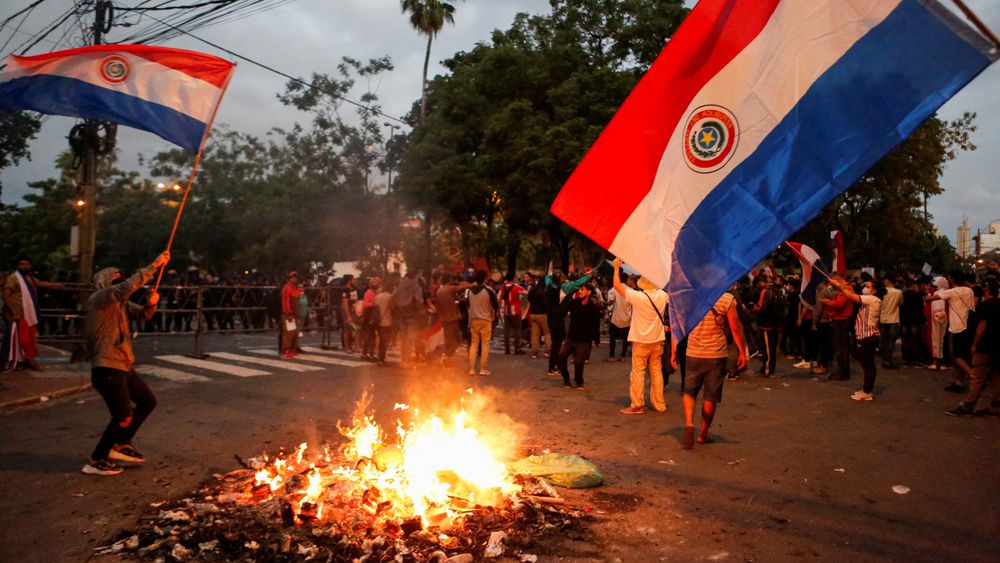 The majority in the Paraguayan Congress has rejected the request to impeach the president, Mario Abdo Benítez, for his management of the pandemic. The Paraguayan opposition, who asked to prosecute the president, have assured that the handling of the health crisis has been “corrupt and inoperative.”

The demonstrations against Mario Abdo Benítez, in power since August 2018, were concentrated outside the Paraguayan Congress this Wednesday. Police charged some protesters with rubber dances, tear gas and jets of water. The center of Asunción turned into an apocalypse again, seen a couple of weeks ago when the outbreak of the protests began. Broken shop windows, some looting and a score of arrested and injured was the balance of a night that the young protesters concluded with the burning of the headquarters of the National Republican Association (ANR), the official name of the Colorado Party, the conservative formation that governs Paraguay since 1954, with the exception of the progressive government of 2008-2012. The flames were doused by firefighters and police.

A country living in crisis

Despite the macroeconomic data that the Government disseminates and that international organizations accept without question, such as average and sustained GDP growth at 4% per year or inflation contained at 5%, the vast majority of the country, seven out of 10, they earn less than the minimum wage of two million guaraníes (one dollar is equivalent to 7,000 guaraníes) and 46% of the population lives from irregular jobs without registration in social security and therefore without medical insurance.

Before the covid-19 pandemic began, Paraguay already suffered two epidemics: dengue with more than 200,000 infections, and that even President Mario Abdo Benítez suffered in January 2020; and the other: corruption.

Paraguay is the country with the highest self-perception rate for corruption in South America after Venezuela, according to the annual study prepared by Transparency International. Since 1954, the country has been governed by the same political formation, the Colorado Party, except between 2008 and 2012, when the president was ex-bishop “of the poor” Fernando Lugo of the Guasu Front (left), who won surprisingly, allied with the traditional opposition Liberal Party (center-right). The Lugo government ended a year earlier than it should have been because it was subjected to a parliamentary trial that lasted 48 hours and was dismissed.

The health crisis already existed before covid-19. It is so common that public hospitals in Paraguay do not have medicine that many families, middle or lower class, have to resort to selling food known as “polladas” or “hamburgueseadas” to get resources.

“People who do not have medicine in hospitals are forced to get it in an illegal market dominated by the same government party,” Julio Benegas Vidallet, Paraguayan writer and journalist who has just published, tells EL PAÍS The Quarantine of Ñasaindy, a novel about the pandemic in Paraguay. “People are very sensitive, we see patients in intensive care and their families are looking for money so they don’t die. We all have a cousin, a sister or a nephew with the virus, something that two three months ago was just something of media terrorism ”, adds Benegas Vidallet.

Paraguay was one of the first countries in the Americas to close its borders, decree quarantines and cancel classes when the COVID-19 pandemic began. But there were more and more reports of drug diversion, intensive care beds at the limit and no prospect of massive arrival of vaccines for covid-19.

On the street and on social networks, scenes emerge such as that of an older man approaching the president in a public act to beg for medicine for his brother convalescing from covid-19, the parents of a girl who needs surgery protesting in front of the hospital or Hundreds of mothers asking for medical cannabis for their children’s epilepsy and degenerative diseases.