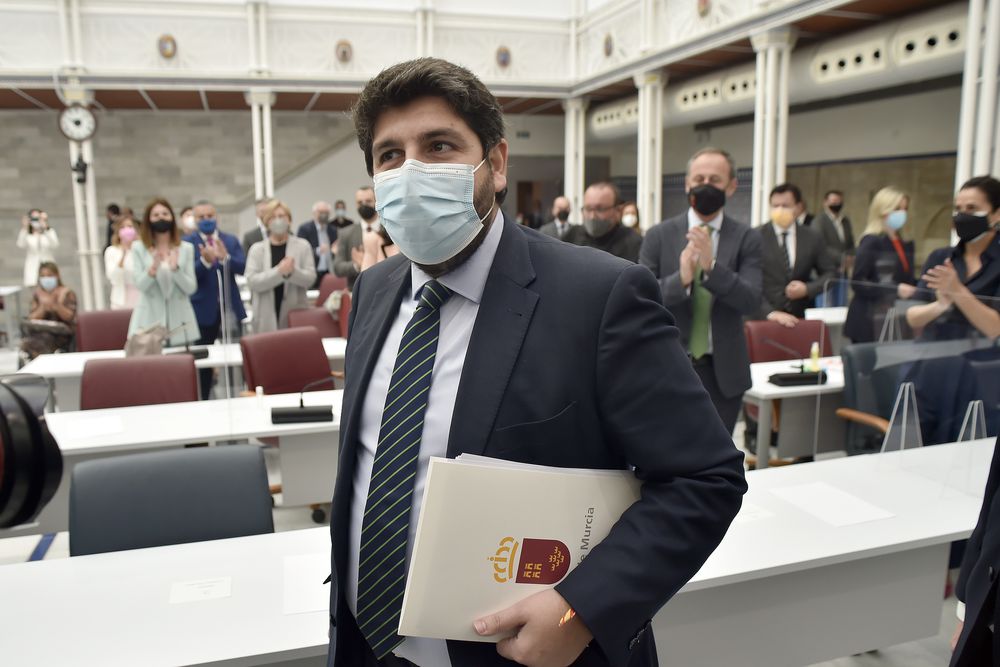 The PP will retain power in Murcia by collecting various wrecks. That of Citizens, caused by the popular ones themselves, when they managed to get three deputies of that formation to withdraw, last week, in exchange for positions in the Government, their signatures of the motion of censure that their party had agreed with the PSOE. The other shipwreck was earlier and left Vox, whose brand in the regional Assembly is kept by three parliamentarians expelled from the organization. These three deputies had in their hands the outcome of the political vaudeville that has shaken the region and, after several days of ambiguity, this Thursday they announced that they will vote against and thus prop up the Executive of popular and defectors. The price of that support is yet to be defined.

The butterfly that last week flapped in Murcia and completely dislodged national politics returned this Wednesday to its place of origin: the debate on the motion of censure that triggered everything. For three hours, in the regional Assembly, the word “corrupt” popped up in almost every sentence of every speech. And also “mafioso”, “Corleone”, “sausages”, “unworthy”, “sewers”, “pigsty”, “tricks”, “infamies” … Some and others accused themselves of having as their only political horizon “the armchairs”. The spokeswoman for United We Can, María Marín, revealed an endless inventory of insults that, according to her, have been dedicated these days to the three defectors of Ciudadanos. “Putrids” and “leeches” closed the list. The socialist Diego Conesa came to ugly the president, the popular Fernando López Miras: “You don’t know how to do it with a joint.” It was the softest thing he said.

The three defectors from Ciudadanos took their seats in the government area, just a few inches ahead of their former colleagues loyal to the motion, including the candidate for president, Ana Martínez Vidal. They were absent, yes, at the beginning of the intervention of the group’s spokesman, Juanjo Molina, and thus they were spared hearing how their co-religionist called them “scoundrels” until a few days ago. When López Miras entered the room, the defectors stood up with the entire PP to applaud the president in a kind of parade.

Martínez Vidal and the socialist Conesa had signed shortly before in front of the cameras, in an Assembly room, the document of their government program. Not even they themselves transmitted too much faith in being able to turn around the PP’s maneuver to neutralize the motion. But there was the question of Vox. And López Miras himself had begun his speech in reply to the censorship with these somewhat mysterious words: “No one is aware that life can change in seconds.”

The situation of the three deputies elected by Vox well sums up Murcia’s political entanglements. Not only have they been expelled from the party, but they themselves have reported it to the Public Prosecutor’s Office for a case of alleged fraudulent affiliation. Even so, they keep the name in the parliamentary group. Its leader, Juan José Liarte, is a martial arts specialist who started his speech by explaining what the Chinese equivalent of the word “crisis” is. Although López Miras had urged him to join his “freedom project”, Liarte gave no clues about the orientation of his vote. More than the rest of the spokesmen, he dedicated himself to replying to the radio host Federico Jiménez Losantos, who, according to him, this morning had called them “gulfs”. Then he appeared before the press and, after explaining himself, asked: “Is that clear, isn’t it?” As clear as the Chinese alphabet. On the one hand he admitted his greater ideological proximity to the PP and on the other he assured that “general interests are above sympathies”. When asked if he was negotiating with PSOE and Ciudadanos, a new request: “If they deny it, I’m not going to deny it.”

But President López Miras had already warned that life can change in a matter of seconds. They were more like minutes, which took Liarte to go out the door of the Assembly and confirm there what sources of his group had begun to spread moments before: that this Thursday they will vote against. Liarte influenced an idea that he had outlined before, his “illusion” with the plans of the PP secretary general, the Murcian Teodoro García Egea, to “reunify the center-right in all of Spain.” It remains to be seen what such an illusion will give of itself. The two parties deny that the deputies are going to join the PP. On the other hand, they do not rule out that they may later enter the Government with some of those armchairs that everyone denounces and few reject. Liarte referred rather to programmatic issues, such as recovering the idea of ​​parental veto in schools.

In a very tense debate, with a president of the Assembly who barely managed to contain the protests, the promoters of the motion defended that the “purchase” of the three deputies of Ciudadanos is the culmination of “26 years of corrupt governments” of the PP. “Corruption in crude and broadcast live throughout Spain,” claimed the socialist Conesa. The frustrated candidate for president also went on to denounce that the number of people who have skipped the vaccination list in the community already reaches 600. Martínez Vidal accused the popular ones of wanting to cover up the case because, according to her, among the favored there are many related to him.

In his reply, López Miras pointed to Madrid. The motion, he said, has been gestated in “the sewers on the left,” which to be more exact he placed in “the basements of La Moncloa.” The PP pointed to Conesa as the “only corrupt one” having been denounced for allegedly not processing the fine of an IU mayor when the current socialist leader was mayor of Alhama. Conesa announced that if the motion were successful, he would resign from the vice presidency agreed with Ciudadanos until the case was resolved. From the rostrum he displayed a sheaf of fines to show that he did pay them when he was mayor. Between these cross attacks the morning was consumed, with the word “corruption” hammering relentlessly on the seats of the Assembly.