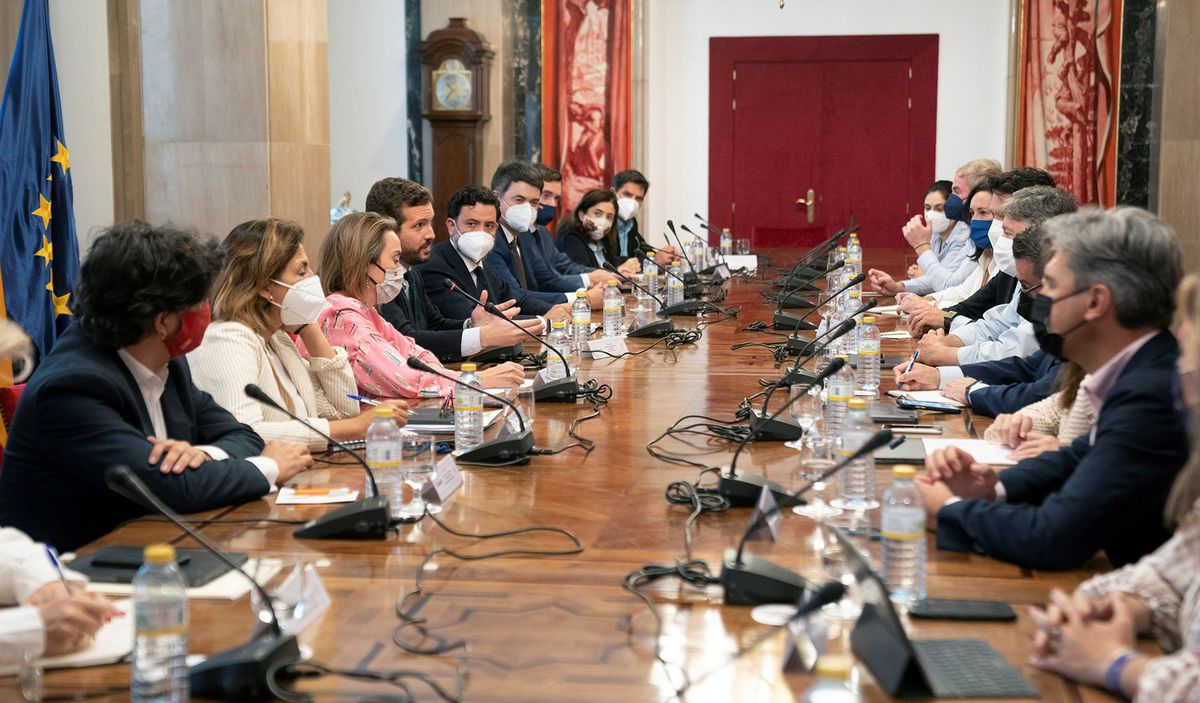 The distrust of the PP of Pablo Casado with President Pedro Sánchez is total and implies his refusal to negotiate the pending renewals of key constitutional bodies, such as the General Council of the Judiciary, the Court of Accounts, the vacancies of the Constitutional Court, the Defender of the Town and even to definitively close the directive structure of RTVE. In the PP they state that they have not yet maintained any type of contact with the new Minister of Justice, Pilar Llop, but sources from his leadership involved in the negotiations did not grant any credit to his generic offer of dialogue to unblock the negotiations because they interpret that already has ruled against the election of the members of the judicial branch by the judges themselves, which is now one of its non-negotiable conditions. At the top of the PP they do not see options to negotiate anything with Sánchez, whom they classify as “arrogant” and “liar.” And they open new fronts without any truce with the renewed Executive even in foreign policy, now on the occasion of the mobilizations in Cuba.

The general secretary of the PP, Teodoro García Egea, expressed it quite clearly this Tuesday in a conference on press and power in Aranda de Duero in which he attacked the Government of Sánchez with everything and dispatched the attempts to resume the contacts launched the previous day by several of the new ministers. For García Egea “without trust you cannot reach agreements”. The number two of the PP corroborated that “at this moment there is no trust” in the Executive and blamed the difficulty of reaching these pacts on the leadership style of the president, whom he accused of living “with lies” and thus trying to “shield himself against Justice”. It was not the only door slamming the negotiation that came from the ranks of the PP.

The popular ones pointed to the direct responsibility of the president in the failure of the conversations underway for months to review those key organs and tried to relate it to the government reshuffle, arguing that the obstacle had not been a specific minister until now. “It has never been a problem with a minister, it has always been a problem with the president and those partners who are pulling their strings from outside,” said the spokeswoman in Congress, Cuca Gamarra. The vice secretary of Popular Organization, Ana Beltrán, added: “The PP is still in the same place. State pacts and negotiations have always been there, but the problem is that Sánchez has always rejected them ”.

PP sources involved in that negotiation thus noted that “the only one who puts obstacles in the way is the president and the partners with whom he governs,” in this case alluding to allowing United We to be involved in the negotiation. The PP refuses and claims that they should be transactions between the two main parliamentary groups, necessary to reach the three-fifths (210) of the seats required to allow renewal in the Cortes. PSOE and Podemos argue that the reality of the current parliament, in which its coalition has 155 votes, is very different from the one that marked the distribution agreed in 2013 in favor of the PP and that nevertheless is still in force, for example in the body of power of the judges (with the mandate extended for two and a half years) or in the Court of Accounts (whose advisers end their nine years in office on July 23). The popular ones admit that many things have changed in recent years, but not only politically in Spain, and point out that surveillance notices came from Europe regarding possible government interference in justice.

Minister Pilar Llop did not delve into the transfer of powers on Monday about her offer for dialogue with the PP, but she did consider that challenge as something “essential”. In the PP they expect a next call from the minister, but they do not trust, and they emphasize that the president has not called Casado for months. The new spokeswoman for the Executive, Isabel Rodríguez, did want to launch this Tuesday a notice of reflection to the PP in his first appearance on the need not to establish partisan confrontations on important issues: “An intelligent opposition should know that there are agreements that compute electorally” .

Examination of the new ministers

The PP does not grant any day of truce to the renewed Executive of Pedro Sánchez. The leader, Pablo Casado, met yesterday with the heads of the commissions in Congress and then the request for an urgent appearance was announced, before the summer holidays, of all the ministers affected by this crisis, the seven new and the two who change portfolio, and the president himself, to “know the roadmap for the many pending problems.” The PP pulled the argument and its leaders repeated the slogan of the “Government in crisis”, “the end of the cycle” and the need for elections. And they emphasized that Podemos did not want to describe Cuba as a dictatorship and dismissed the response given by Foreign Affairs as soft.

For a year and a half, four of the 12 magistrates of the Constitutional Court have expired and should be replaced. The PP imposes its blocking minority in Congress —without its vote, the necessary three-fifths are not reached— to prevent the substitution. In this case, the balances in the Constitutional Court would remain intact: there would be five magistrates elected at the proposal of the PSOE and seven from the PP. But that situation will change shortly when the Government appoints the two magistrates that correspond to it and who replace the two that in its day the Executive of Mariano Rajoy appointed.

The Court of Accounts, the supervisory body, made up of seven councilors elected by the PP and now four by the PSOE, will have its nine-year mandate expired on July 23. The renewal would give the absolute majority to the left if the historical pattern of this organism is followed. The PP also blocks that change.