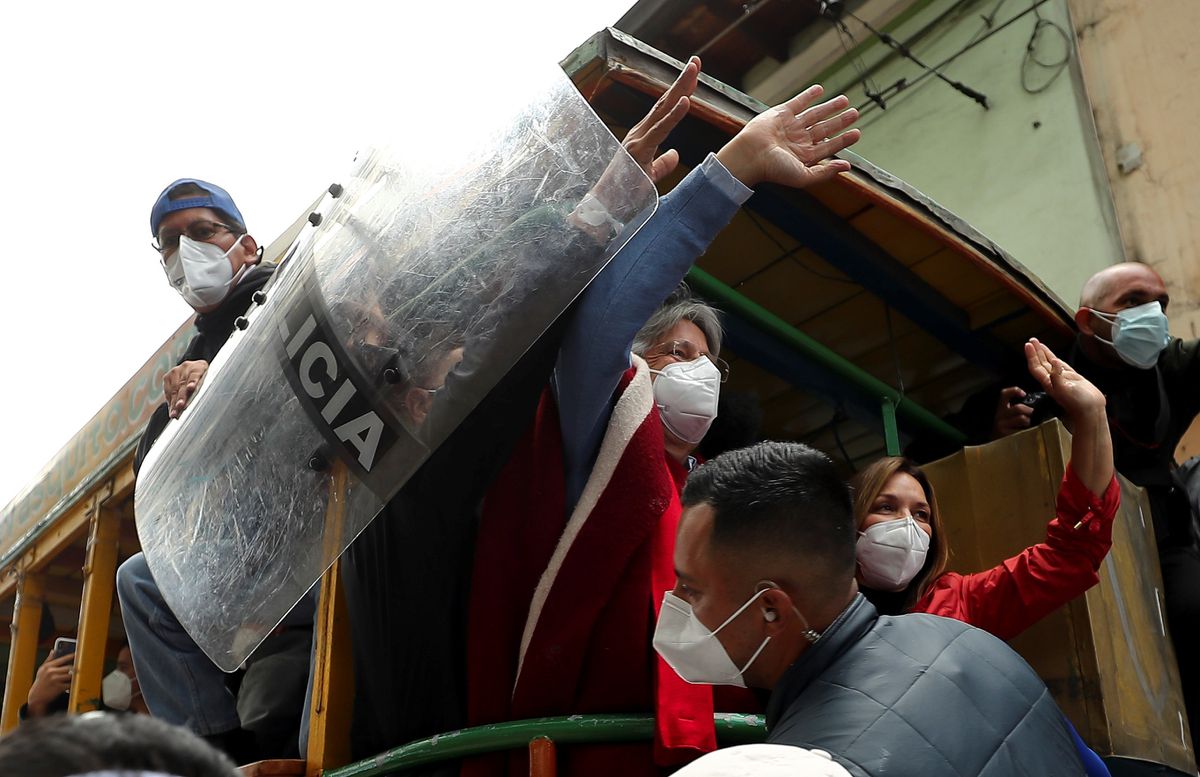 “Guillermo is coming, Guillermo is coming,” shouts a young man behind the wheel of a gigantic SUV. Sonia and Cristina Velázquez, mother and daughter, wave a blue and white flag. A downpour has just fallen and the women have barely managed to take refuge under a store canopy. They have been in that corner of the historic center of Quito for an hour, two blocks from the Palacio de Carondelet, the seat of the Government of Ecuador, and four from the bar that they opened ten years ago in that office district. This Wednesday they closed a little earlier than usual. They heard on the radio that the caravan of presidential candidate Guillermo Lasso would pass by to say goodbye to the capital before closing the campaign in Guayaquil. On Sunday, the conservative candidate will contest the presidency in the second round with Andrés Arauz, the man of Correísmo. “Arauz is the copy of Rafael Correa”; “Arauz wants to end dollarization and return to the sucre”; “Arauz will do fraud”; “Arauz will turn us into Venezuela.” Sonia and Cristina repeat like a mantra the same as the ten of Lasso’s followers who wait in that corner for the passage of the conservative candidate.

A few blocks away, in the square in front of Carondelet, a group of Arauz supporters wear orange T-shirts and distribute pamphlets and flags. A full-color flyer anticipates in blue letters: “Correa returns.” “The traitor lives there,” says Luis Kaiza, an 80-year-old retired mechanic who worked his entire life at the Ministry of Public Works. And it indicates the seat of the Government, so that it is clear that it refers to Lenín Moreno, the current president, Correa’s political dolphin and later an enemy. Beside her, María Quirsimba, a 60-year-old housewife, says she will vote for Arauz “because Lasso is the bank holiday,” as they call that day in March 1999 when hundreds of thousands of Ecuadorians lost all their savings. Lasso took office as economy minister in August, four months after the holiday, and his name has been forever associated with that fateful event.

“Guillermo is coming,” they shout again from another SUV. And this time it’s true. In the distance blue flags are seen and trumpet music is heard. “Come in a Chivas Quito”, celebrates Sonia, the owner of the bar that has closed before time. Chivas from Quito are trucks with open boxes on the sides that take people through the city to the rhythm of thunderous music. Lasso peeks out in a red poncho and waves a hand. Alba Vázquez is 74 years old and has a braid that reaches to the waist. Until the quarantine against the coronavirus, he sold candy on the street. “On March 26, 2020, my children forbade me to return to work,” he says, with a good memory. He has circumvented the confinement and has approached the corner of the historic center to greet Lasso. “We want him to win so that there is no more corruption, they stole everything,” he says, referring to the ten years of Rafael Correa’s government. From a truck they throw him a blue mask, a gift from his candidate.

Lasso’s caravan moves between street vendors and businesses that promote their products with speakers mounted on the sidewalk. Two indigenous women, the youngest with a child on her back, watch the passage of blue flags leaning against the wall. They sell apples and avocados for a dollar a bag. They are serious. Will they vote for Arauz? “The vote is secret,” they answer curtly. “But look, not a chinstrap [cubrebocas] They have given us nothing at all ”, the child’s mother is indignant.

In the square in front of Carondelet things have come to life. Lasso has already passed and the area is in the hands of the correistas. Polls anticipate a technical tie between Araúz and Lasso, but at that orange spot in the square, no one doubts who will win. “Araúz will be a good president, because he will do works,” says Marcos Picuasi, 47. He offers face masks for a dollar, without much success.

It is five in the afternoon and in an hour the imposing colonial center of Quito will be empty. The few who still work in the center will have to get home before eight o’clock at night, when the curfew will begin. Kaiza, the retired mechanic, will stay there as long as the police allow him because, he says, that square is his second home. “If we have escaped the bullets here,” he says. And he quickly gets lost in anecdotes of coups and revolutions. And it tells the story of the president who, in 1875, was hacked to death in that same place, victim of the soldier from whom the woman had robbed. And of the barbershop that works “of a lifetime” in front of the Carondelet Palace. “There Richard Nixon shaved,” he says. And of the red carpet that they put for official visits, between the Government House and the Savoy Hotel, a bicentennial building converted into offices. “There are no politicians left,” he immediately laments. “Now everyone steals, but Correa was a good person, I met him in the ministry.” On Sunday, Kaiza will vote for Arauz “for Correa to return.”

An old woman wears a dress for 54 years