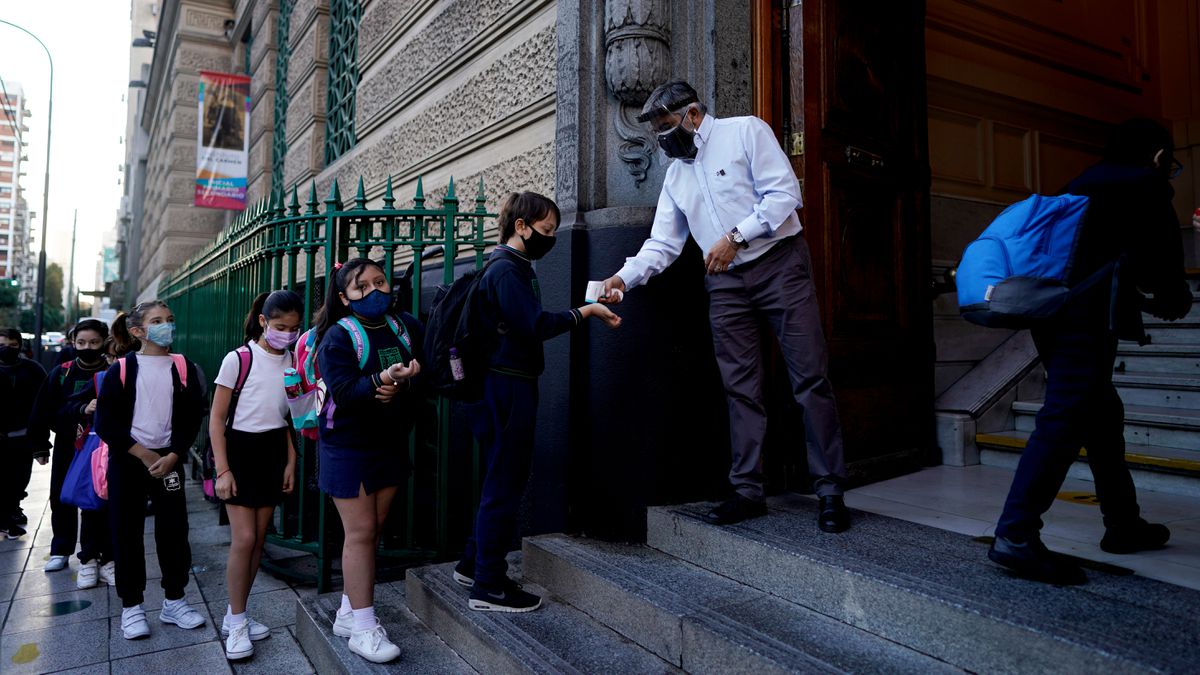 Argentina’s political polarization has moved to education. Many private schools in the city of Buenos Aires opened their doors today. Others will open tomorrow. In most of the public ones, they did not receive students because almost all the teaching staff joined the strike called after a court ruling enabled face-to-face classes this Sunday, which had returned to virtual mode for two weeks by presidential decree. The fight for education in the capital between the head of state of Argentina, the Peronist Alberto Fernández, and the mayor of Buenos Aires, Horacio Rodríguez Larreta, of the opposition Juntos por el Cambio, occurs in the middle of a second wave of covid- 19 with a record of cases and the legislative elections next October are on the horizon. The opposing positions are also replicated among families and educational institutions, mired in uncertainty.

“Hello Juli, do you know if we have classes today? I don’t think so… ”, a boy said to his classmate while his parents rang the bell of the Mariano Acha public school at nine in the morning, waiting for someone to give them information. The principal came out to explain what would arrive in the mail also minutes later: the teachers who were not on strike this Monday would give classes through Zoom. On Tuesday, in the absence of a contrary court ruling or other forceful measure, the school would reopen. Two blocks away, a private kindergarten welcomed babies after taking their temperatures, though nearly a third of those signed up were missing.

“It’s like being in the middle of a fight between parents separated: the two pulling to their side, without listening to each other, and the kids in the middle,” Julieta’s mother lamented back home, “If the schools close, let them close too the bars and restaurants, that they close everything, because it is half useless and I no longer know what to say to my daughter ”.

The number of positive cases for coronavirus has not stopped increasing since mid-March, especially in the metropolitan area of ​​Buenos Aires (Amba), the most densely populated area in the country, with more than three million children and adolescents of school age. On March 21, 8,160 new infections were registered. Three weeks later, the figure was already more than triple: 29,472. Faced with this escalation, the Fernández Executive announced on Wednesday new restrictions to stop the movement of people and reduce the epidemiological curve, including the suspension of face-to-face classes at the AMBA.

A day later, Rodríguez Larreta, from the party of former president Mauricio Macri, warned that he would bring that decision to justice, considering that schools are not a source of contagion. According to official data, between March 17 and April 12, 0.71% of the educational community was infected. Collectives of parents called cacerolazos, protests and hugs in front of the schools to demand that they remain open and celebrated the ruling issued last night by the Chamber of Appeals of the city of Buenos Aires. “It is a pride to be able to announce that tomorrow [por hoy, lunes] the schools are going to be open, “said the mayor of the capital on Sunday night after obtaining a favorable ruling.

Tomorrow the boys and girls of the City will be sitting in the classroom thanks to the efforts of a whole society committed to education and to the present and future of each one of them. It is an immense pride to see how all of you took this cause on your shoulders.

“What they did is a legal mess,” declared the Argentine president upon hearing the ruling. “Let’s not do politics with the pandemic. It has to do with health, not with an election, not with being nice to the electorate, “he added to the president on Monday in the middle of a ceremony on new investments in public health infrastructures and an extraordinary bonus for health personnel of 6,500 pesos ( 66 dollars).

Being present in schools may imply a low individual risk but a high collective risk, according to the epidemiological analysis. 👇 pic.twitter.com/WDeBUf2rsL

The Ministry of Health argues that the use of public transport has grown by 25% since the beginning of face-to-face classes, at the end of February, and that the number of cases in the school-age population group has increased above the epidemiological curve of the general population. “Being present in schools may imply a low individual risk, but a high collective risk, according to the epidemiological analysis”, highlights the health portfolio.

The dispute is in the hands of the courts. The Government has appealed the ruling before the Federal Justice, but the Supreme Court will have the last word. The highest Argentine court has declared itself competent this Monday and has given the Government five days to provide evidence on the need to temporarily suspend face-to-face classes. Until then, the controversy will remain open, with parents applauding the opening of schools and others gathering signatures to ask that their children can stay home and attend class virtually.

3.5 million heads of livestock in Abu Dhabi during 2020

Meron in Israel: More than 30 people die in mass panic at the Jewish festival