The pizzerias, in crisis due to the restrictions: the premises of La Americana on Corrientes avenue closed 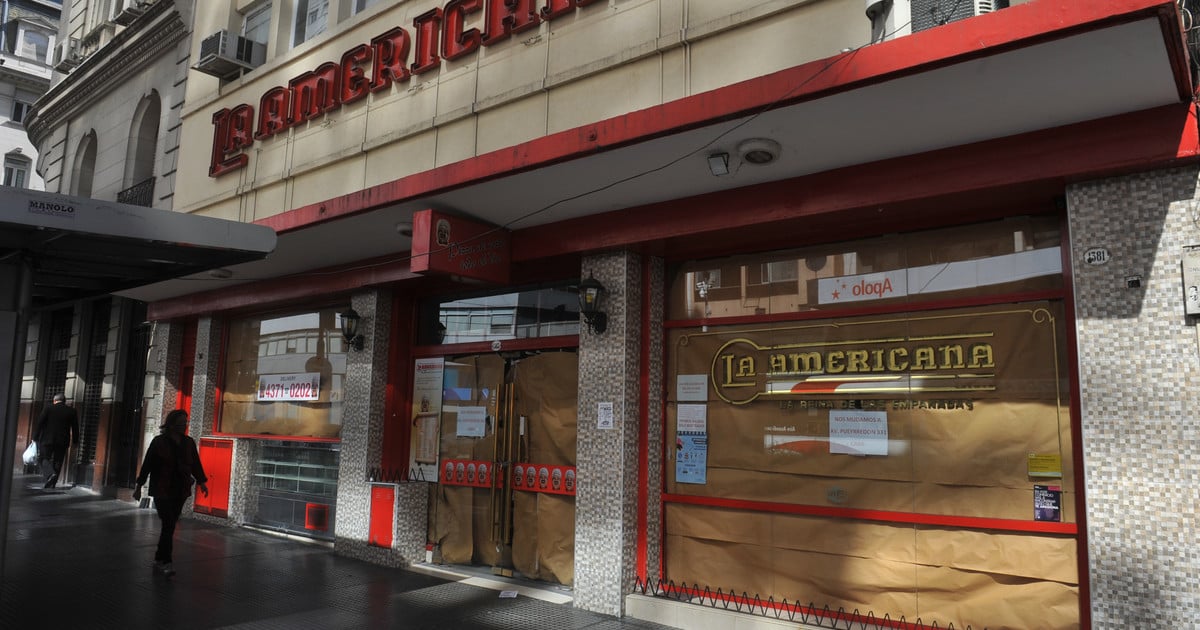 Downtown Buenos Aires languishes a little more every day. And now he just suffered another blow: The branch of La Americana on Corrientes Avenue closed. This house of empanadas and pizzas with 86 years of history continues in its premises in Callao 83 and in Rivadavia and Pueyrredón. But the loss of the street headquarters that once never slept symbolizes the bad moment that the pizzerias are happening, especially the central ones. A situation that is made worse by the recently imposed nighttime restrictions.

La Americana was born in Callao 83, with a narrow space that was annexed to the contiguous ones as it gained customers. Is that word of mouth confirmed what his motto still says: “The Queen of Empanadas”. Large, with a lot of filling. The one with spicy meat is one of the must-sees. The pizzas also have their own stamp.

On Currents 1383 added a large branch. It used to be crowded, but the pandemic came. Traders in the area say that not all owners of the premises adapted to the new reality of their tenants. And that is the problem that forced the closure of the premises that La Americana rented on this avenue known for its bookstores, theaters and pizzerias, but these days almost deserted.

How to pay the rent of a large premises in an avenue like Corrientes, today almost deserted? Photo Guillermo Rodríguez Adami

The rent to pay became increasingly unattainable and the owner decided move the bet to Rivadavia and Pueyrredón, an area with more circulation of people, so that sources of work are not lost.

“Today nobody wants to be on Corrientes Avenue, as emblematic as it is, “says Lorena Fernández, the president of the Association of Owners of Pizzerias and Empanadas Houses of the Argentine Republic (APPYCE).

The empanadas from La Americana, large and with a lot of filling. A classic with 86 years of history. Photo Rolando Andrade

For that Association, the recent decree that -in principle for 15 days- prevents gastronomic establishments from working with tables in their rooms and forces them to close at 19, “It is a lethal coup de grace” for pizzerias.

However, APPYCE does not call for disobedience. Instead, they appeal to the national government to review the restrictions. Because as they are raised, they warn, “they place in a situation of bankruptcy, closure and massive job destruction to most of the pizzerias and empanada houses. “

The other reason why they differ from other gastronomic, who called not to comply with the decree, is that in APPYCE they bet on dialogue. They say that restrictive measures have to be accompanied by a contingency plan, with financial aid and tax benefits to compensate.

Specifically, they request the return of the Production and Work Assistance program (ATP) to pay salaries, that the ABL and Gross Income exemption continue, zero-rate credits, VAT with a preferential rate and a tax moratorium, among others. measures. And they call a joint table between Nation, City and Province to analyze the gastronomic situation and find solutions.

“The decree takes us to the worst stage of 2020, but now without the help of the national and municipal state, savings have been exhausted, credit possibilities are exhausted, and we go into debt with the sole purpose of keeping our businesses open in accordance with security standards and protocols, ”Fernández describes in a APPYCE statement.

In dialogue with Clarion, Fernández explains that there are around 6,000 pizzerias throughout the country and that, of that total, between 800 and 1,000 are in the City of Buenos Aires. “Last year 15% of pizzerias closed. And this year it could close another 15%. “

According to Fernández, most of the pizzerias that closed at the beginning of the pandemic they were the ones that worked in rented premises, because their owners could not pay the rent or negotiate it. And he warns that, after the summer respite, now the same thing will happen again.

In addition to the fact that they cannot use the internal lounges, the obligation to close the public at 7pm deals a serious blow to the pizzerias.

“In our sector, about 70% of billing is done at night Fernández says. That they take the night out is the worst thing that can happen to us, especially at a time when we do not have ATP or help from anything. And we are still paying debts from 2020. “

In APPYCE, in addition, they ask thatthat the commissions of delivery companies are limited. And they explain that this system does not cover the drop in billing suffered by not being able to receive customers at night. “The delivery depends a lot on the area. In the neighborhoods it represents 30% of the turnover, but in the center and microcenter, 5% with the wind in favor”, says Fernández.

And he adds: “In addition, since we cannot have the room open, the premises that do not have space on the sidewalk, like The Immortals, they directly have to close. How do they keep up? “

From this Sunday, the subway ticket increases to $ 30 and tolls go up 25%

Crown Lidl will start selling corona home tests on Friday, which the expert considers to be very reliable – In these situations, a home test can be useful