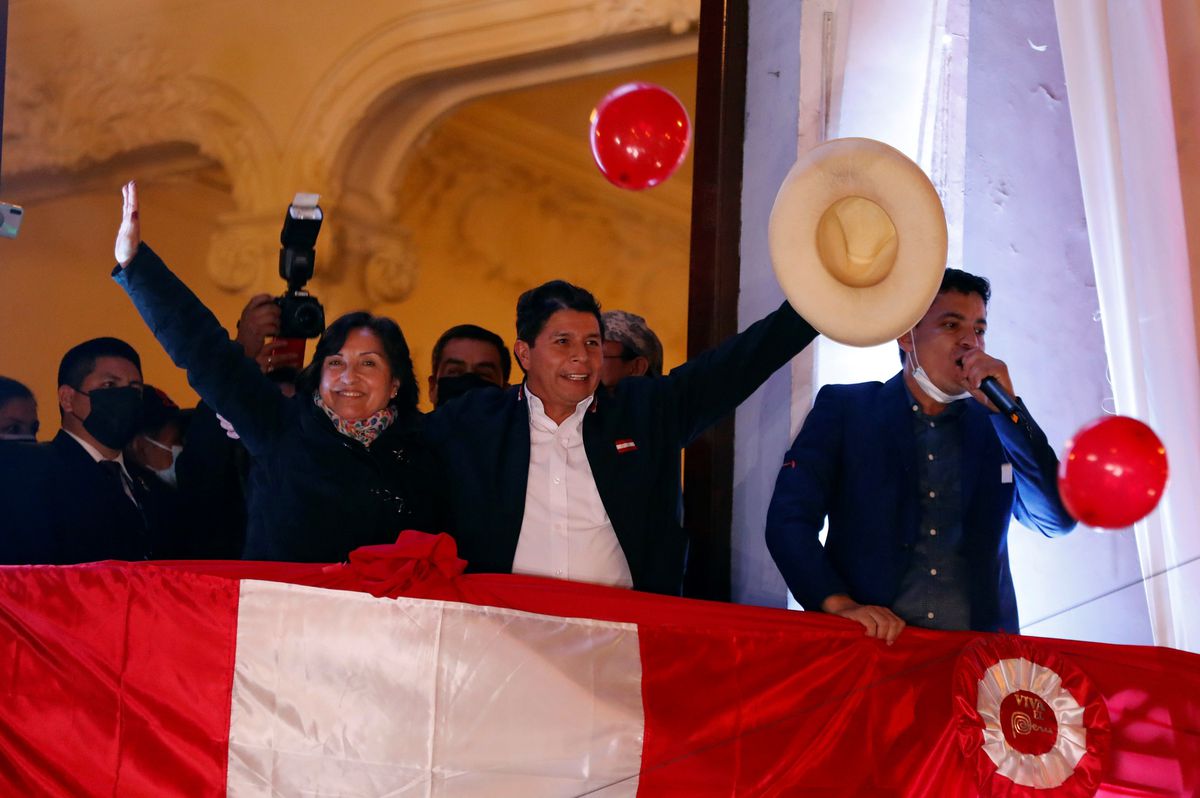 Peru finally has an elected president. The National Elections Jury (JNE) Pedro Castillo, a rural professor and left-wing union leader, was proclaimed the winner of the second round of elections on Monday in a zoom ceremony held five weeks after the official vote ended. During that period, the court analyzed and finally rejected more than 270 requests presented by the conservative candidate Keiko Fujimori to annul her opponent’s votes. According to the official results, the candidate from Peru Libre obtained 50.12% of the votes on June 6, compared to 49.87% for Fujimori, which represents a difference of just over 44,000 votes. Hours before Castillo’s proclamation, Fujimori announced that he recognized the results “because it is what the law and the Constitution mandate.”

After the proclamation, Castillo spoke to his followers at his party headquarters. “I invoke the leader of Fuerza Popular, Mrs. Fujimori, that we do not put up more barriers to move this country forward. Welcome to this space to make a Government of all Peruvians, of ‘all the bloods’, without any distinction ”, he said. The president-elect thus alluded to one of the novels by the anthropologist José María Arguedas, one of the intellectuals who in the 20th century represented in his works the injustices suffered by the Andean population.

In a message of less than 10 minutes, Castillo insisted on calls for unity and promised stability. “I have an open heart, there is no grudge. We are going to work together and reject anything that goes against democracy, we are going to reject any pretense of a model from another country, to guarantee legal and economic stability ”. And given the criticism that his proposal to convene a Constituent Assembly, one of his electoral promises, receives, he said that he will respect the institutions and the current Constitution “until the people decide to do so.”

Fujimori, who now must go to trial for alleged money laundering in the Odebrecht case, presented numerous challenges to votes and appeals to delay the proclamation of the Castle, while his supporters demanded in the streets to annul the ballot and call new elections. Therefore, in his statement, Fujimori has said that to defend themselves “against communism” his followers should not fall “into any type of violence.” “Now we have to face together a new very difficult stage because communism does not come to power to let it go, so they want to impose a new Constitution on us now. I am totally sure that Peruvians are not going to allow Pedro Castillo to turn Peru into Cuba or Venezuela, ”Fujimori said. “Just as I swore to accept the electoral results because that is what the Constitution mandates, today I swear to you that I am not going to give up, and I invite you to launch a true democratic defense. Peru needs all the social and political forces united in the great task of stopping communism. Our defense is just beginning, ”he added.

Since June 7, tens of thousands of Peruvians from rural jurisdictions and indigenous communities who voted for Castillo arrived in Lima to monitor the vote and held dozens of marches through the center of the capital, while Fujimori lawyers alleged fraud in the localities where the leftist candidate won en masse. Last Tuesday, the plenary session of the National Elections Jury finished resolving the Fujimori appeal requests and denied all, as they found no evidence of impersonation or forgery of the signatures of polling station members, as alleged by the candidate Fujimori.

In the six weeks since the ballot, Fujimori’s allies and followers held sit-ins outside the homes of the magistrates of the electoral court and the National Office of Electoral Processes to insist on their version of the fraud. In this period of waiting for the official proclamation, the former presidential candidates Julio Guzmán, George Forsyth, Ciro Gálvez and Daniel Salaverry met with the rural teacher as a sign that they recognized his victory, after the official scrutiny. His ally in the second round, former presidential candidate Verónika Mendoza, from the leftist Nuevo Perú, is another of the personalities he has been regularly dispatching with Castillo during the weeks of uncertainty.

Economist Pedro Francke, from the Nuevo Peru team, sounds like the new government’s possible economy minister, while doctor Hernando Cevallos, a former congressman from the leftist Frente Amplio, could be appointed as health minister. However, this Monday Castillo tweeted that after the proclamation as president-elect he would give details about his cabinet.

Since June, followers of Fujimori and a shock group from Fuerza Popular have carried out acts of vandalism in the center of Lima, even attempting to take over the Government Palace last Thursday and attacking the followers of Castillo who are camping in front of the electoral court. The group called La Resistencia, which since 2018 has been carrying out escraches against journalists and magistrates investigating Fuerza Popular, has participated in the front row in Keiko Fujimori’s demonstrations that insist on the version of “fraud”.

Castillo will take office on July 28, the day on which the term of interim president Francisco Sagasti expires and on which Peru commemorates the bicentennial of its independence. It is the first time in decades that the proclamation will take place within days of the change of command. Usually the name of the new president was announced by the JNE about four weeks before.