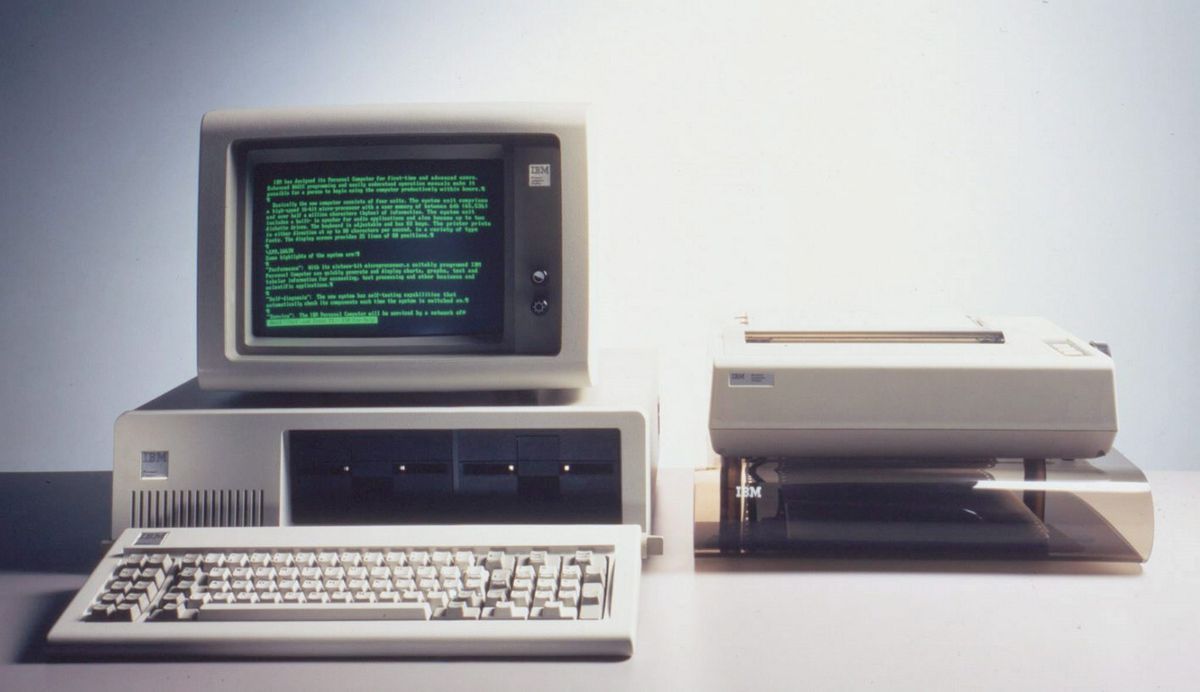 August 12, 1981. Great room of the luxurious Waldorf Astoria hotel in New York. IBM presentation. An unknown Don Estridge, head of development for IBM Entry Level Systems, announces the company’s personal computer: the 5150, for a price of $ 1,565. This Thursday marks the 40th anniversary of that press conference that completely revolutionized the PC industry. In the Big Apple, the home computing sector was beginning to be shaped and defined, despite the fact that almost no one anticipated the significance of the announcement at that time.

The 5150, dubbed the IBM PC, was by no means the first personal computer or the most advanced in terms of performance. In the seventies, Apple, Commodore and Atari made models of small size, powerful and manageable by anyone. But they were unable to make them the standard to emulate. José Luis Vázquez-Poletti, professor at the Faculty of Informatics at the Complutense University of Madrid, explains that IBM’s leap came from open architecture. He abandoned the prevailing idea of ​​making closed computers, produced solely within the company. “It published the design and software code for the model, which allowed other companies to design compatible products,” he says.

In the bowels of the 5150 we find Intel’s 8088 processor, Motorola’s 6845 video controller, Tandon’s floppy disk drive, Microsoft’s QDOS operating system — which eventually evolved into the well-known MS-DOS — and an Epson printer. From IBM it only had the monitor, the keyboard and the system unit, in charge of processing the instructions given by the user. “It was the first step for any person and manufacturer to decide what components to buy to build their own computer, which in the nineties were known as clones. It opened a market, which evolved very slowly, where all pockets had access to a PC, ”says Vázquez-Polleti.

Little by little, the IBM PC entered the houses, just as it did in its day with the car, the telephone or the television. It left behind the product image for universities, governments and organizations. Informatics was democratizing. In January 1983, the magazine Time it awarded him the title of machine of the year – instead of the typical character of the year. An indisputable success thanks to a change in mentality and the publication of a manual where you can find how the computer works. “It was huge. It had many, many pages. The user himself used it to identify problems and report them to IBM. People acted as technicians for the company, ”says Vázquez-Polleti.

Behind this revolution there is a less kind face. To understand it, it is time to move to 1980 at the IBM headquarters in Armonk, New York. According to the organization itself, from a meeting between its CEO, Frank Cary, and the director of Entry Level Systems, William C. Lowe, the 5150 project came out. Lowe claimed that in a year he was capable of manufacturing a PC. Cary’s response was blunt: “I believe you. Come back in two weeks with a proposal ”.

In a hurry, almost without testing the components, he assembled the prototype. And in just under a year, around April 1981, Lowe had delivered on his promise. “For a month, we met every morning to discuss what this machine had to do and then, in the afternoons, we worked on the morning’s decisions,” said Dave Bradley, who was in charge of writing the interface code, years later. But putting speed over quality, as well as opening up to third-party components, had a handful of repercussions in the industry.

When it turned to the QDOS operating system, Microsoft had barely reached the computing industry. This move led Bill Gates to license his software, allowing him to dominate the operating systems market. Anyone who made a PC had to pay to install it. If you look at the components, the programmers developed the software without checking its reliability and compatibility with other models, the key to this revolution. It generated some frustration and rejection towards computing due to the numerous errors that were found as soon as the computer was turned on. “It was a race against the clock. It is known that many of the validation processes were skipped. They told Estridge that he could go faster to get a product with which to compete in the market ”, Vázquez-Polleti ditches.

The industry was also shaken. The rest of the competitors wanted to make a cut beyond making products compatible with the IBM PC. Compaq, Dell or HP began a career of reverse engineering – the process of obtaining information from a product to determine what its components are and how they interact with each other – of core elements of the 5150. Thus they avoided paying user fees and enriching to the market leader. So much traffic ended with IBM suing a good part of these organizations, as reflected in the series Halt and Catch Fire.

All this new reality came to a company whose corporate culture was far from the general public. Its business model did not quite square with users outside its technological world. Thomas J. Watson himself, the architect of IBM’s success from the 1920s on, confessed that he could not conceive of a world with more than five computers. Despite this mindset, he turned an entire industry into what is now understood as PC. “You just have to see that everyone travels with their laptop and continues to do their business remotely on a computer,” sums up Ricardo Peña, professor in the department of computer systems at the Complutense University of Madrid.

However, the multinational quickly resumed its origins. He returned to his idea of ​​focusing on more expensive products, those destined for other companies. The IBM PC did not fall into this category. In no time, competitors snatched the leadership of personal computers from him. It gradually left the market until, in 2005, it sold this part of the business to the Chinese company Lenovo for 1.3 billion euros. “I do not know if the PC is dead, but it is not growing at the same rate as other technologies,” said Paul Bloom, head of telecommunications research at IBM in the late 2000s.

The pandemic has revived a sector that has fallen into disrepair in the last decade. Not dead, but eaten by phones and tablets. The current models have nothing to do with that 5150 that appeared for the first time at the Waldorf Astoria hotel. Even IBM doesn’t want to know anything about computer manufacturing. His is artificial intelligence, data science, cloud computing, telecommunications and the internet of things. As much as you want to ignore it, 40 years ago the era of the PC began and changed the course of computer science history.