The owner of the “invitation card” and ascended from the qualifiers to the final of “Dubai Tennis”! 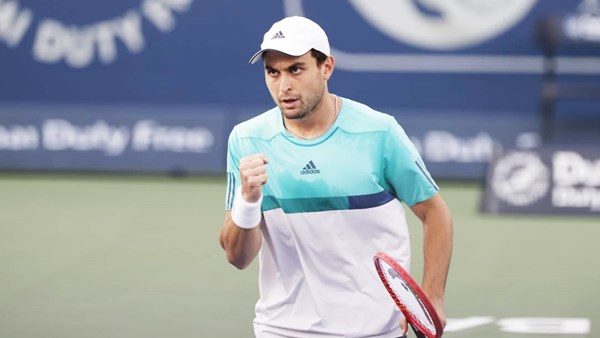 Russian Ruslan Karatsev and South African Lloyd Harris will meet in the final of the “29th edition” of the Dubai International Tennis Championships, at 7 pm tomorrow (Saturday), at the end of an exciting week of strong matches, with the participation of elite of the game stars in the world. The current session was full of surprises and presented many emerging talents, which makes the final match the focus of attention of all fans of “yellow football”, as the final match combines a player participating with an invitation card, and another from the qualifiers.
In the run-up to the semi-finals, the first match lasted two hours and 41 minutes, after which South African Lloyd Harris, ranked 81 in the world, and who was promoted from the preliminary round of the tournament, achieved a resounding surprise, beating Canadian Denis Shapovalov, ranked 11th in the world, 6-7 6-4 7-6
Despite losing the first group, and suffering a thigh injury, the doctor’s intervention was required to provide treatment, but Harris did not give up, turning the tables on his opponent in the two groups, to snatch the pass to the final match.
In the second match, which was a purely Russian confrontation, world number 42 Ruslan Karatsev, the participant by invitation, succeeded in defeating his countryman Andrei Rublev, ranked 9 in the world, 6-2, 4-6, 6-4.

United States Joe Biden crashes as he boarded an Air Force One plane, the White House said the president was doing well

Sergio Berni will leave when Cristina Kirchner defines him: the mystery is how long will Sabina Frederic hold out