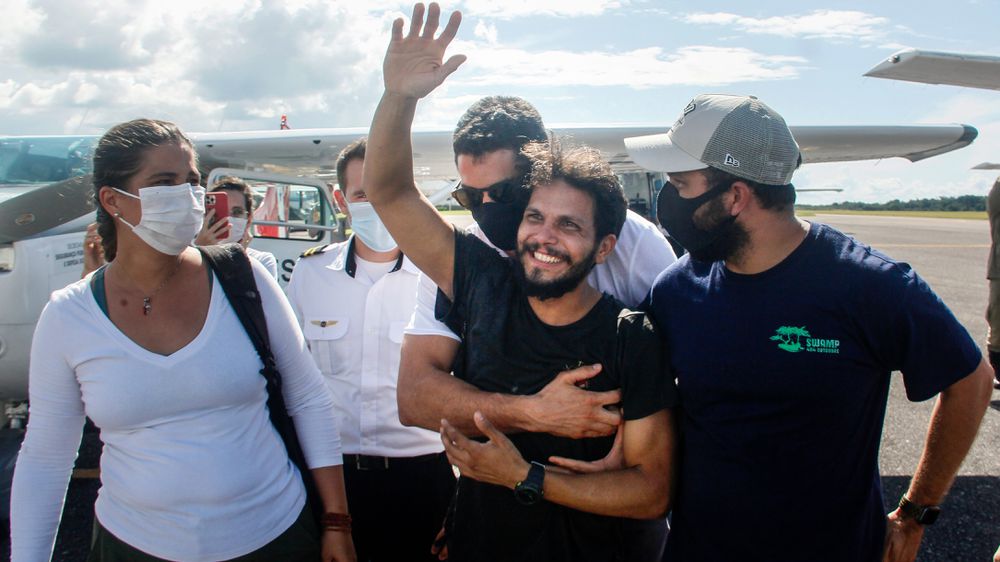 He managed to launch an SOS over the radio. The 36-year-old pilot Antonio Sena disappeared on January 28 in the remotest part of the Brazilian Amazon while transporting supplies to an illegal mine. The sole engine of his plane suddenly stopped. Focused on landing, he mentally reviewed the flight simulator hours. “Thank God, I found a small valley,” he explained by phone from Brasilia last Monday.

Planning, he found a hole in that green sea of ​​thick tops. And while hitting branches, it was losing speed. He lifted the nose of the Cessna 210 and wham… he was on the ground, soaked in gasoline, but alive. Aware. Whole.

During the following 38 days, he starred in an odyssey worthy of an adventure novel that allows us to peek into the new gold rush that Brazil is experiencing, the illegal mines that make so much profit while polluting the largest tropical forest in the world. They are populated with huts in the middle of the jungle with dozens or hundreds of garimpeiros (gold diggers). Places where nobody uses money, everything is paid in gold. An illegal business moves between 20 and 30 tons per year. And tolerance is such that a couple of years ago, Roraima, a state without a single mine, exported 194 kilos of gold.

That he survived almost unscathed – he lost 26 kilos – surprises even those who know this area between the states of Pará and Amapá. A jungle survival course he took a long time ago proved vital.

He slept far from streams to avoid animal ambushes. He is still amazed that he did not run into any of the great predators. Not a jaguar, not crocodiles, not anacondas. “To avoid attacks, he walked making noise with the leaves. If you go in silence, you can unintentionally bother them ”, he details. He has just reunited with his mother, who due to the coronavirus could not go on March 6 to receive him in Santarém, the Amazonian city where he grew up.

The military rescue teams had given up when Sena was located by a family of chestnut pickers. The clan led by Doña Maria Jorge, with half a century in the trade, is one of the thousands of families that exploit the Amazon in a sustainable way. And legal. The pilot had the joy of his life; their rescuers, a huge scare.

After the accident, he remained near the wreckage of the plane as required by the rescue manuals. When after nine days he stopped hearing overflights, he knew he was dependent on himself. He began a walk to the East guided by the sun because the aeronautical map that he carried on his mobile showed a couple of runways in the area.

He was too weak to hunt. To eat, he watched the monkeys “If they ate some wild fruit, I would too.” Little else he found while he was lost. “I ate rhea eggs three times, the only protein I took. Blue-skinned, they were white and yolk. And I found cocoa four times ”, he recalls. He was never satisfied.

The pilot got lost in an especially valuable area of ​​Amazonia, by the Maicuru Biological Reserve. Its biodiversity is such a precious jewel that it has the maximum protection of Brazilian law, explains forest engineer Jakeline Pereira, 40, by phone from Belém (Pará). “The human presence is totally prohibited because there are endemic species that do not exist anywhere else on the planet,” says this specialist from the NGO Imazon.

Sena, which has 2,400 flight hours, was heading to an illegal mine called 13 de Maio that lies within the nature reserve. The bumpy flight was Sena’s second there; the first was the day before. “I had never been in a mine in my life, but I didn’t see it because I didn’t get off the runway,” explains the pilot.

On the other hand, the engineer Pereira does know the place. “I made friends with a garimpeira from there and thanks to that in 2009 they opened their doors to us ”, he says about a trip in which he carried out a socioeconomic study on the mining settlement. Because, when the legislators granted legal protection to that natural reserve, the gold miners were already there. And there they continue. It is an illegal but tolerated livelihood. “I remember very well, there were like 400 garimpeiros, shops, some women, cooks, some prostitute ”. As there is no road that goes there, everything must go by river or by air. In the neighboring reserve, there were another 600 miners.

Sena took off in his tiny plane from Alenquer, a city on the banks of the Amazon. I’d land on one of those illegal runways that don’t appear on conventional maps, but have a name, California, for another gold rush. The largest in Brazil was in the 18th century in Minas Gerais.

The aviator says that he accepted the job – transporting fuel and food to the mine – because the coronavirus destroyed the business he created with so much care when he returned to Brazil after a stage piloting in Africa, in Chad. “I opened a restaurant and craft brewery, but in two months … Bang, the pandemic.” And he adds: “Those circumstances led me to make the flights,” he adds.

The demand for gold has skyrocketed due to the increase in international prices and that implies more men betting everything to find some nuggets that allow them to live comfortably, more supplies and more pilots. Illegal mining pays better than commercial aviation and air incidents in Amazonia have multiplied. The survivor assures that he will never return to the garimpo again.

The engineer explains that, as the deforestation caused by illegal mining is not so extensive, the satellites do not easily detect it. But it is very harmful. “They pollute the rivers, they dump the mercury they use to separate the gold there, the water changes color and contributes directly to the destruction” of flora and fauna. There each miner rents a plot that he exploits, some for years. “We saw people who hadn’t been to the city for 20 years.”

The pilot’s odyssey entered the final phase when he suddenly heard a chainsaw after days and days of loneliness, walking, hunger and severe pain. They were chestnut pickers. “I found a white canvas with their material, food … and I saw the first of them,” says Sena excitedly. “At first they were afraid of me, I asked them for chestnuts. Another, more talkative, appeared and we went to his camp ”. He insists on his infinite gratitude to Dona Maria Jorge, his sons and daughters-in-law. It is a paradox that he was saved by a family that legally exploits the jungle in the Paru State Reserve, where harvesting is allowed.

After feeding him, they radioed for help. The pilot lost in Amazonia was alive. Ready to go home. After 38 days, he was picked up by helicopter by a team of firefighters and the military. With that takeoff his odyssey ended.

Sergio Berni will leave when Cristina Kirchner defines him: the mystery is how long will Sabina Frederic hold out

Hot classic: were those expelled from Boca – River good?