The next step for faster payments: Interoperability 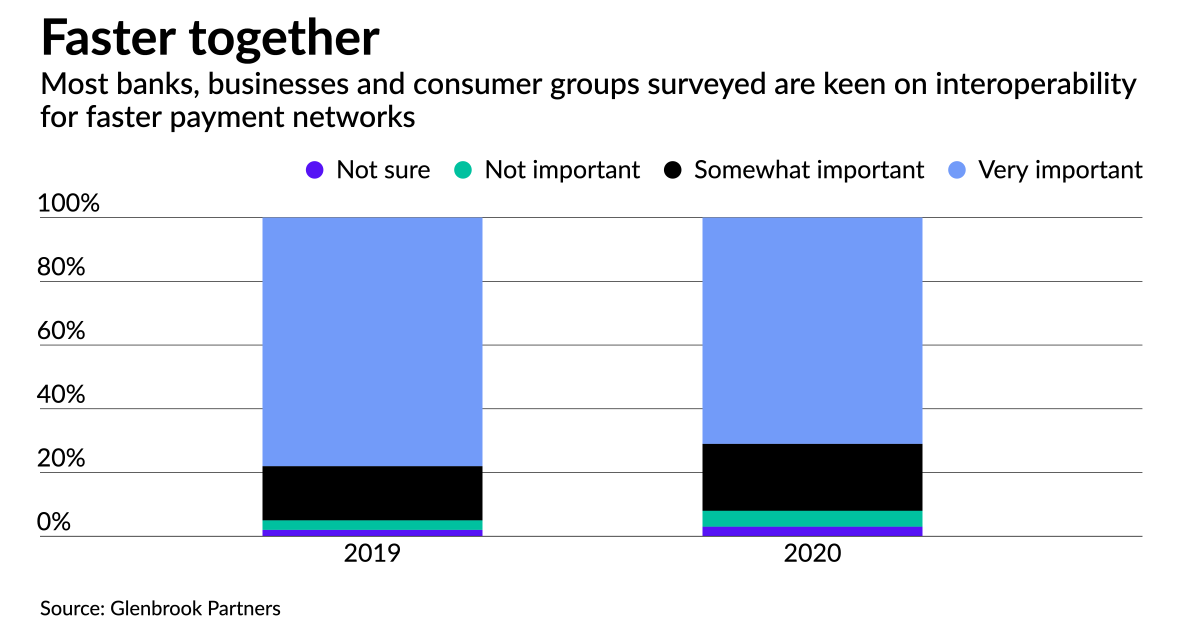 Since the first discussions about faster payments unfolded in the US more than seven years ago, a nagging question has been whether a system – or systems – could operate together under similar technology, security, operating rules and standards.

The US Faster Payments Council says the interoperability question has become the most important topic within the payments industry in the past few years. Nearly 80% of respondents to an online survey in 2019 and 71% in 2020 cited interoperability as “very important” across compatible faster payments systems, according to the council’s most recent research. Its report included interviews with financial institutions, business users and consumer advocacy groups.

It’s beneficial to the US to have multiple schemes in place like The Clearing House RTP network, the Same-Day ACH system and the coming FedNow instant settlement process. But despite an interest in making these platforms interoperable, they remain distinct.

“What we are trying to get across is that there is no single way this has to be done, and there are a few very successful models that work,” said Elizabeth McQuerry, partner at Glenbrook Partners, a payments consulting and research firm that aided the council’s work on the interoperability research as part of a three-year industry study on key aspects of faster payments.

“What the industry has said is that they don’t really care about the ‘how’ of interoperability; they want to know the ‘why’ of reach, ubiquity and user experience,” McQuerry said. “The industry is focused on consumer adoption and business uses, not the details of how to make it happen in the background.”

The Faster Payments Council formed in 2019 after recommendations from the US Faster Payments Task Force, which the Fed initiated four years earlier to outline a plan for developing a highly secure faster payments system.

The council’s initial sponsors included Visa, Mastercard, The Clearing House, JPMorgan Chase and various other banks and payments providers, while later adding Goldman Sachs and Netflix. Its goal was to gather input from industry participants on a regular basis – particularly when a topic was garnering overwhelming industry interest.

Interoperability of faster payments systems falls into that category.

Nacha launched Same-Day ACH in late 2016, providing another push for faster payments in the US, even though it doesn’t operate like a real-time payments network – but is considerably faster than the standard ACH transactions.

The Clearing House launched its RTP network in the US in 2017, providing a system designed by TCH’s 25 owner banks and set up through Federal Reserve guidelines.

FedNow, the Federal Reserve’s instant payments and settlement system, remains on track for a launch in late 2023 or early 2024. It would represent the first new Fed payments system in four decades.

On the sidelines, the instant P2P payment model was garnering bank and consumer attention, with the bank-supported Zelle network and PayPal’s Venmo as the major players. Those models weren’t garnering a lot of attention as an option for high-value cross-border payments, however.

“In the US we have Mastercard Send, Visa Direct, The Clearing House RTP and Same Day ACH,” said Reed Luhtanen, executive director of the Faster Payments Council. “But I also think about Zelle a lot here because Zelle is an example of a service provider that connects to all of those networks.”

Zelle users don’t have to know what network is being used, because it doesn’t matter to them, Luhtanen said. “You just send it on Zelle, and they receive it on Zelle, and in between Zelle chooses the network to reach those endpoints.”

“Interoperability is very important, but not just for a retail payment,” he added. “It is equally important when thinking about bill pay or B2B payments – being able to pay invoices through these systems.”

The connectivity is an important aspect, Luhtanen said, but so is the user experience.

“What is the user interface going to be like for a consumer to make a real time payment in a store?” Luhtanen speculated. “The user experience is so well defined for card payments; well understood, easy and intuitive. That is going to be a real key for unlocking instant payments in these various use cases.”

In many ways, payments stakeholders are simply looking for faster payments in the US to operate like the ACH model does today.

“It just works,” one respondent noted. “It’s the lowest common denominator network, and all [financial institutions] are connected. “

Others cited the interoperability of the telecommunications system as a good example in that users are never aware of the other person’s cell service provider when talking on the phone or communicating via text.

In the research based on global experiences, Glenbrook cited three models of interoperability – scheme, network and parallel system.

Checks, ACH and domestic card systems fall into the scheme category; cross-border or regional payments fit in the network category with bilateral arrangements for exchanging payment and settlement processes. Service providers acting as intermediaries for use of multiple schemes operate as parallel systems.

“With parallel systems, in terms of interoperability, it means there would be two systems running side by side, but not actually connected,” said Sam Levitt, partner with Glenbrook Partners. “But you would have intermediaries of sorts that would play a facilitator role, whether those are like your core bank processors, or other types of new fintech providers that pop up.”

Those companies would connect to each system and create “a façade of interoperability” in which they are able to reach the other network without being fully integrated or connected to it, Levitt explained.

Such a scenario emphasizes the role that middleware or a third party would play in interoperability, in that it can reformat messages and transactions and then send them on to the other network.

When the Federal Reserve set long-term goals for faster payments networks, it encouraged the development of multiple networks, in part to be able to determine what would work and which models were the best to move forward with.

“What we learned from the research is that some of the larger institutions with their resources, and with the absence of interoperability today, sort of forged their own path and implemented various payment methods, one-off,” said Nicole Pinto, partner at Glenbrook Partners. “I think that appears to be the trajectory that might be set initially for faster payments.”

A good example is the wire transfer system in which CHIPS (Clearing House Interbank Payment System) operates as a smaller subset of the “overall bucket of financial institutions using FedWire,” Pinto noted. “The path forward could look something like that, where institutions and businesses are implementing systems, one-off. Or there could be some middleware layer that stitches it all together.”

There isn’t much uncertainty about having so many faster payments options to choose from – if they all work together.

“Technology has enabled choice,” Glenbrook’s McQuerry said. “The market is saying it wants faster payments and needs it to be successful, but how it all exactly comes together is an important ‘To Be Determined’.”

No one is saying that the RTP is lacking in any way, or that Zelle is a lackluster option, McQuerry added. “They really want it all.”