The need in the middle of the second wave: a fair in the center of Morón was filled with manteros that sell everything 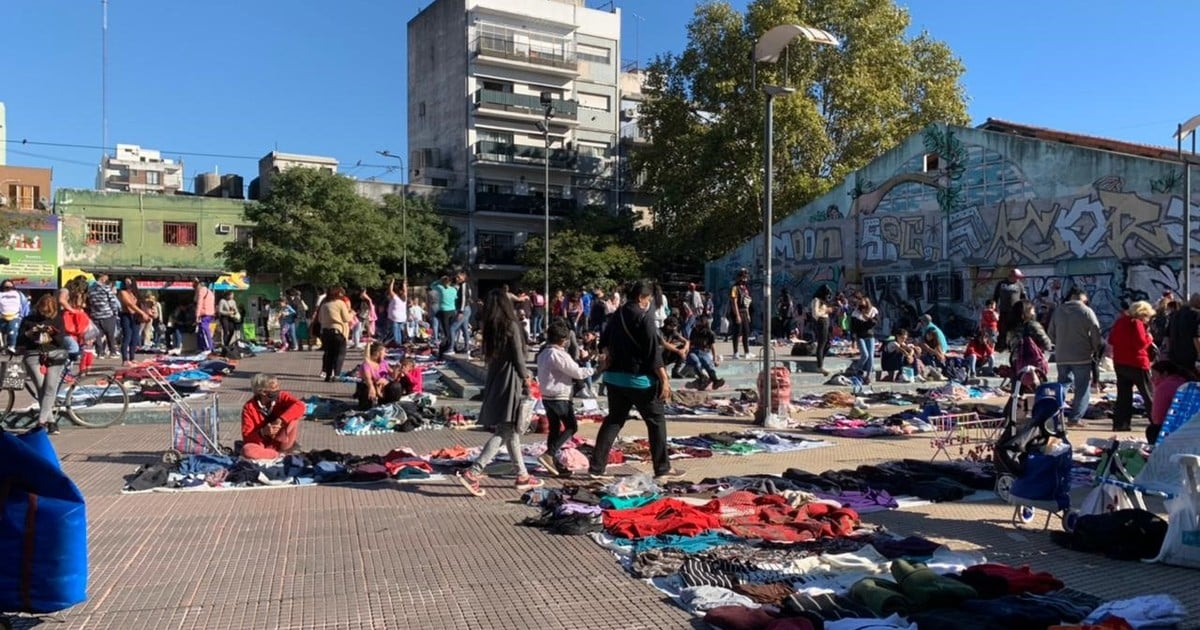 “If I don’t sell something else today, we don’t even have enough to eat,” laments María as she braids her daughter sitting in the corner of a blanket in which she arranged some things that looking to sell to get there, not at the end of the month, but at the end of the day.

Maria wears a butterfly mask and has a bottle of alcohol gel next to her. He tries to take care of himself, but says that not afraid of the Coronavirus because what worries him the most is “bringing a plate of food” to his family.

She and an important number of manteros became a open-air fair every corner of the square that is in front of the University of Morón, in that municipality of the western suburbs.

The items were expanded: in addition to used clothing, they now offer accessories, cleaning supplies and even deodorants or rice.

Most of the manteros that are installed in the square located on Larralde street, between Cabildo and Salta, a few meters from the Sarmiento train station, offer used clothing and accessories, but others add elements of personal hygiene, such as deodorants, and some grocery items.

“I started bringing rice and, since I have it for $ 50, sometimes I sell more of that than clothes, although this was essentially an American fair,” says one of the street vendors.

The fair is not new, but has been taking place for years mainly on Tuesdays and Fridays, although over time it has also been extended to the rest of the days of the week. However, the fairgrounds agree that in recent times many more people joined, most of whom are not from Morón.

The fairgrounds assure that there are more and more and that many arrive from other parts of the Conurbano.

This situation it is repeated in the main shopping centers of the West and caught the attention of neighbors and merchants who observe little respect for the protocols, crowds of people and sometimes no social distance.

The postcard of the center of Morón and other places such as Moreno, Villa Celina, Laferrere and Isidro Casanova, among others in the West, is given in the midst of the new restrictions imposed by the Government to stop infections in the metropolitan area of ​​Buenos Aires Aires (AMBA) that include the closure of shopping malls and activities in closed places and the prohibition of outdoor gatherings of more than 20 people.

“They demand everything from us and two blocks away is the fair where I don’t see any protocol. I understand the need of the people, but if the contagions grow, they are going to shut them down, ”says Rocío Godoy, in charge of a clothing store near the Plaza de Morón.

Before the dissemination of images and videos of fairs with a large number of stalls and attendees in different parts of the Conurbano, the Chief of Cabinet of the province of Buenos Aires, Carlos Bianco, confirmed on the TN channel that “Open air fairs are enabled” and that the municipalities must control compliance with protocols.

Regarding this issue, from the Municipality they assured: “It is people who come to win the mango in the middle of the economic crisis posed by the pandemic and they are not organized gangster groups. They are trying to give it a way out through an integral approach linked to the social economy, of micro-enterprises, trying to relocate the fair in spaces of entrepreneurs fairs, but it is work in the medium term. It is not a simple task. Meanwhile it is trying to control with Inspection “.

In parallel, since the restrictions on circulation due to the second wave of the coronavirus returned, large fairs such as the one that operates in La Salada and other points of the GBA have been prohibited from opening.

However, more informal ones proliferate and in the face of this situation, and after several complaints, in the last weekend and despite previous intimations from the CommuneSome stalls from the well-known shopping mall located in Lomas de Zamora were working early Saturday.

It was just a short time: municipal inspectors immediately showed up and forced them to close.

The voices of the worst night of repression of the protests in Colombia: "This is a hunt"

Music World-famous singer demands more than 16,000 euros from Helsinki for a canceled concert – this is how contracts are changed during a pandemic