The Nazarene of San Pablo, the Venezuelan image of Jesus that immigrants venerate in Caballito 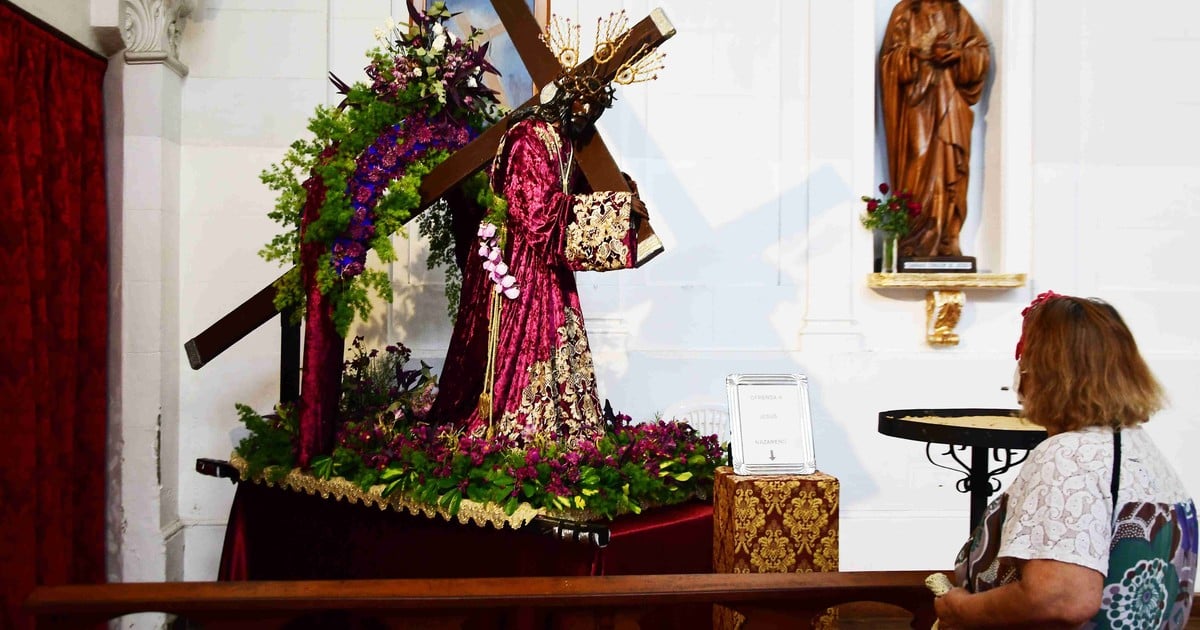 Any given day in 2019, Venezuelan architect Ángel Moya (43) was walking through the streets of Retiro. He was wrong: he had run out of savings for days, and since he couldn’t find a job, I survived singing in the subways. The work project for which he landed in Buenos Aires had fallen within hours of his arrival. Until he came across the Basilica of the Blessed Sacrament. Y everything would change.

“I went in, I started crying and got sick. My situation was desperate. The priest attended me, I told him I was an architect. I showed him my CV and after two days he got me a job in a church in the neighborhood, as a temple manager, “he recalls.

That was his first relationship with the Buenos Aires temples, which reached its peak on Easter Wednesday. Before more than 2,000 Venezuelans, he premiered his brand new work: a replica of the Nazarene of San Pablo de Caracas, the most revered image of Venezuela. It was in the Our Lady of Caacupé Parish, located at avenida Rivadavia 4879, full Caballito.

The idea arose from the consultation of several compatriots. As they knew that he worked as a temple manager, they asked him “where is it done? the mass of the Nazarene? “But in Buenos Aires there was no tradition of commemorating it every Holy Wednesday.

The Venezuelan architect Angel Moya was the one who had the initiative to make a replica of the Nazarene of San Pablo to put it in a Buenos Aires church. Photo Marcelo Carroll

Hence, Angel set out to find a church that would allow them to celebrate the traditional Venezuelan Holy Week. He visited Father Eusebio Ayala, who usually receives several faithful of that nationality and they began to work.

“On Holy Wednesday the Venezuelans arrived crying, on their knees, with candles, with flowers and the suits or purple clothes of the Nazarene – Moya says -. The father tells me that people keep going to visit the image. He is going to stay in the temple, and a brotherhood was even created: on the third Sunday of each month the mass of the Nazarene will be celebrated. “

Moya explains: “We migrants entrust ourselves a lot to him. The gesture of the Lord carrying the cross is a reflection of the suffering of those who had to leave the country. “The work was carried out thanks to the contribution of the Venezuelan faithful, who donated the money for the materials.

Moya affirms that the gesture of Jesus Christ represents the suffering of the migrants. Photo Marcelo Carroll

Grace Pérez (31) is from Caracas. She arrived in Buenos Aires in 2018. She is one of the Venezuelan women who visited the replica of the Nazarene on Wednesday of Holy Week. He did it for a promise that he had left in the middle when he left his country, and that he returned to Caballito. The emotional account: “My daughter was a baby and she caught bronchopneumonia. She was isolated, super bad. On the same floor of the hospital I found an image of the Nazarene. I begged him to save her for me. In return, I promised to visit his church for 8 Holy Weeks. ”

For the first four years, Grace was steadfast in the Basilica Santa Teresa, in Caracas, main center of veneration to the image of the Nazarene of Saint Paul in Holy Week. “We arrived at dawn to be able to enter. It was several blocks in a row. We were dressed in purple, in his honor. Even before emigrating, I never lacked“, He says.

The Nazarene of Saint Paul is especially venerated on Wednesday of Holy Week. Photo Marcelo Carroll

Grace lives in Lanús and has a restaurant-bar serving typical food in Avellaneda, called “La Gran Parada”. On Wednesday morning Nazareno is worshiped, he connected to a family Zoom: some were in Mexico, others in the United States, others in Venezuela. She and her family, in Buenos Aires. They prayed together. In the afternoon he traveled to Caballito. To the Parish.

“What impressed me the most was to see the faithful with the purple robes, as a promise,” he observes. “Some told me that they had been brought to them from Venezuela. At the place I met compatriots who I knew from my country and had lost their name. trail. Going gave me a moment of tranquility; a memory of what I did with my family. ”

The image of the Nazarene of San Pablo exhibited in a church in Caballito receives visits from Venezuelan immigrants on a daily basis. Photo Marcelo Carroll

After mass, a procession was held at the door of the church, which included drums and other typical instruments. Earlier in the day, the local priest had blessed the image, which is not the only one venerated by immigrants from the City.

Bolivians, for example, wait for the second and third Sunday in October. and celebrate the Virgin of Copacabana in Lower Flores. The last Sunday of the same month is the turn of the procession of The Lord of Miracles, highly revered by Peruvians. Mass is in the Basilica de La Piedad, in Congreso, and includes a walking tour of the area. And in December, the Paraguayans thank him and ask the Virgin of Caacupé. They go to mass and participate in a caravan.