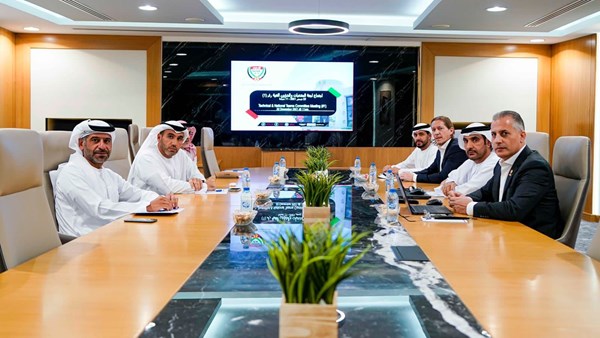 Dubai (Etihad)
The National Teams and Technical Affairs Committee of the Football Association held its first meeting today at the headquarters of the Federation in Dubai, in the presence of Hamid Ahmed Al Tayer, Board Member and Chairman of the Committee, Abdullah Salem bin Touq, Matar Mahmoud Al Hosani, Ahmed Abdul Rahman Al Tunaiji, members of the Committee, Michel Salgado, Advisor to the Committee, and Rashid Amer, Director of Administration The national teams, Hassan Fahd, head of the national teams support department, as a rapporteur, while Swaidan Saeed Al Naboodah, the vice-chairman of the committee, could not attend because he was outside the country.
Al Tayer welcomed the members of the committee, conveying to them the greetings of the chairman and members of the board of directors, praising the role played by the previous committee, and wishing the new committee success in developing plans and programs that would contribute to the development of our national teams.
The meeting discussed the items on the agenda, the most important of which is the file of the technical staff for the first national team, where the committee decided to make a recommendation to the board of directors to keep the technical staff led by the Dutchman Van Marwijk until the end of his contract in conjunction with the conclusion of the qualifiers in March 2022 and to provide all support to “Al-Abyad” in the rest of his career from Asian qualifiers for the 2022 World Cup for the first group account.
The committee decided to thank both Muhammad Obaid Hammad, the former supervisor of the national team, and Khaled Al Kaabi, the team administrator, for the period they spent with the national team, and assigning the committee’s chairman and committee member Ahmed Abdul Rahman Al-Taniji to supervise the national team during the coming period, while the team doctor was dispensed with. National Artukal Aranik and the search for a new doctor to work with the national team.
The committee reviewed the programs for preparing our national teams in preparation for the various football tournaments, whether the Olympic team, the youth born in 2001, the juniors in 2003 and 2006 and the work programs of the training and development centers, in addition to reviewing the reports on the past participation of the national teams, whether official or friendly.
Some of the names nominated for the position of technical director of the federation were reviewed, and other names were raised for discussion at the next meeting.